I grew up with Marmite, a British-origin yeast spread that's very similar to what the Australians call Vegemite.  It's very familiar to me, and I still enjoy it very much;  but judging by Miss D.'s reaction when I invited her to taste it, that's by no means a universal reaction. 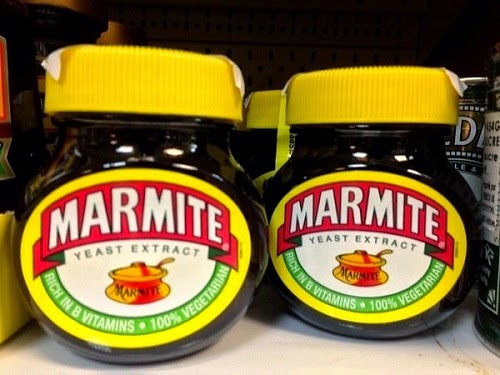 According to the Telegraph:

Chris Broad has been teaching in Japan since 2012.

Broad asked four friends to try the British spread and filmed their reactions, which ranged from confusion to utter repulsion.


There's more at the link.  Here's the video of how they reacted.

As an unabashed Marmite fan, I'm both amused at their reaction, and glad that there'll be more of the stuff for me!

With Marmite and Vegamite, it's either pure love or abject hate. Nobody is in the middle.

I've noticed that the movie "The Gods Must Be Crazy" is like that too.
Either love or hate.

Me?
I'll eat some Marmite while I watch the movie.

I too love love Marmite. Anyone else remember toy soldiers-- slices of buttered toast with Marmite? In fact, my favourite way to eat it is by simply putting a spoonful in hot water to make Marmite tea. I cannot understand the dislike for it, but as you say, that leaves more for those of us who do love it. Cheers!

Sir, you are truly most welcome to your stock of Marmite... Indeed, please persuade everyone you know to buy up all retail stock in your area, so that there might be less of it on the shelf over here.

The only use I've found for the stuff is as a quarter-teaspoon size seasoning in a 2pint pan of gravy.

I think I read somewhere that there are slight variations in taste of Marmite depending on which Commonwealth nation manufactured it. Has something to do with the yeast, I understand, but Marmite from UK tastes different than Marmite made in New Zealand, or from your own South Africa.

Love it! A freing from SA/Namibia introduced me to it. Oddly enough on my Safari in Namibia they didn't have it camp. When you talk about having a beer in Swakop, brings back great memories. I hope to get back there next year....

It's great in a mousetrap - on toast not so much.

Marmite and Vegemite = culinary crimes
Someone should be held accountable.

Being a lover of Vegemite I have seen many try it for the first time and their reactions to range from confusion to disgust with a wide range of variations in between. One mistake they always seem to make is to treat it like Nutella and slather it on in far too great a quantity. When it comes to Vegemite and its derivatives less is definitely more.....and for you Vegemite Virgins put some butter on the toast first. :)

Had it in Scotland. Tried haggis after. I liked Haggis more, mostly because it got the taste of Marmite out.

I'm Cajun. We eat a LOT of different things. I've lived in Korea and enjoyed the local cuisine there, and I had a riot in Germany.

I tried Marmite on a whim. It's not a subtle flavor.

I'm glad Amazon will deliver it to my doorstep, because I do enjoy it from time to time.

I used to have to get it at whole foods, but some Jewels have it now. I wish i could put my hands on the south african stuff.

You mean to tell me that New Zealand Marmite might be worse than English Marmite?

NZ Marmite, proudly brought to you by the Sanitarium company. Fitting.