In April I wrote of Father Adelir Antonio de Carli, who set out suspended beneath a large number of helium-filled balloons to break the record for such a flight. He disappeared out at sea, as you may recall. 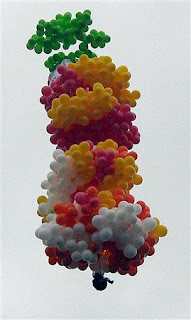 Sadly, a body found floating in the Atlantic Ocean has been identified as that of Fr. de Carli. Searchers had earlier found some of his balloons.

I'm sorry for the good Father . . . but if one insists on doing such stunts right next to the Atlantic Ocean, I'm afraid one daren't forget that Mother Nature is a real bitch! She doesn't care about your motives or intentions. She'll kill you without a second thought.

Oh - and Murphy's Law applies even to priests!

No method of steering and launching next to the ocean. Yes, THAT was a bright idea. I'm sorry it turned out the way it did, but to say that was morbidly stupid would be puttig in lightly.