Armed, yes - but are they dangerous?


I'm a little befuddled by a picture in the London Daily Mail of Chinese anti-terror police - mounted on Segway scooters. Click it for a larger view. 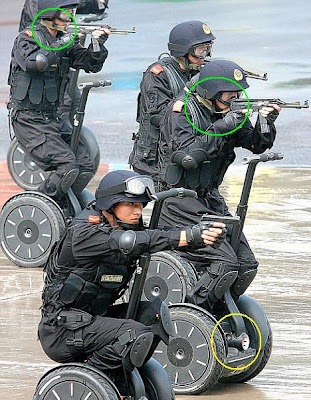 I have to applaud their innovation in using Segways as police transports. In crowded urban areas they're probably rather more useful than cars or vans. I even like the dinky little siren they've added - see the yellow circle at the bottom of the picture.

However, I can't quite figure out their method of operation. To shoot on the move, one would have to release the controls and adopt an unbraced sort-of-squatting position, as seen in the picture above, and in this one from China News:

The Segway isn't as steady a shooting platform as solid ground (or a car, for that matter), because it's gyro-stabilized. Your movements on it as you get your weapon into a firing position, and/or crouch down, will make it rock. There's also no space to take up a braced shooting position, only an unbraced crouch, as the figures in the photograph illustrate. I don't think that's going to help your accuracy very much.

The Segway was demonstrated as a useful tool since it allows soldiers, once they are trained in balancing and maneuvering the machine, to keep both hands on their weapon while still accelerating and turning the device with their body movements. In skilled hands, a Segway could be kept still enough to offer a stable position from which to shoot.

However, I remain unconvinced. What might work fine in an unstressed demonstration environment may not work in a crowded street when the riders are under fire! There's also the factor of the surface to consider. On a smooth, newly-paved surface, things might be OK: but on a bumpy, rutted surface (as will often be the case in reality), that's a whole new ball game as far as shooting accurately on the move is concerned.

And what's with the dinky-toy-size AK-style rifles the cops are carrying? Can anyone identify the specific model of weapon they're using? Note that they have no shoulder stock, not even a folding one. Instead, they have a sort of webbing loop at the rear of the gun, which appears to pass around the neck (see the green circles). This is probably great for ease of carrying the weapon (you can simply let it dangle in front of you), but I'm not sure it'll be conducive to accuracy at anything beyond handgun range.

I'm also at a loss to understand why the Chinese have "painted some [of the Segways] in military camouflage", according to the report. Huh? A Segway with a cop in full uniform on the back - with a camouflaged control stick? Look at how small and insignificant the stick is, in comparison to the people riding on the back. What good will camouflage do?

I suspect someone didn't think this all the way through . . .

Remember- with every six Segway clones purchased you get a free eggroll.

Maybe they're expecting a really large mob, in which case accuracy would be of less concern than volume.

In any case, I'm sure the Segways will wind up with high-ranking officers children.