OK, it's economical - but how safe is it?


I'm intrigued by press reports of a new vehicle from Volkswagen, a concept car that may be going into production. It seats two in tandem, the passenger behind the driver, and has a minuscule luggage capacity: but it's claimed to get fuel economy of better than 1 liter per 100 km., or almost 237 miles per US gallon. 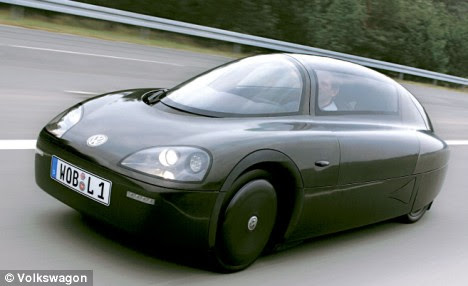 Volkswagen hopes to have it on the market as a limited edition from 2010.

The two-seater runs on diesel and the tank holds just 1.4 [Imperial] gallons (6.5 litres). But it is so fuel efficient that a full tank could last you for more than 400 miles.

Its efficiency is helped by its aerodynamic design. Shaped like a teardrop, it has tandem seats like a jet fighter with the passenger sitting behind the driver, a gull-wing door and sheathed wheels.

Even wing mirrors have been dispensed with. Cameras and electric displays help the driver to see what's behind from his cockpit-like seat.

The car is made of carbon fibre composites and uses one single cylinder 0.33 litre engine [just over 20 cubic inches].

The magnesium steering wheel adds just one pound and, to keep it as light as possible, it is not even painted, so potential buyers are likely to have to settle for the default black.

It is also a 'smart' car: The engine turns off when the car is stopped at lights and automatically restarts when the accelerator is pressed.

It's an interesting concept, all right, and I wish VW luck: but this, as with so many other smaller vehicles, makes me wonder whether the quest for fuel economy hasn't driven roughshod (you should pardon the expression) over concerns about safety.

What happens if one of these fiberglass fuel-sippers is clobbered by a passing eighteen-wheeler?

Will there be enough left of its occupants to even identify, let alone bury?

I'm forcibly reminded of the far greater risk of serious injury in something so small and light. One reason I'm still driving a full-size pickup is the work-related injury I suffered back in 2004. After two surgeries, I've been left with permanent nerve damage and my back held together by strips of titanium. The doctors have warned me fairly bluntly that if my spine suffers another major trauma, I'll probably be either dead or paralyzed. That being so, I'm sticking with my large, heavy pickup, thank you very much, high gas costs notwithstanding! I want lots of metal and a good strong chassis around and beneath me, just in case!

What say you, readers? Would the promise of that sort of fuel economy assuage your concerns over safety and injury?

That VW looks like a rolling casket; no thanks! I opt for safety. After a cross-eyed/drunk/ignorant jackass with a gun shot out one of my truck tires, I struggled for control on a winding two-lane road. My truck hit a roadside ditch and I flipped four times (end over end, twice, then side over side, twice) but walked away *unscathed* because the solid oak planks of my old truck bed took the brunt of the impact.

Well, I commute to work on a motorcycle... this is my tenth motorcycle and I am 54 years old. I am a cautious rider, but sometimes no matter how careful you are, accidents happen. So there is always a risk involved. By the way, the national average for deaths on the highway attributed to drunk driving is about 64,000 per year. I don't drink.

Over the many years I have totaled a few vehicles (always me being hit by someone else) and dropped a few motorcycles (my own damn fault every time).

I choose to drive a 4x4 full size truck with an excellent safety rating. Yes, it costs me $ in fuel. I don't really care. I'd rather be alive and poorer, than dead with a bag of change in my closed coffin.

SUV's are more prone to rollovers, at least partially offsetting the benefit to the SUV occupants of their extra mass.

I think the value of small size and maneuverability is underrated in avoiding accidents. Then again, I'm biased--I prefer to drive a car that is just big enough for me to sit comfortably.

(No idea if the VW is maneuverable, and I wouldn't be surprised if it is either much more or less structurally sound than a traditional vehicle.)

A UK residents point of view - "How far can I afford to travel when diesel is now $11.82 per Imperial gallon here in the UK?"

Everyones financial circumstances are different, but I dare to suggest that as oil becomes ever more expensive even low-tax fuel as enjoyed by most Americans will become prohibitively expensive for use in uneconomical vehicles, regardless of personal preference.

If a cheaper version of this can be mass-produced, it will be taken very seriously indeed over here; even if the cost cutting results in a slightly less economical version it will still be far cheaper to run than a conventional small car.

Go to it VW, and remember your very 1st car and the design philosophy behind it.....

You could not pay me enough to get in that car. I have a phobia of small cars and learned to drive in a Chevy sailtop conversion van. I've got my heart set on a Jeep Patriot, which I've already test-driven, and the safety features are most impressive. As is the mileage. It's a heck of a lot safer than a lot of cars on the road and in production.

Living in a rural area with lots of farm trucks, 18-wheelers and tractors, a small vehicle like that just isn't very practical. You're more likely to get in a wreck with a honkin' huge SUV or a big diesel pick-up than you are with a little car. And in that pile-up who's going to come out better off? The guy in the SUV or the truck. That very scenario happened to my sister a couple of weeks ago and her little VW Bug is still in the shop. The truck in front of her and the SUV behind her just had yellow pain on their bumpers.

Reminds me of the story about the toaster made by NASA: Cost $20Mil, estimated life 100 years. This is a Messerschmidt KR200 Kabinroller
http://www.3wheelers.com/archives/archive1/Schmitt1.jpg
made by the ESA. The original was slow and cheap, both to own and to drive. The new version has been gold-plated.

I don't see the problem with a small vehicle, since I have spent a lot of time riding motorcycles. Smaller vehicles tend to be much more maneuverable than larger ones. Easier to avoid the accident, than to depend on a bunch of metal to protect yourself.

Of course that depends on riding a bit paranoid, but with all those drivers of larger vehicles out there, there is no other reasonable way to approach it. There is almost always a bigger vehicle.

I've seen a full sized pickup flattened by a tractor trailer. If only the pickup driver had been driving something about 10 times bigger . . . . :-)

This reminds me of the Smart cars you see all over Europe and strangely, now in some parts of the US.

It's also a 2 seater, though side by side, has almost no storage space and at 6 foot long is able to park almost anywhere.

The downside is that when it wrecks it does so spectacularly and invariably fatally.

I'm with you. I have three areas of my back and neck already held together with steel rods due to accidents that were entirely some other idiots fault.

I'll stick with my full size, extended cab Chevy truck. Thank you very much. If I could afford one, I'd be driving a Humvee and I mean a real, military Humvee not the mom, soccer car Hummer that is sold to the general public.

I wouldn't even accept a ride in a car like this VW if my truck was broke down. It would be safer to walk.

I feel comfortable in my Ipala. An 02, it's 3000+ pounds, and gets 35 on the highway. An SUV isn't necessary to be safe, most larger sedans are excellent in the safety rating, and get much better mileage than SUVs.

Safety is always sacraficed in the name of fuel economy. It has to be, given that the only variable that can change (for now) is weight.

I would be interested in the US version of this car - it would be a great commuter vehicle. No doubt the gummint would mandate changes in the name of safety.

Course, at $46k, and 6'4", 310lbs, it is out of my range!!! When these concept cars choose to build into their concept the concept of comfortable space for large Americans, THEN I will get really interested.

But I love small cars, and I'd probably get one if they dropped the price by two-thirds.

And then I'd remove that anemic diesel engine and cram a motorcycle engine in there, heh :)

That diesel might not be as anemic as you think. The tech has come a long way in the last few years. The Europeans have led the way in the tech, since the engines provide much better mileage than gasoline.

When I was younger I bent an Escort wagon so badly the glove box would no longer open. (other guy's fault, noway to maneuver out of it, only to minimize it) After that I tried to stick with larger cars. This paid off for me a few years ago when a beer truck slid to a stop in front of me. Being tall, wide and strong, the Bronco I was in lost a foot off it's front end, but I walked away without as much as a sore muscle. In a smaller, lower vehicle, the other truck's bumper would have skimmed the hood and crushed my chest.

Since then I'm willing to pay the extra in gas money to have more protective mass around me. Right now that choice is another full size Bronco and a Crown Victoria