Following my post yesterday about the dangers of relying on calling 911 for assistance, I've had a few e-mails asking me to suggest a suitable firearm for home defense. (I might add that the famous Fred has a new column up, reinforcing what I said yesterday. It's worth reading.)

Let me give you a little background about me first. I've taught basic firearms use and safety procedures to many people over more than twenty-five years, first in a foreign country, then here in the USA. I work mainly with disabled and/or handicapped shooters, because they have very specific needs and circumstances that aren't well understood by many instructors - it's a specialized field. Suffice it to say that I think I know my stuff, and I offer these suggestions from that background.

I don't propose to go into the whole field of how to select a firearm. Everyone's choice will be affected by whether or not they want to carry the firearm around with them (in which case a handgun is far more concealable than a long gun); the amount of training they're willing to put in; their capacity to master the firearm in question; etc. A really superb resource discussing this may be found at The Cornered Cat (it's also listed in my sidebar). Kathy and her friends have done a magnificent job in covering the basic issues, and I see no reason to try to improve on their efforts (largely because I can't!). See the section on Choosing Firearms and read the articles provided. You'll learn a lot, and it's all good advice. (Take the time to read the rest of the site, while you're at it. It's a fount of good ideas and information.)

For the purposes of this article, I want to concentrate on something that's suitable for home defense, and that satisfies three issues:


My recommended home defense weapon for a complete beginner is a twenty-gauge (20ga.) shotgun. The 20ga. has considerably less recoil than the more common twelve-gauge (12ga.) shotgun, and is very controllable even in novice hands: but it nevertheless packs a considerable 'punch', more than sufficient for defensive use. I invite those who scoff at the 20ga. to consider the following table. It compares the 20ga. buckshot and slug rounds to the 12ga., and to common handgun and rifle law enforcement rounds. The energy comparison in the last column might surprise you! 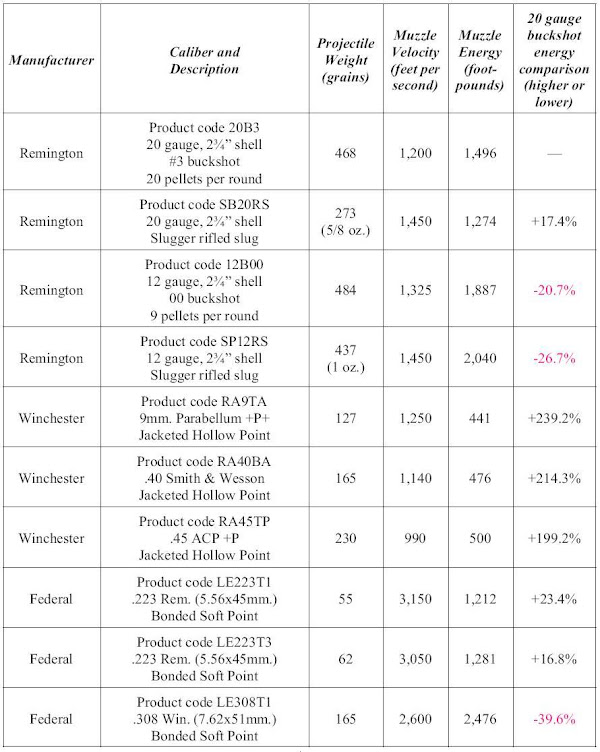 All figures for bullet weight, velocity, etc. are taken from the respective manufacturers' Web sites. You'll note that the standard 20ga. buckshot load has three times or more muzzle energy than any of the handgun calibers, and quite a bit more than even the .223 (5.56mm.) rifle round, which is the standard issue of our Armed Forces in their M16 rifles. It's not far behind the bigger and heavier-recoiling 12ga. rounds, either. It's got more than enough punch to do the job, provided that you put the rounds where they need to go. Those who say that the 20ga. isn't big enough or powerful enough for defensive use simply don't know what they're talking about - and you can tell 'em I said so!

I further recommend a pump-action shotgun (also referred to as a slide-action), rather than a semi-auto weapon. This is because a pump-action is very easy to manipulate, simple to learn, and isn't affected by lower-powered ammunition. A semi-auto shotgun has to be kept very clean and properly lubricated, and doesn't like being neglected: and lower-power practice ammo (which can be purchased cheaply - an important consideration) may not cycle its action properly. Those concerns simply disappear when a pump-action is used.

I also recommend buying the Youth model of a shotgun, rather than the full-size version. The Youth model is shorter than the standard models, and easier for people of short stature and/or lighter body weight to manipulate. This is important! A big, strapping male may be able to handle a full-size shotgun very easily: but what if his wife, or girlfriend, or teenage child, has to take the shotgun and use it to defend themselves - or him? They won't be able to handle it so easily. A smaller shotgun, on the other hand, can be used by anybody and everybody. Large men can easily adjust to its size, and smaller-statured persons won't have the same problems with it as they will with a full-size gun. If both men and women will shoot this shotgun, or may do so in future, then a Youth model is definitely the way to go.

As for a specific make and model: I recommend the Mossberg 500 Bantam to most people. There are no less than 17 models listed on Mossberg's Web site, but the specific model I recommend most is the 54132 (third from the top at the link). It's pictured below.

There are a number of reasons why I recommend this particular shotgun:


Finally, I recommend buying a new shotgun rather than a used one. There are three reasons for this:


There's a lot more to say about suitable defensive ammunition, initial and ongoing practice, etc. I'll address those topics tomorrow night. Meanwhile, I hope this has given you some food for thought.

What are your thoughts on that trade off?

Steve, you're giving up 2" in barrel length and 1" in LOP. I'm not sure that a 3" change is going to make that much difference in going through doorways. 6" or more, sure, but the difference in this case is far less.

Another factor is that the weight drops from 6½ pounds to 5¼. This makes it lighter and handier, but a 20% reduction in weight translates to about a 15%-20% increase in recoil. You'll notice this particularly with buckshot and slug loads. It'll make the 20ga. recoil feel about the same as a full-house 12ga. Can you live with this?

Other than that, sure, your choice is a good one. Enjoy!

Be sure to save these posts somewhere for easy access. Lots of good info.

I'll be getting a 12 gauge myself at some point, mainly because I won a case of ammo and targets at a raffle. But I can certainly see why you recommend the 20 gauge.

Peter - thank you so much for this series. I can personally attest to the wisdom of the youth-model Mossberg for short-of-stature folks. With the benefit of some superb instruction (THANKS, Peter & Lawdog!), I found the handling and firing of this shotgun much more comfortable in practice than I'd feared it might be. What you've written here is a great source of information for folks trying to make the best choices for home defense.

Ten yrs ago I walked into my local Dick's Sporting Goods store and found a returned (but practically new) Mossberg 500 Persuader 12 ga with 26" bbl on sale for $159. I snapped it up and then got myself a 16" Hecho in Mexico barrel off the Internet for $29 plus $5 UPS delivery. It's been under the bed since except for its yearly visit to the range.

I go to sleep every night in peace knowing that firearm is within arms reach.

FWIW, I find Mossberg 500s up her in pawn shops for $125 with regularity. True, they are not pretty, but they are functional. These particular shotguns usually have a full wooden stock and a non-ribbed barrel with a 5 round magazine.

If you need a couple, let me know.

I would suggest that you replace the ammo at least once a year.

Take the old out and practice.

Please note that ammo kept in an airconditioned and heated home will last for years. But.....

You never want to pull the triger and hear a pop in stead of a boom.

Another reason to use a shotgun for in-home defense is the old saying that you really use a handgun just to fight your way to your shotgun.

My local sheriff (former Marine and retired federal officer) told me years ago that a .410 with double-oh or a slug was the best choice. Practically no recoil to consider, one hit he said would be as effective as at least six hits with a 9,mm pistol, and no significant danger of a missed shot continuing to the other end of the house, striking someone there.

They make pump .410 shotguns, too. Mossberg is an excellent choice for this use; they used to have the contract for the armed forces.

@Rev. Sensing: I agree, with the caveat that a .410 is a very light load, and not nearly as effective as a 20ga. or 12ga. For example, you can buy revolvers such as the Taurus Judge, which fire either .410 shotgun rounds or .45 Colt cartridges. The latter delivers more energy and effect on target than does the former! For that reason, I suggest the .410 only to those who really can't handle the recoil of a 20ga.

Another key advantage of a pump shotgun is the unmistakable sound of chambering a shell.

My mother discovered this many years ago when home alone at night with small children (Dad was off doing World War II). She heard sounds of someone outside checking the windows, so she pulled the 20-gauge from under the bed (Dad was sure that she knew all about it, & those were different times anyway). Once she jacked the pump back & forward to chamber a shell, all she heard was someone beating feet out of there. She called the base police & all they found were large men's footprints around a couple of windows.

Nothing else in the world makes a sound like that. But with all the drugs so freely available today, it's best to know that you will need to be prepared to follow through with a well-aimed shot to center-of-mass.

Appalachian Gun Trash-- Don't you mean a 18" Hecho in Mexico barrel? Cause legal minimum length in US is 18".

Thanks for a great article.

In Aus pump-action and semi-auto are not an option sadly, so given the alternatives (lever, bolt, double etc) what would you recommend?

On a similar vein: http://www.chuckhawks.com/savage_slug_gun.htm

Never heard of slug guns before, and can they fire shot?

Luan, a slug gun has a rifled barrel, so it won't pattern well with birdshot or buckshot. Great for firing slugs at longer ranges, of course.

There's nothing wrong with a good double-barrel shotgun. Their only deficiency in relation to pumps and semi-autos is limited ammo capacity before you have to reload; and for home defense, if you train yourself to put your rounds where they need to go, and have a couple of reloads between the fingers of your support hand, you can take care of a lot of business if you have to.

I've never used a lever-action or bolt-action shotgun, so I can't comment from personal experience. I know the early Winchester lever-action shotgun was well thought of in the late 19th century, and modern Chinese-made replicas of it are available.

(I thought defensive use of firearms was pretty much a no-no in Australia? Don't your police and courts frown on it?)

I was wondering if 20 gauge slugs will go through the different choke tube without damage to the barrel. The wife has an O/U she really likes.

@jeff campbell: Generally, yes, they will; but it'll put excessive strain on the barrel and choke threads if your choke is any tighter than Modified. For slug use, I typically use an Improved Cylinder choke, and never greater than Modified.