Of sports, drugs, technology and lawyers


I'm getting more and more fed up by the big-moneyed professional sports - and by the increasingly tangled legal and other shenanigans going on around them.

In recent months we've seen (across the globe) lawyers filing suit to enable - or restrain - transfers of players between clubs; disputes over how much or what percentage of game earnings should go to players and the owners of the club(s) or ground(s) concerned; lawsuits and countersuits over drug tests; exclusions from contracts due to off-the-field behavior, etc.; and the generally bad behavior (think of a spoilt kid throwing his toys out of the pram) of many international sports figures.

The latest dispute to catch my attention involves a British lawyer, Mike Townley. He's a partner in Bates Wells & Braithwaite, solicitors, in England. Their Web site describes him as 'head of sports', and gives a glowing list of credentials, 'achievements' and endorsements. I note with concern that he also runs 'a commercial sports marketing and athlete management company'. That sounds to me like he's promising his athletes that if they can't win any other way, he'll sue their opponents until they do!

Mr. Townley has just successfully challenged the Olympic qualification of Alex Parygin, an Australian modern pentathlete, and had him removed from the Games in Beijing. He's now threatening to challenge another Australian athlete.

How low can the British stoop? So low that a British lawyer claims Australians cheated, by inventing and changing official scores, to ensure the Australian female modern pentathlon competitor Angie Darby qualified for a place at the Beijing Olympic Games.

He has demanded she lose selection immediately.

The lawyer, Mike Townley, is working for a Greek athlete, Donna Vakalis, whom he says should take Darby's place at Beijing.

Mr Townley has threatened the Australian Olympic Committee that he will head to the Court of Arbitration for Sport, where last month he was successful in having Australia's other modern pentathlete, Alex Parygin, rubbed out of the Games.

But the committee is so outraged it has formally complained to the International Olympic Committee president, Jacques Rogge.

"Angie is in the same spot as Alex. She was told she was going to Beijing and now this Olympic dream is being ripped off her through not honourable intentions," the AOC director of sport, Fiona De Jong, said.

Rogge has yet to reply to Australia's complaint.

"It is absolutely disgraceful what this man is doing," Adams said. "He was very underhanded and unsportsmanlike in seeking out the Greek girl and he is picking on the little guys.

"Here we have a 21-year-old girl who has had no funding and paid her own way to compete, now up against the powers of the sport in Europe."

The court ruled Parygin, who was affected by equine influenza restrictions, had not qualified because the official events in which he competeddid not have enough international competitors. It gave the vacant spot to a British competitor, Nick Woodbridge, who was represented by Mr Townley in court.

Quite frankly, I'm disgusted by this. What business do lawyers have challenging the selection of athletes by their native countries? If their clients want to win, let them do so in the time-honored fashion, on the field of competition!

The use of drugs to cheat one's way to the winner's podium is well known, and a very difficult problem. Equally difficult is the impact of technology on sport. A very recent example is the new Speedo swimsuit, the LZR. Ever since its introduction last year, athletes wearing it have improved their times by 2%-5%, shattering many world records in the process. As a result, those athletes who aren't wearing it don't stand much of a chance in competition with those who are.

I find this reprehensible. If the suit's giving athletes an advantage, why not ban the suit? I certainly don't regard those holding world records, taken while wearing it, to be the legitimate holders of those records. They relied on technology, rather than their own skill and fitness, to break them. That's not sport. As a former world champion has said:

The common theme appears to be the new high-tech suit, which was shrouded in secrecy until its celebrated release on February 12.

"Any time you introduce performance enhancing technology into a sport the playing field becomes a little less even.

"A lot of people don't have access to the suits, so that makes it a little less even than it used to be.

"In my day all you had to remember was an old swimsuit and a towel and don't even worry about the goggles.

"I just have some concerns when technology is such an important factor in success.''

When asked if the suits had something to do with the deluge of world records, Rose replied: "There's absolutely no question.''

This is the story everyone in the swimming world will tell you is not a story, but the facts speak for themselves.

This emphasis on winning at all costs is even affecting animal sports. As an example, consider this abomination: 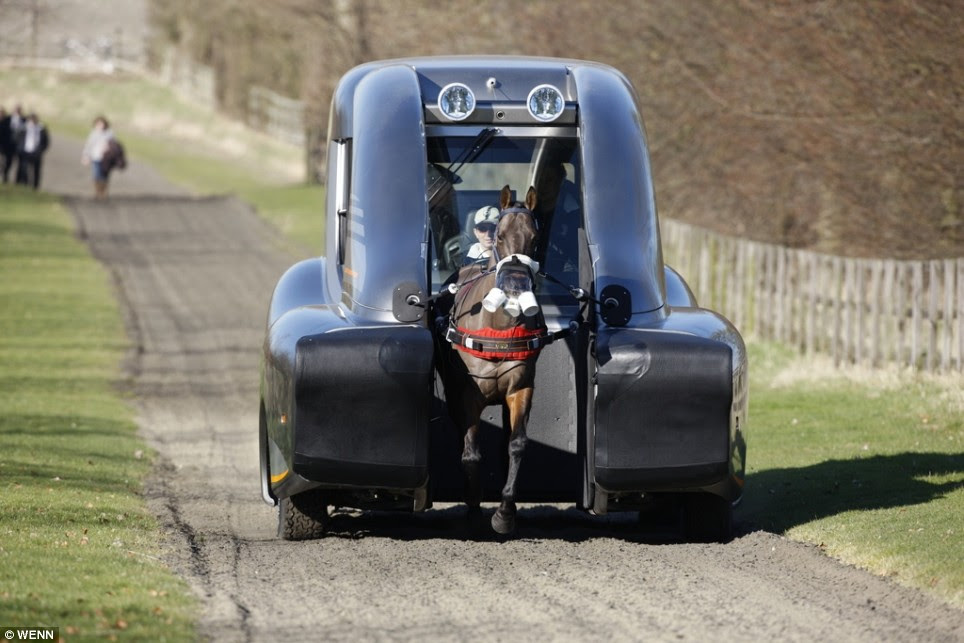 The vehicle can travel at quite a gallop and is designed to monitor animals at speeds of up to 38mph.

The four tonne trainer was built by Rousch Technologies for Turkish-based Kurt Systems. It is powered by a Volvo diesel engine and has a hydraulically controlled silicone saddle to simulate different jockey weights as well as electronically controlled reins.

The trainer has an open front stall where the animal can run, and a rear mounted cabin that allows a driver, a veterinarian and a trainer to keep a keen eye on vital signs. Onboard systems power computerised heart, blood, oxygen and fitness monitors.

'The trainer will be able to meet the increasingly sophisticated demands of the race industry worldwide,' a Kurt Systems spokesman said.

'We believe that our approach to controlled environment training will become established practice with many studs and stables at this level.'

He added that the trainer would now go into serial production.

Honestly, looking at that contraption, where's the compassion and care for animals that used to motivate their owners? They treat them like dirt when they lose (often selling them to dog-food factories); they shoot them when they get injured in training; and now they're going to make them train in a completely unnatural, artificial, machine-driven setting like that machine. How do you think the horse likes it? I doubt very much that it does - or ever will!

How can the owners or trainers expect us to believe that this sport is still 'natural', still 'the best horse wins'? Of course it isn't! There's no care or concern for the animals at all, except as money-making machines. The same goes for dog-racing or any other animal sport.

I'm more than a little fed up with professional sports in general, I'm afraid. I don't watch them at all - I've even shut down my TV service. I'd rather go to a good school game, or Little League, where at least the vestiges of sportsmanship remain.

A number of years ago there were rumors that the IOC wanted to invite aerobatics into the Olympics. The international aerobatic community politely declined, since the sport is as much about equipment as it is about human skill, and we have our own contests, rules and venues
LittleREd1

Sorry, Peter. I have to disagree with you on one point.
Technology has been a part of the world of sports and the Olympics for many years, now.

From innovations in training and nutrition to equipment, technological advances have moved the Olympics forward.

For an example that hits close to home, look at the specialized equipment that Pentathloners use. From quick release bindings on the skis to the high-precision rifles, with balance adjustments, custom fitted stocks to personalized metered sights. Pistol shooters, too. Look at the specialized pistols, with ergonomically formed handgrips, custom sights, recoil systems. Were olympic athletes using these kinds of firearms 50 years ago? No. Someone showed up at the game with a custom grip, shot better than the rest, and at the next games moer shooters had that kind of advantage. And so it went.

Archers use huge amounts of tech! Counter-balancers, peep-hole sights, trigger releases, vibration dampers, and computer-designed cams to maximize thrust at release! Heck, I could almost compete with all those advantages!

Innovation is used to drive the performance to new levels. Until everyone else has the same. Then the playing field levels again, and the sport moves on.

At the next world swimming competition, someone else wil have a different high-tech swimsuit, and they'll be causing the stir. Eventually, the field will be level for all competitors again.
And the sport moves on...

Ona related note, the horse-training "monstrosity" is a similar move forward. Look at it as akin to a treadmill for a runner. You see human sprinters and marathon runners on treadmills, hooked up to all kinds of monitoring equipment all the time.

It's how they monitor their performance and track improvements in training styles, nutrition, technique, etc.

Horses won't run on a treadmill, so they replaced the treadmill with a mobile monitoring station. If you look closely, the horse is wearing blinders: he can't see the vehicle following him.

All he does is run, and the team monitors him as they would any athlete.

As for how they treat the horses, don't we do the same thing to all our athletes???

And the sport moves on...