Of climate change - and violins???


A BBC report sheds new light on why the violins of Stradivarius and his contemporary craftsmen sound so much better than their more modern competitors.

The unique sounds of a Stradivarius violin may come down to the density of the wood it is made from.

Scientists say the patterns of the grain are markedly different from modern instruments.

It is believed that the seasonal growth of trees in the early seventeenth century was affected by a mini-Ice Age.

Stradivarius had the benefit of wood that was produced in conditions that have not been repeated since then.

Researchers at the Leiden University Medical Center in the Netherlands had developed a computer programme that analysed Computed Tomographic (CT) scans to see how effective certain treatments were in patients with emphysema.

One of the scientists involved was Dr Berend Stoel, a violinist with a keen interest in the secrets of the Stradivarius.

He adapted his program to work with violins and scanned five of the priceless instruments from Cremona as well as seven modern violins.

They show that while the overall density of the different instruments was similar, the 300-year-old instruments showed evidence of more even growth in the summer and winter. Dr Stoel explained its importance: "If you look at any piece of wood, as long as it's not tropical, you have these year rings.

"The differences between these rings are the density - the wood is more dense during the winter than it is during the faster growing period of the summer. That pattern is influencing the resonating quality of the wood."

The modern violins, according to Dr Stoel, show greater differences in their seasonal growth patterns. The older ones had more even grain, reflecting similar growth periods in winter and summer.

I've always been fascinated by these great instruments. The area of Cremona in Italy has long been renowned for producing perhaps the best stringed instruments in the world, and this research sheds new light on why that may be so. The quality of the wood its craftsmen use has always been a key factor in their work, and to this day they devote a lot of time to finding and buying the best they can get. 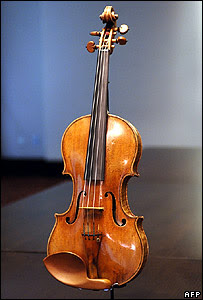 "It's possible that you could use this CT technique to select different types of wood that would be more like the wood that Stradivarius used. But if you are a lousy violin maker and use the best wood, you will still end up with a very bad violin."

The other theory I"ve heard, though it might be a different maker, was that the wood was floated in rafts down the river, and thus spent several weeks soaking before ultimately being sold and used. The fungus and stuff growing in and on the wood changed the characteristics.