Last month, John Birch left a four-star review on Amazon for a tea strainer, which his son had purchased to separate ants for a zoology experiment. No big deal. The review sat quietly on the site until this week, when other scientists found it, shared it and instantly started a Twitter trend.

We lay-folk have long known that scientists use common objects for strange reasons — see NASA researchers sending rubber ducks into a glacier to track ocean currents, or environmental scientists floating tampons down streams to find pollution. But until now, we may not have understood the scope or, frankly, the grossness of the phenomenon.

We present below: #ReviewForScience, an abridged collection.

Let's just say there are worse things you can put through a tea strainer than ants.

Here are a couple of examples of the "reviews".  Click each image to be taken to a larger version on the Twitter page. 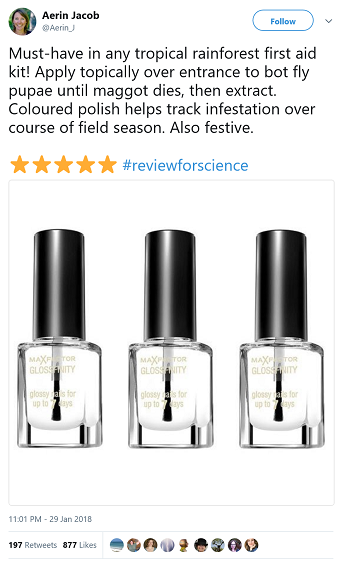 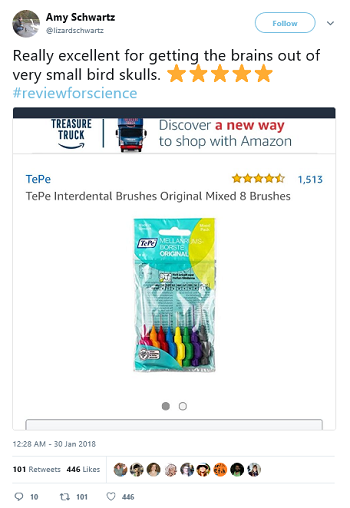 Clearly, scientists have vivid imaginations . . .  So do military men, of course.  Tampons and sanitary pads as wound dressings?  Got you covered.  Stockings as air filters?  BTDT.  Sugar as sabotage tool?  Oh, yeah.

Labels: Boys and their toys, Business and Commerce, Funny, Product Reviews, The Mind Boggles, Useful
Email ThisBlogThis!Share to TwitterShare to FacebookShare to Pinterest

Re. Sugar in gasoline: sugar is not soluable in petroleum products. It is, however, water soluable. Any sugar that goes into solution in petroleum fuels is due to water contamination of the fuels.

I recall reading of an incident during WWII when the retreating Axis forces, in North Africa, left a fuel dump intact, but the fuel had been sabotaged with sugar.
One bright Allied troop knew that sugar was not soluable in gasoline, so he pumped water into a partially full container of gas and then siphoned off the now sugar free fuel and the Allies continued their advance on German gas.

I, also, recall reading of the exploits of a sabotuer behind enemy lines who greased one of the rails of a train track on a curve causing the train to derail (he noted that this technique was Top Secret info). I have never heard/read of this technique being used in any other manual or memoir.
I worked with a SEAL who told me that during the Unpleasantness in South East Asia, he and his team, without authorization (and against orders to not cross the DMZ) derailed a train inside a tunnel in North Vietnam. He smiled and said, "Do you know how hard it is to get a train back on the tracks inside a tunnel?"

Dad's microbiology lab at his university had a box of maxipads in the first aid kit. Only thing that worked if you sliced yourself with a super-sharp scalpel. Didn't believe him till we toured his lab, but yep, there it was (and they were still cleaning the wall from the last time some poor victim 'jack the rippered' himself the previous night.

Proving, once again, if it's stupid but works, it ain't stupid.

Condoms to keep rifle muzzles clean...
Can also be used as an emergency water bottle.

The sanitary napkin thing is backwards. Female nurses in WW 1 found that wound dressings worked excellently for that time of the month and Johnson & Johnson picked up on the idea after the war and started marketing them to women.

Certainly nothing wrong with having an aptitude for being resourceful.

Alton Brown recommends using hose for storing onions - insert them one at a time, and tie knots between each, then hang up the stocking.