Wealth is in the eye of the beholder


There are clearly very different standards of what constitutes "wealth" when it comes to owners and bankers.  In two recent articles, Bloomberg makes the distinction clear.

In the first article, "How Much Money Do You Need to Be Wealthy in America?", those who own the money (or whatever) reveal their standard of measurement.

To be financially comfortable in America today requires an average of $1.4 million, up from $1.2 million a year ago, according to the survey. The net worth needed to be “wealthy”? That’s an average $2.4 million, the same as last year in the online survey of 1,000 Americans between age 21 and 75. 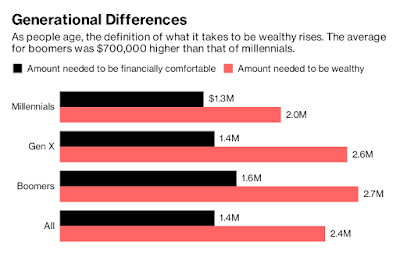 There were some heartening signs amid the numbers. While 18 percent defined wealth as being able to afford anything they desired, 17 percent said it was “loving relationships with family and friends.” That jibes with how Joe Duran, chief executive officer of money manager United Capital, said he likes to think of “wealth.” After building and selling his first company, “I realized that money is nothing more than fuel,” he said. “It is a resource that lets you have choices, but if you don’t think about what you are working for, you will die rich but not live rich.”

Banks, on the other hand, have a very different perspective on wealth.  In a second article, "Here’s How Much Money You Need for Bankers to Think You’re Rich", Bloomberg lays it out.

For most of the planet, $25 million represents unfathomable wealth. For elite private bankers, it buys their basic service.

No private bankers worth their wingtips will say they don’t care about clients with “only” a few million ... But “to get the highest level, companies have raised the bar,” said Brent Beardsley, who leads Boston Consulting Group’s work in asset and wealth management globally.

The measure of what makes someone rich has changed dramatically in the past two decades. In 1994, when Peter Charrington, global head of Citi Private Bank, first joined the firm, “Three million was largely considered ultra-high net worth across the industry,” he recalled. “Fast-forward almost 25 years, and $25 million is how we define ultra-high net worth.”

That’s not to say $25 million opens all doors. Abbot Downing, Wells Fargo’s operation for ultra-high-net-worth families, works with clients who have at least $50 million in investable assets or $100 million in net worth. Ascent Private Capital Management of U.S. Bank sets what Martim de Arantes Oliveira, regional managing director for its San Francisco office, calls a “stake in the sand” at $75 million in net worth for multigenerational wealth.

Well, that makes it simple, doesn't it?  Neither my bank nor I think I'm rich - not even close to it!

At my current rate of wealth accumulation, I should make it to the 2018 standard around the year 2500. Naturally the bar will be raised by then.

I have a loving and lovable wife who for some reason feels the same way about me. We're wealthy regardless of what banksters might think.

We have a healthy new granddaughter — an outcome that was not even close to guaranteed. Wealth beyond the dreams of avarice.

I'm just over 30 years out of college but by means of dedicated savings my retirement accounts are right at $1m today and soon we will pay off the mortgage, leaving a 4 year car note at 0% interest as our only long-term debt. I have no pension in the works so my IRA/401(k) are my only reliable resources, I don't include Social Security payments in my retirement planning.

We live in a 50's scale house and effectively pay cash for everything else, including vacations.

I live in Orange County, CA so if I can do it here you can save for retirement anywhere.

I live in San Jose (one of the highest cost of living places in the country). And I'll point out that "rich" is relative to a least two factors: who you're comparing yourselves to, and the relative cost of goods and services.

A similar survey in the SF Bay area showed that around here people think you need a bit over $4 million to be "rich" - and a sizable percentage voted for $6 million. For perspective, in San Jose the median family income is approximately $105K - which puts them on the 80th percentile nationally.

Yes, a much higher percentage in this area have high incomes. On the other hand, someone earning the median US income in most mid-western or southern cities can usually afford a home, while you need to be earning more than 2x the local median income to afford on here. Other things are expensive here, too. But it's the cost of housing that skews perceptions of wealth so high.

My wife and I are lucky - we bought our house many years ago, when home prices in this area were merely outrageous rather than absolutely insane. But even though our daughters are both professionals with decent incomes, both moved to lower cost of living areas and never expect to move back (daughter #1 and her husband just bought a house in southern California - much bigger and nicer than ours - for about a quarter of the prices in our own neighborhood).

But even with the higher local cost of living, if you factor out the outrageous housing costs (ie: own a paid-off home or have an affordable fixed-rate mortgage) it's quite possible to live a very comfortable life for a fraction of the cost many pay. Because one of the consequences of high local incomes coupled with low expectation of buying a home is that a high percentage of the people spend as if they're rich, even if they have minimal savings. Lots of grasshoppers, very few ants. And in many - most? - cases they're the same ones loudly proclaiming they could never, never, possibly live in some backwards place like . . . most of America.