If they can't take our guns and ammo, they'll make it difficult to buy them


Anti-gun forces are exploring a new avenue of attack against law-abiding buyers of firearms and ammunition.

Banks and credit-card companies are discussing ways to identify purchases of guns in their payment systems, a move that could be a prelude to restricting such transactions, according to people familiar with the talks.

The financial companies have explored creating a new credit-card code for firearms dealers, similar to how they code restaurants or department stores, according to people familiar with the matter. Another idea would require merchants to share information about specific firearm products consumers are buying, some of the people said.

Such data could allow banks to restrict purchases at certain businesses or monitor them.

Even a move to monitor gun purchases would be contentious, highlighting concerns about the use of consumer data and Wall Street’s involvement in a sensitive political area.

How companies use data generated by people’s activities has become a flashpoint in the wake of the controversy about the harvesting of consumers’ personal information and activities at Facebook Inc. by outside companies.

“A bank could say, ‘We’re not going to do business with gun manufacturers,’ ” said Jeremy Stein, a former member of the Federal Reserve Board of governors who currently is an economics professor at Harvard University. “But when it gets into using the information, you’re getting into the same issues Facebook and others had problems with.”

Citigroup, following the Feb. 14 Parkland shooting, adopted a new code of conduct for gun dealers and manufacturers the bank does business with. The code includes firearms retailers restricting sales for buyers under age 21 ... The policy “does not impact the ability of Citi customers to use their credit and debit cards for the legal purchase of firearms,” according to a bank spokesman. He added that the bank “is focused on implementing its firearms policy and not on conversations around identifying gun purchases.”

A spokesman for Bank of America said the bank’s policy is to stop making new loans to manufacturers of certain kinds of assault rifles sold to civilians. He said the bank isn’t involved in discussions about credit cards.

At least one large U.S. bank has had early conversations with lawmakers about potential legislation to require merchants to share information about specific gun-related products consumers are buying with their cards, according to people familiar with the matter.

This is, of course, an attempt to impose anti-gun sentiment on firearm-neutral laws and regulations.  The same people who censor and "no-platform" conservative and right-wing voices on Facebook, Twitter, etc. are more than willing to make it much more difficult for law-abiding firearms purchasers to pursue their legal business activities.  Bank of America is already doing that to certain firearms manufacturers, and as a result has lost any prospect of doing business with me.  Wells Fargo has (so far) resisted similar pressures, to its credit (you should pardon the expression).

The anti-gunners aren't going to give up.  They're "true believers".  They know they're right, with a fervor that's almost messianic.  They won't listen to reason, only to their feelings.  We're going to have to expect more of this from them in future.  Meanwhile, if you want to use your credit card or checking account to buy a gun or guns, or stock up on low-cost ammunition from online vendors, now might be a good time to do so.  I suspect you'll have a lot more trouble doing so in future.  I foresee a lot more guns being bought for cash, or two individuals each buying a gun they know the other wants, then giving it to the other for Christmas, or a birthday, or something like that.  That way, there's no record of who ends up the owner of the thing - and the gift of a firearm is entirely legal in terms of the regulations, provided it's not a regular thing that comes to resemble trading activity.

Ultimately, the only way to stop this sort of nonsense is to educate people - and the anti-gunners want to block every possible avenue for us to do that.  Oh, well . . . if we can't do it for groups of people, we'll have to tackle it one person at a time.  As the USCCA points out: 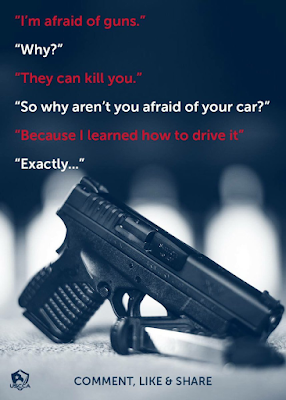 Policies like those are why I'm in the process of moving away from my Citi card (20+yrs of business) and BoA (15yrs of business). I won't close them -- no reason to take the damage on my credit report, but will just toss them into a drawer. Amusingly enough, I now have 3 new credit cards -- seems that my credit score makes financial services people all tingly in the right places.

This may be an "opportunity" for a new bank.
Seems there are a lot of customers out there who's bank no longer wants their business.

Pornography will be completely acceptable. Freedom of speech and all that. Besides, it's for the children.

They already do something similar with on-line herbal sales. There are several botanicals that, while not illegal, are capable of giving a buzz of sorts. Kratom, and kava kava are examples. Credit card companies deny these vendors access. They get around this by requesting a photograph of a signed personal check. I have no idea how the cannabis industry does its banking.

I am light a few calibers but pretty long on some they don't care about. Like Aesop says, you don't have enough for what is coming. But I will give it a good go.

The progressive left tells us that we must have mandatory sex education in grade school.
It's for the safety of the children.
Every time I suggest age appropriate gun handling and safety instruction in public schools I am roundly criticized by those same progressive lefties. How dare I expose innocent children to weapons!
Here's the thing. There are at minimum some 300 million firearms currently in private hands in the US, possibly two to three times than number, but who's counting.
Gun phobic parents can spend their entire lives attempting to ensure that junior never encounters even one of those firearms.
Or with a bit of common sense instruction see that they are protected against a firearm related accident caused by ignorance.
Because with movies, and TV, and video games the children are being inundated with information about guns, it just so happens that it's almost invariably wrong and dangerous.

Privatizing tyranny is effective because while the government might be expressly forbidden from doing something like restricting free speech or banning guns, private businesses are free to do whatever they want. Want to chat up a conservative cause? Fine, just don't expect anyone to hear your words on Facebook or Twitter. They call that hate speech and ban it with the smiling approval of the government.

The left is more effective at this because they are hive-mind collectivists. Someone suggests they all write the Last National Bank to demand they do or not do something and voila, 100,000 emails arrive at the bank CEOs mailbox. The right may be appalled at this ans some of the individualists on the right may protest, but the mail count will be much smaller.

"They can kill you."

"That's ridiculous. Guns are inanimate objects. Fear of inanimate objects is irrational. Psychologists have a name for that. It's called psychosis. So you are demonstrating psychotic behavior."

Hmm, I want to stop doing business with banks that facilitate murder at abortion/women's "health" clinics/family planning clinics...thank I can get them to start tracking those expenditures???