The incredible contempt of the political class for ordinary people


I was infuriated to read a presentation by a senior economist from the Federal Reserve Bank of Chicago.  It was at a seminar titled "Navigating Pension Reform in Illinois: What Lies Ahead?"  We've already taken a hard look at Illinois' self-inflicted financial and pension woes, and how they threaten the economic future of every resident of that state.  Now, to solve them, the presentation proposes to hit those residents even harder.

The title of the presentation is "Can (or Should) a Statewide Property Tax Be Used To Payoff the Unfunded Pension Liability?"  (Link is to an Adobe Acrobat document in .PDF format.)  Here are a couple of key slides used by the speaker.  Click each slide image for a larger view. 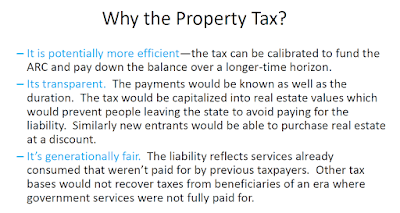 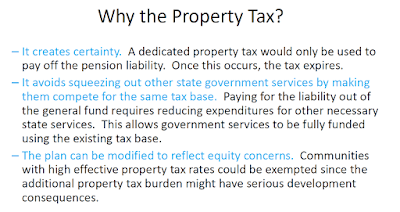 Note the blatant contempt and indifference displayed by the speaker for the average Illinois taxpayer.  A few lowlights:

I can only repeat what I said in the heading of this blog post.  These proposals display nothing so clearly as "The incredible contempt of the political class for ordinary people".  The politicians can and will make whatever promises they think will keep them in power . . . and then they'll make their people - you and I - pay for those promises, by hook or by crook, whether or not we think their promises, and the expenditure needed to make them work, were, or are, or will be, a good idea.

If it were up to me, I'd simply cancel the impossible pension promises and deals, and tell the unions to get real.  However, the politicians rely on those unions to bring out the vote for them - so that isn't about to happen.

The most honest and dangerous words in the whole thing are, "The plan can be modified..."

In 1966 Massachusetts enacted a temporary 3% sales tax. Temporary would likely mean that it would expire. No, temporary meant that they would raise it! They did, twice.

Why do they call it Taxachusetts, I wonder?

Why would anyone move to or stay in Illinois or Mass?

I hope these are extinction bursts.

I protest the comparison with drunken sailors.

After all, drunken sailors only spend their own money, and they stop when they run out.

Peter, I have to rise to defend drunken sailors, and Marines. They are morally far superior to politicians. They spend weeks of months at sea, working like mad. When they get a port call, they drink and raise hell, admittedly. BUT THEY ONLY SPEND THEIR OWN EARNINGS. They don't loot the ship's coffers. If politicians could but emulate drunken sailors....

I was born and raised in downstate Illinois. Most of the state is small town rural, conservative farm communities.
I watched for over thirty years as Chicago, Cook county, and by extension Springfield stole more and ever more of what the citizens had worked so hard to earn. We drove on gravel roads so Chicago could build yet another expressway. We attended school and conducted local government business in trailers and quonset huts so that the hungry leach by the lake could build another marble edifice.
My current home in Alabama runs about $500 per year in property taxes. My last home in Illinois, smaller and with fewer features, ran $5,000 in property tax.
And when I left Illinois in 1984 the income tax was 2.5%. I see that just this past year they raised it to 4.95%.
All reports are saying that people are leaving Illinois in droves, and I find it hard to blame them.

Politicians never learn or appear to notice that, at some point, higher taxes change behavior. Individuals and businesses are leaving California for states like Texas. Seniors retire from NE states to Florida. High income tax and sales tax rates create an underground, cash or barter economy.

The suggestions here for the use of lampposts are well-considered.

Left Illinois for twenty years in the U.S. Marine Corps, then got a job in the swampland of D.C. - - and when I retire in a few years, I'm NOT going back to live in Illinois. Leftist Chicago/Springfield politics and attempting to appease the free cheese crowd (so they won't burn down the cities) has run amok and ruined the state economy.

GE moved their HQ from Connecticut to Massachusetts to lower their tax burden. Which kinda tells you how bad the situation in Connecticut is.

Don't like Chicongo?
This is how you get more Chicongo.

Word to your mother:
How did this brilliant scheme work out for the Sheriff of Nottingham?

Question:
Why was it called the Great Chicago Fire?
Answer:
Because it was Chicago of course.
May be past time for another one. I know a fair number of downstaters who would cheerfully contribute a gallon of gasoline each.

could do as northern californians want--south illinois secede from north illinois and form a new state.

That tax is to pay for the shortfall in revenue for STATE EMPLOYEE PENSIONS--not even for city or county pensions in that State.

So the targets should be the State retirees.

But consider this, Peter: if the pensions cannot be reduced significantly, and nothing is done to increase revenues, and a (D) majority shows up in Congress, YOU WILL BE PAYING THIS BILL. Yes, YOU, over there in Texas. And by the way, you'll be paying the bill for CALIFORNICATE's employees, too.