Next Big Future has an interesting article comparing purchase and operating costs of US Air Force and US Navy combat aircraft.  Among its features was this graphic (click it for a larger view). 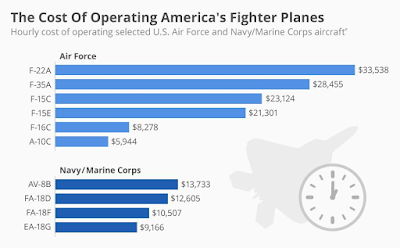 If you do a little basic arithmetic, you find that the cost of buying, say, an F-35 (as cited in the article) will be matched by its operating costs within less than half the aircraft's expected service lifespan - less, if inflation drives up those operating costs (as it almost certainly will).  Therefore, even after the aircraft have been bought, their ever higher operating costs will continue to eat up the defense budget for years to come.

I think the US Navy is taking a very intelligent look at the situation, with its recent decision to upgrade its older Super Hornet aircraft and buy new ones to add to its inventory.  Their purchase price and operating costs are far lower than the latest F-35 models, but the aircraft are almost as capable across the entire spectrum of military operations.  That fleet mix bodes well for future Navy budgets.  However, the USAF has "bet the farm" on stealth, and demands an all-stealth combat fleet at much greater expense.  Can it afford to pay for it?  Can the country afford such a force?  Is it worth its expense, in terms of operational effectiveness?  Only time will tell.

"Can we afford it" was the question, I'm guessing that depends on if it really works or not.

The days of giving someone an M1 and saying have at 'em are long gone. It's the inevitable second order consequence of being risk averse.

I hope that very condensed summary of military strategy makes sense? If not. I'm happy to answer questions. You have my email, write to me.

From the Wiki summary:
In the year 2054, the entire defense budget will purchase just one tactical aircraft. This aircraft will have to be shared by the Air Force and Navy 3½ days each per week except for leap year, when it will be made available to the Marines for the extra day.

He neglected that due to maintenance, it will only be available for a mission two days per week.

The Air Force has always been the most corrupt service in terms of procurement. This is because all of the large defense contractors have traditionally been aerospace companies, with revolving doors for retired military personnel.

The Navy and especially the Army have generally been better at "living within their means" with regards to procurement. However, warship procurement has become way out of control as well in the past 20 years.

procurement has been corrupt at least since the late 50's. Eisenhower talked about this in his last speech prior to leaving office in 1961. This is when he coined the expression "military industrial complex" (MIC).

FYI, F-35 is already up to $37k/hr. And it scales roughly 10% increase in maintenance manhours every two years. E.g. it takes 10 hours to maintain an acft for each hour of flight now, in two years it will take 11 hours, ad infinitum... AND the actual costs per hour will rise based on maintainer salaries, parts costs, etc. I know in the P-3 community we went from $5k/hr to $11k/hr in a little over 10 years, plus the concurrent cost increases... Sigh...

I wonder if that analysis takes fuel usage and cost into consideration. I couldn't see anywhere in the article where it discussed those, and that's kind of an important factor, at least for sustainability, when every aircraft is taking on fuel 1-3 times per mission.

I just finished reading a book called Tanker Pilot (shameless plug, I'll be putting a review on my blog in a week or so) that really showcases just how much gas military aircraft are burning for various missions.

Then think about what it costs to get that gas over to where it needs to be. Seriously, there's a story in Tanker Pilot about using C-17s to fly gas into a forward airfield to fuel up KC-135s too feed strike aircraft over Afghanistan.

They'd have HAD a USAF "stealth" force, if they'd been smart enough to build the whole projected F-22 fleet, and gotten the economic advantages of mass production....

There is a time and place for the F-35's and F-22's. And we should be building both of those and the new FA/18 too.
But, in a majority of the time do the people on the ground need a stealthy aircraft for support?
Or could a T-6 Texan II or a EMB 314 do the job where their operating costs are less than $2,000 per hour?
Even with inflation considered the buying price of a turboprop CAS plane is still less than half of a new FA-18 let alone a F/A-18XT.
And with a turboprop the aircrews (yes there are two place turboprops) could actually put many more hours in the air for a greatly reduced cost per hour of flight.