One of the more dangerous phenomena in aviation is an F-16 pilot whose marksmanship is better than his situational awareness. Two soldiers discovered this on the Utah Test and Training Range one night in April 2007. An F-16 pilot lost sight of his target while rolling into a strafing run using night-vision goggles, acquired their rented GMC Suburban instead, and converted it to Swiss cheese.

Fortunately the victims were both riding in the front seat and the injuries they sustained were the result of exiting the vehicle, which for some reason they decided to do rather quickly. 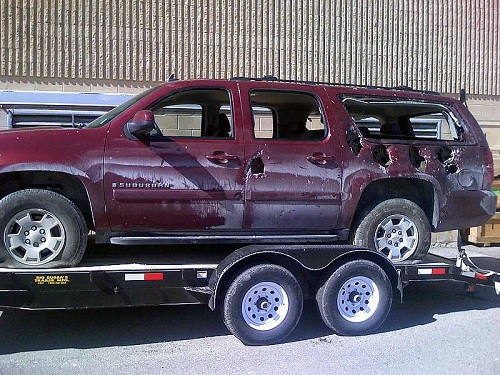 Looking at that vehicle, I'd say speed was warranted! According to the US Naval Safety Center, which headlined its report "Glad It's A Rental #297" (and which must be chuckling up its collective sleeves at its Air Force counterparts' actions):

Seems a pair of soldiers were driving a rented SUV at a test and training range out west one night. Seems an F-16 pilot was getting some target practice at the time. Seems the SUV was in the target area. Seems the pilot was a good shot.

A local spokesman said the soldiers were not hit but suffered minor injuries "while exiting the vehicle in rough terrain." Personally, any minor injuries I suffered while bailing out of a vehicle and running away while being shot at with REALLY big bullets would be a welcome alternative.

The soldiers had been training to identify enemy targets and direct aircraft to fire on them. And to this, all we can say is, “Now you know what it feels like.”

Have you ever seen those little stick-on “bullet hole” decals you can get for your car? This is what the jumbo version would look like. I just wish we had a photo of the expression on the face of the car-rental employee when this one was towed back in.

An Air Force investigation says an F-16 pilot failed "to positively identify the intended target" when he opened fire on a rental SUV occupied by two Fort Lewis soldiers last April at the Utah Test and Training Range.

The soldiers, from the post's 5th Brigade, 2nd Infantry Division, narrowly avoided serious injury. One of the five 20mm rounds the pilot fired into the vehicle hit about a foot behind the driver's side door, said a spokeswoman at Hill Air Force Base.

Hill spokeswoman Lt. Beth Woodward identified the pilot only as a major with the 34th Fighter Squadron who was training for a May deployment to the Middle East. The squadron deployed on schedule but left the pilot at home, she said.

He had over 800 flying hours at the time of the mishap and was rated as current in his training and qualified to fly the mission.

The pilot was grounded during the investigation. As a result of the findings, he now must fly at the direction of a wingman and "additional classroom, simulator and flight training is required to ensure the individual is qualified for wing missions," the 388th Fighter Wing said in a news release announcing the results of the investigation.


Embarrassing for the Major, to say the least. I wonder how long he'll take to live this one down?

As for the occupants of the truck, you can read their account here.

Holy Shit! That's all I can say!

His crew chief had better have stencilled an SUV silhouette on the Good Major's aircraft!

I saw this somewhere else. That site claimed that the two in the SUV were advance spotters for the aircraft. This suggests that they might have contributed to the identification error.

If either of these guys write like Ambulance Driver, I'd love to read their description of the events. :-)

It would seem the rounds were target practice, rather than the high explosive-incendiary or armour-piercing incendiary service rounds, otherwise those two would probably would be dead now. I say probably rather than certainly because both need to hit something reasonably hard to detonate, and I don't know if an SUV like that would count. I mean, aside from a hit to the engine or the driveline parts.

Kind of a gap in the spacing of the hits. Looks like at least two of the 20mm shells went through the window of the middle row instead of punching holes in the sheetmetal. Damn good thing it was only two guys in the truck...