A cross between a UAV and a missile?


I'm intrigued to read about a new Israeli weapon, that combines the features of an unmanned aerial vehicle, able to stay in the air for hours and monitor what's going on, with those of a missile - able to dive on a target and destroy it.

Such weapons aren't new, of course: the original Israeli Harpy (shown below) was developed in the 1980's, and proved very successful in taking out Syrian air defenses and other targets in Lebanon. It's been sold to a number of nations since then. 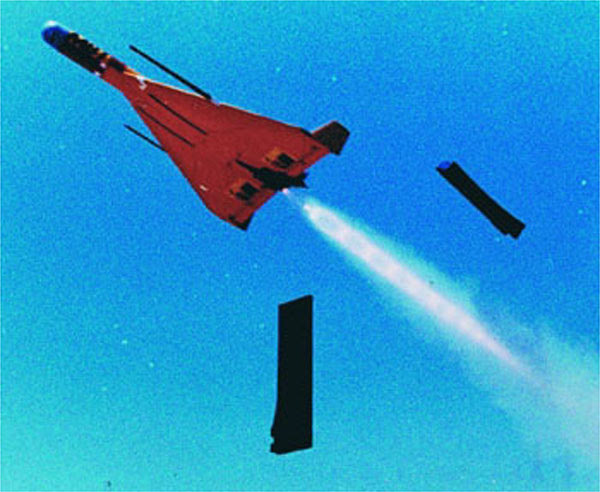 The new Harpy 2, also known as the Harop, seems to have longer endurance and range, and greater accuracy on target. According to Aviation Week:

Tucked into a corner of a presentation by Israel Aerospace Industries marketing vice-president Yair Ramati, at Aero-India's pre-show seminar, was an image of the company's newest lethal UAV (or loitering missile), the Harop or Harpy-2. Turkey reportedly placed the launch order for Harop in 2005 and the system is on offer to India.

In overall layout, Harop resembles a Harpy with outer wing extensions, a longer nose and a canard foreplane. Like Harpy, it is launched from a vehicle-mounted container, but it has an electro-optical seeker in addition to its anti-radar homing system. This allows an operator to identify and hit moving targets, or to attack a shut-down radar.

Ramati predicts a surging market for UAVs, increasing from $4 billion in sales in 2008 to $10 billion in 2020 - a $55 billion total market, dominated by UAVs in the Predator/Heron class and larger because those aircraft can carry multiple sensors. But, he warned, defense budgets will not grow anything like that fast - so that growth will be at the expense of manned aircraft.

Here's a video of Harop in action. Note the suicidal dive on target at the end - although this test vehicle was clearly not fitted with an explosive warhead. When it carries one, the results should be even more spectacular.

Hmmm. I don't think I'd want to be on that target boat. It the UAV was a bit off, it could have hit the fantail of the boat instead of the target over the wake.

The joy of a powered projectile, a pure-pursuit terminal approach, rather than having to fuss around leading the
poor sucker who made himself a target.

They demonstrate a high level of confidence in the weapon by using a manned ship with the target mounted on it.