The surprising complexity of snowflakes


I'm intrigued by a Reuters report.

The random, symmetrical beauty of snowflakes has been recreated in a computer program, U.S. researchers said on Tuesday. 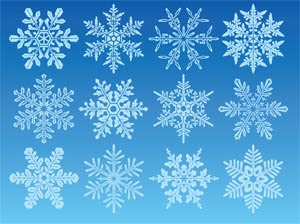 "Even though we've artfully stripped down the model over several years so that it's as simple and efficient as possible, it still takes us a day to grow one of these things," Wisconsin researcher David Griffeath said in a statement.

In nature, snowflakes form from water molecules crystallizing around a speck of dust or other material. The result is intricate fern-like stars, needles and prisms, often adorned by tiny ridges and circular markings.

The model may help meteorologists predict how snowflake types affect the amount of water that reaches the ground.

"Water is the most amazing molecule in the universe, pure and simple," Griffeath said. "It's just three little atoms, but its physics and chemistry are unbelievable."

Coming from a country (South Africa) that doesn't experience snow except high on the mountains, except for freak conditions, and living in Louisiana, where it's very rare indeed, I'd never paid much attention to snow. I investigated further, and found the SnowCrystals.com Web site, hosted by CalTech. It contains a lot of useful information, as well as some fascinating image galleries of snowflakes under a microscope. Very interesting reading.

To think that different snowflake shapes or patterns may actually affect how much water reaches the ground! Fascinating. I must learn more about this.