Of fishes, crocodiles and owls


Three animal stories caught my eye in today's news. I thought you might enjoy them too.

First is a report of a deep-sea fish that can see through its own transparent head!

This amazing barreleye fish really does have eyes in the back of his head.

Accustomed to living in the pitch-black of the deep sea, the animal has developed this unique and incredibly useful ability to spot predators trying to sneak up on it, as well as potential food.

The discovery came when the fish was filmed by marine biologists trying to solve the 50-year-old mystery of how it uses its eyes.

For years scientists believed its eyes were fixed and it only provided a view of what was directly above its head.

However it now emerges that over time the Macropinna microstoma has evolved so its eyes are able to look out in different directions from within a transparent shield.

While its body is mostly dark, the top part of its head is transparent, and its eyes are clearly visible. 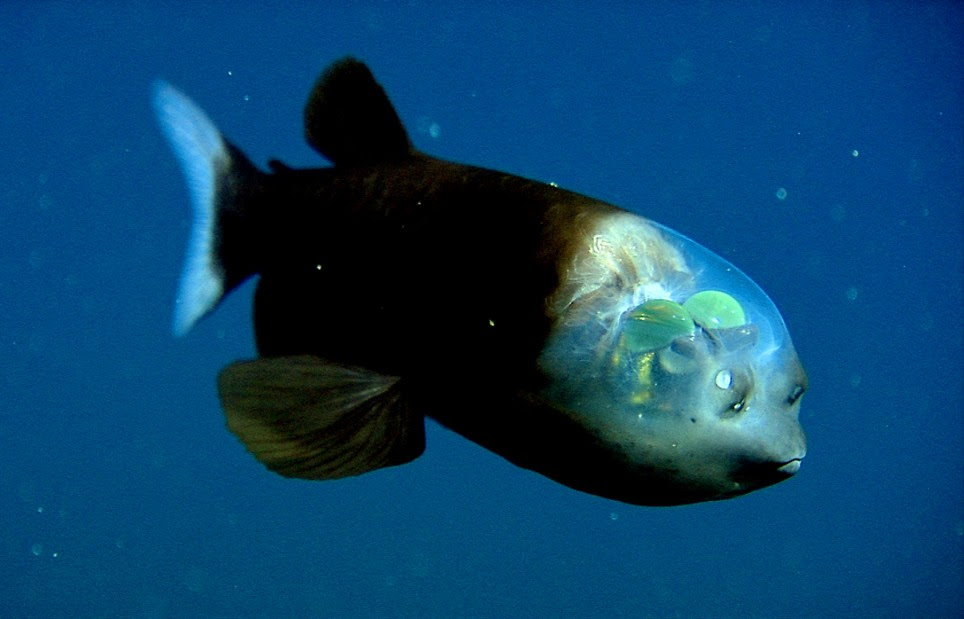 According to evolutionary biologists, it developed such a powerful sense of sight as a result of the harsh environment it lives in.

The fish, which is only a few inches long, lives at great depths just below the line at which sunlight can penetrate the water. The marine biologists also found that it uses its large, flat fins to remain motionless in the water.

This means that creatures around it cannot see it clearly. Predators lurking above it cannot spot it either, however it can look upwards to hunt for the small fish and plankton it lives off.

When a suitable morsel is identified, the barrelfish attacks out of the darkness and swiftly engulfs its prey.

To avoid looking at the sun when it moves into shallower waters, the creature's eyes can rotate to look forward so it can see where it is swimming.

Its amazing eyes glow a bright-green and researchers believe it may have developed a form of light filter which allows it to ignore the sunlight and spot the bioluminescence of small fish and jellyfish - it's favourite food.

The two holes which look like eyes on the front of the fish are in fact nales, olfactory organs similar to human nostrils.

The barrelfish has a crystal-clear liquid over its eyes, held in place by a tiny membrane.

If that was to break, its eyes would become exposed to the sea and the pressure that exists at its natural depths of between 2,000ft and 2,600ft would instantly kill it.

Fascinating! What more wonderful creatures remain to be discovered, deep in our oceans?

Florida wildlife managers have launched an experiment to see if they can keep crocodiles from returning to residential neighborhoods by temporarily taping magnets to their heads to disrupt their "homing" ability.

Researchers at Mexico's Crocodile Museum in Chiapas reported in a biology newsletter they had some success with the method, using it to permanently relocate 20 of the reptiles since 2004.

"We said, 'Hey, we might as well give this a try," Lindsey Hord, the Florida Fish and Wildlife Conservation Commission's crocodile response coordinator, said on Tuesday.

Crocodiles are notoriously territorial and when biologists move them from urban areas to new homes in the wild, they often go right back to the place where they were captured, traveling up to 10 miles a week to get there.

Scientists believe they rely in part on the Earth's magnetic fields to navigate, and that taping magnets to both sides of their heads disorients them.

"They're just taped on temporarily," Hord said. "We just put the magnets on when they're captured and since they don't know where we take them, they're lost. The hope would be that they stay where we take them to."

Hord and his co-workers have tried it on two crocodiles since launching the experiment in January, affixing "a common old laboratory magnet" to both sides of the animals' heads. One got run over by a car and died, but the other has yet to return, Hord said.

"This one is by no means a really well-developed scientific study with a control group. It's just something we thought we would try," Hord said. "We do have to make some room to live with them."

Interesting, if it works. However, I have one question. What happens if a magnet-wearing alligator swims too close to another one, similarly equipped? Will they instantly lock together like lovers, under the influence of magnetic attraction? Will this lead to all sorts of complications in crocodile society, including accusations of having an unnatural attraction to others?

The third report is bound to delight those who are soppy about animals from time to time (including yours truly).

In his five short weeks of life, Orbit hasn't met many other owls.

So he isn't at all worried that his new best friend doesn't hoot back.

The orphaned chick is perfectly content in the company of the stuffed bird perched next to him and is never far from his side. 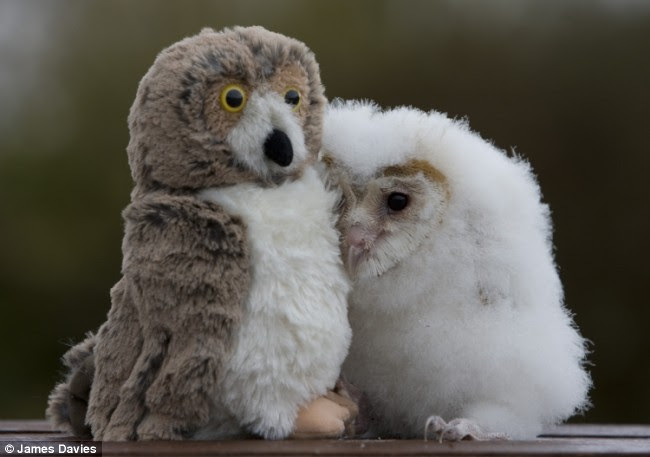 Orbit, a common barn owl, was given the toy by Lyndsey Wood, his carer at Folly Farm, near Narberth in West Wales.

She said: 'A friend suggested that I find something like a toy owl to stop Orbit feeling lonely.

'I thought he might try to eat it, but he just cuddles up to it and goes to sleep.'

To me that's less heartwarming and more reminiscent of the Harlow experiments.

Of course, owls are also a LOT stupider than monkeys, so who knows.

If that was to break, its eyes would become exposed to the sea and the pressure that exists at its natural depths of between 2,000ft and 2,600ft would instantly kill it.

I don't think so. It's not as if the interior of the fish is at sea-level pressure, is it?

Only a significant pressure DIFFERENCE would kill it, and the whole beastie is at the same pressure as its surroundings.

Tyto Alba, the common Barn Owl. One of my favorite birds. We have them in an abandoned Deer stand up at Clarksville. Hope to see the hatchlings before long.

I suspect your story about animal relocation may be a croc.

Just another case of animal magnetism at work... ;)