Today's Doofus award is a collective one, to Ireland's Garda, or police force. According to the Irish Times:

HE WAS one of Ireland’s most reckless drivers, a serial offender who crossed the country wantonly piling up dozens of speeding fines and parking tickets while somehow managing to elude the law. 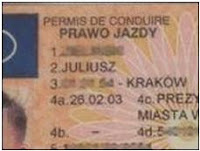 So effective was his modus operandi of giving a different address each time he was caught that by June 2007 there were more than 50 separate entries under his name, Prawo Jazdy, in the Garda Pulse system. And still not a single conviction.

In the end, the vital clue to his identity lay not with Interpol or the fingerprint database but in the pages of a Polish-English dictionary. Prawo jazdy means driving licence.

In a letter dated June 17th, 2007, an officer from the Garda traffic division wrote that it had come to his attention that members inspecting Polish driving licences were noting Prawo Jazdy as the licence holder’s name.

“Prawo Jazdy is actually the Polish for driving licence and not the first and surname on the licence,” he wrote.

“Having noticed this I decided to check on Pulse and see how many members have made this mistake. It is quiet [sic] embarrassing to see that the system has created Prawo Jazdy as a person with over 50 identities."

Do I hear a collective "Oops!" from Ireland? And I'd love to know whether Polish police have made a similar mistake with visiting Irish motorists!

I bet the Pollocks are telling Irish jokes now.

This is Poland's revenge for all those jokes.