Fun in the snow


The 2009 US National Tobogganing Championships were held in Maine a couple of weeks ago. The Bangor Daily News reports as follows:

Some craved glory. Others had a smaller, more heartfelt goal.

“We’re hoping just to make it out alive,” said Carmen Felix of Camden, clad in a nun’s habit and waiting for the four-person toboggan races to start.

“Amen to that, sister!” said Pam Moyer of South Thomaston, who wore a giant cross around her neck. Both women were on the Holy Smokes team.

About 370 toboggan-racing teams from as far away as California — and with names such as Lil’ Deuce Moose and the Beer Coasters — participated in the two-day affair. The races bring thousands of people to the ski mountain and have become an economic engine of the area’s winter economy. 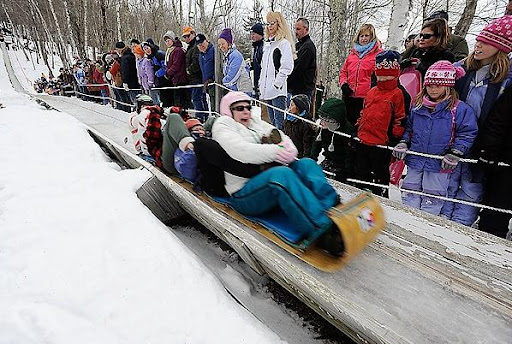 “We thought it would be successful just because it’s weird,” said event founder Ken Bailey, who was announcing the races. “Also, there’s the fact that anybody can become a national champion. All you need is a toboggan and some luck.”

While riders on the speediest sled of the two-day event are legitimately dubbed the new national champions, silliness seemed even more important than speed in the carnival-like atmosphere surrounding the toboggan run.

Alicia McKenney’s eyes looked steely under her chicken hat. When she moved, a cloud of yellow feathers drifted off her costume to settle in the snow around her feet.

“We want to win for the best costume,” McKenney said. “I want one of those trophies bad.”

Her team, Peace Be The Journey, almost never made it up to the Snow Bowl. McKenney said that she had ordered a toboggan from L.L. Bean, but the company sent her a wooden chair in the mail instead. When she called to have the mistake fixed, the Freeport mail-order giant said it was sold out of toboggans until next fall.

But McKenney was undaunted. She posted an all-points bulletin for a toboggan on the Internet classified ad service Craigslist and hit pay dirt when a Warren man responded. He was a die-hard competitor in the U.S. Nationals but was laid low by surgery this year and couldn’t participate. So he decided to lend his handmade toboggan to the chickens from southern Maine.

The team members had never even made a practice run together, but they had the costumes, they had the toboggan and said they were ready.

“We’re virgin chickens — this is the real deal,” McKenney said. “You’ll probably hear us squawking.” As the races began, Bailey cheerfully kept the onlookers in the loop.

“Do you notice the panicked look on their faces when they’re going by?” he called out over the loudspeaker as one team careened by. “They’re having fun!” 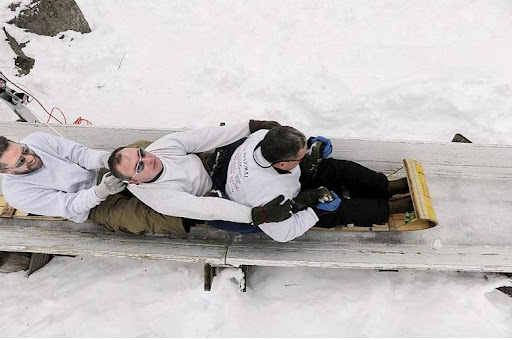 More at the link. Certainly, the wacky, off-beat nature of the Championships appears perennial, as this video of the 2008 event shows clearly. Love the comments about preparations!

The Championships' origins date back to 1936, according to Wikipedia. The 400-foot chute has been rebuilt several times. Here's what it looks like from a tobogganist's point of view.

And here it is from the spectators' angle.

Looks like a lot of fun was had by all.