I've been watching the development of shear-thickening fluids (also called 'dilatants' or 'non-Newtonian fluids') with great interest. They promise to revolutionize things like body armor and vehicle traction control.

Now, an article in the Daily Mail suggests that the British Army is about to deploy the first application of this technology on active service.

On the face of it a layer of orange jelly may not sound the best way to protect a soldier's head from high velocity bullets and shrapnel.

But the British Army's standard-issue combat helmet is set to be upgraded with a liner made from gooey miracle gel, which responds to a sudden impact by locking instantly into a solid form - absorbing huge amounts of energy harmlessly.

A UK-based technology company was today celebrating a £100,000 contract from the Ministry of Defence to develop its D3O shock-absorbing gel to help save the lives of British troops fighting on the frontline in Afghanistan.

The advanced nano-technology of the D3O shock-absorbing gel relies on the bizarre properties shown by 'intelligent molecules' under extreme pressure. 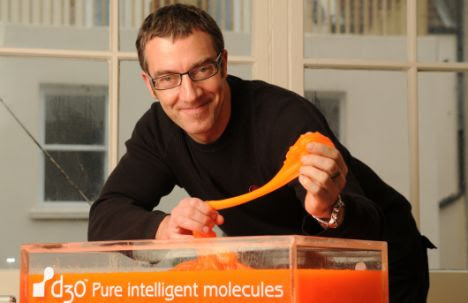 It is already in use in a range of sports and ski wear featuring flexible knee pads or soft hats which instantly stiffen into protective layers when a skier or snowboarder hits the ground hard.

Now the same technology is destined for use in war zones.

Ultimately the army's existing bulky helmets and heavy, restrictive body armour could be slimmed down thanks to the addition of pockets and layers of jelly.

The Army's existing Mark 6A combat helmet has been in service for 20 years, and consists of a tough ballistic nylon layer with padded lining inside.

Now the aim is to produce a new liner made from the miracle gel, which will absorb much of the energy of an impact from a bullet - reducing the chances of it penetrating the outer layer and softening the shock to a soldier's skull and neck.

The gel's inventor Richard Palmer, chief executive of D3O Lab, said: 'It's rather like comparing RoboCop and Spider-Man.

'RoboCop is the past - heavily protected but bulky and cumbersome - whereas Spider-Man is more nimble, covert and flexible.

'The gel works at a molecular level. When moved slowly the molecules will slip past each other, but in a high-energy impact they will snag and lock together, becoming solid, and in doing so they absorb energy.'

For those who've never seen shear-thickening fluids in action, here are two videos. The first is a TV demonstration of a tank full of a cornstarch-and-water solution, which turns solid under a hard impact, but remains fluid under normal pressure. You'll see people run across it safely, but sink into it if they stand still.

The second is a demonstration of US experiments to apply shear-thickening fluids to body armor. I'm sure the US armed forces are at least as advanced as Britain in their testing of this stuff.

With that said, it's definitely a step forward.