A contrast in capabilities - and costs


I'm intrigued to think about the growing dichotomy between big, expensive Navy ships, and small, relatively inexpensive ones that can only perform a small part of the big vessels' missions - but at a much lower cost, both in capital investment and in operation.  It's something that all navies are going to have to face in future, and the US Navy is no exception.  At the moment the 'battle fleet' (aircraft carriers, cruisers, destroyers and submarines) is projected to absorb over three-quarters of the service's shipbuilding budget, with no more than an eighth going to amphibious assault and related needs.

This latter area is where the dichotomy is particularly apparent right now. The US Navy's latest amphibious assault ship, the USS America (shown below), the first ship of her class, is currently undergoing builder's trials prior to delivery. 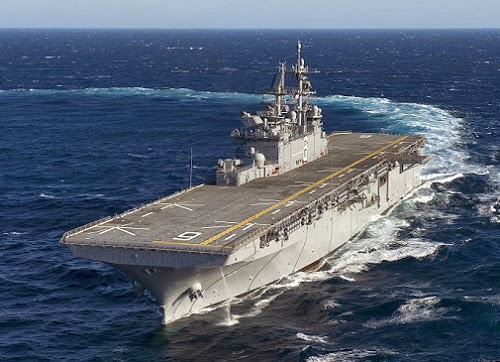 She's huge (44,000 tons, almost the same as the three big Midway class aircraft carriers of late World War II design or the original standard displacement of the Iowa class battleships, and 50% heavier than the smaller Essex class aircraft carriers of that war) and very expensive (the unit cost of her class is intended to be - but will probably exceed - US $3.4 billion).  She can accommodate a crew of over 1,000, plus about 1,700 Marines under normal operating conditions, as well as most of the types of aircraft operated by the US Marine Corps.

Contrast this with the first of ten Spearhead class 'Joint High Speed Vessels' or JHSV's.  Their program cost as originally estimated was approximately US $180 million each, although cost overruns on the first couple of vessels may push this to around $200 million apiece.  They aren't warships, but will be operated by the Navy's Military Sealift Command with civilian crews.  USNS Spearhead (shown below) was accepted into service by the US Navy in December 2012. 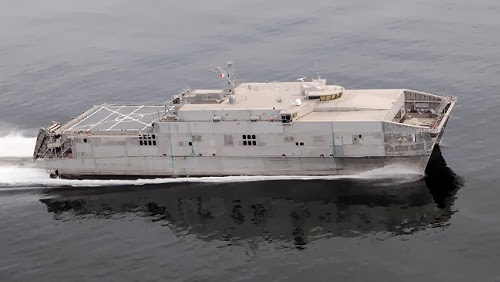 She's just over 1,500 tons displacement, and can accommodate up to 41 crew (although only 22 will be needed under normal service conditions). She can carry 150 passengers in sleeping accommodation and a further 312 in airline-type seats. Her cargo deck can accommodate up to 635 tons of freight, moving it at an average speed of about 35 knots over short to medium distances.

You might think there's no comparison between the two classes of ship.  One's a major warship by anyone's standards, bigger than almost every aircraft carrier in the world except the US Navy's nuclear behemoths and the Russian Kuznetzov class ships, of which one is in service in Russia and one in China.  The other is a glorified inter-island ferry (70% of the design of the Spearhead class is based on the Hawaii Superferry vessels, withdrawn from service in 2009 and now operated by the US Navy as the USNS Guam and the USNS Puerto Rico).

However, the small JHSV's are likely to be far more useful to the US Marines on a day-to-day basis than the much larger amphibious assault ship.  Consider what extended tests using chartered ferries of similar design have already achieved.  Global Security reported some years ago:

As of 2004 there were four (4) vessels under lease by the Army, Navy and Marine Corps in support of experimentation. They are the HSV-2 Swift (USMC/USN), TSV-1X Spearhead (US Army), HSV-X1 Joint Venture (USN), and WestPac Express (USMC).

The Theater Support Vessel (TSV) gives the theater Commander a high-speed, intra-theater sealift capability to support all theater engagement requirements within his Area of Responsibility (AOR). The TSV will provide the capability to operationally move and maneuver combat ready unit sets from staging sites into the forward areas, and to provide follow-on sustainment, through degraded and minor ports. The TSV will carry 600 short tons of cargo, go 40+ knots and have a fully loaded range of 4,500 nautical miles. The vessel can perform trans-oceanic crossings totally unreplenished. This technology will transform the Objective Force by providing the capability to rapidly re-position the Interim Brigade Combat Team (IBCT) up to 400 nm (equivalent to 245 C-17 sorties).

Capabilities to be tested include speed, high payload fraction, longer and more useful ranges and the ability to tailor the payload for optimum mission success. The joint-service experiment is being coordinated by the Navy Warfare Development Command in close partnership with elements of the Army, Navy, Marine Corps and Coast Guard.


There's more at the link.  In addition to the four vessels named above, the experimental Sea Fighter catamaran was built as a technology testbed for the US Navy's Littoral Combat Ship program, and is being considered for further development as a small, fast combat vessel in its own right.

It was the success of these experiments that led to orders being placed for ten of the new Spearhead class JHSV's. For example, the Westpac Express demonstrated great versatility and cost-effectiveness in ferrying US Marines around parts of the Pacific.

Capable of sustaining fully loaded speeds of 36 knots, Westpac Express can rapidly deploy a complete battalion of up to 970 Marines and 663 tons of vehicles and equipment in a single lift, saving both time and money. Whereas the normal transit from Okinawa to South Korea aboard ferry or amphibious shipping would take two to three days, and moving a Marine infantry battalion by air would take fourteen to seventeen C-17 aircraft lifts, the same deployment could be carried out by WestPac Express in 24-30 hours, at approximately 25% of the cost of the airlift option and with far less inconvenience to Okinawa’s civilian population.

As these small, fast multi-hull ships enter service in greater numbers, I'm willing to bet that they'll prove themselves capable of much more than operational planners have yet realized.  When one considers that the US Navy could purchase a fleet of no less than 17-18 JHSV's for the price of a single America class amphibious assault ship, one has to ask:  what's the relative utility of each option for the everyday needs and operations of the US Navy and the US Marines?  I'm not saying we have to scrap all amphibious assault ships;  but we certainly can't afford many of them in today's budget-constrained world.  Cost-effectiveness is likely to be an increasingly important consideration in future orders, and I'm not sure that a large number of the smaller vessels won't prove a lot more cost-effective than a single 'white elephant' amphibious assault ship that may never make an amphibious assault in its life.  Weapons such as massed shore- and aircraft-launched anti-ship missiles make amphibious assaults a much less inviting (and less survivable) proposition.

The same applies to other major and minor warships.  Consider, for example, the Littoral Combat Ship (LCS).  It carries very few weapons, is built to civilian rather than military construction standards, is plagued with problems, and if built in the numbers originally planned, may cost up to $700 million per ship - double the initial cost projection.  You can read about its shortcomings and limitations here.  However, the already-successful JHSV design could be adapted to carry the same mission modules as the LCS, as well as missile armament and sensors to render it at least as capable of defending itself (if not more so).  It's likely that two fully-equipped JHSV's could be bought for less (perhaps much less) than the cost of a single LCS.  Which option would be more cost-effective and operationally effective?  I know where I'd put my money . . .

I love how the government and military call weapon's systems that cannot engage in combat (because they are to expensive to actually use) "successful". It is a word that has come to mean "didn't blow up, sink, crash, burn or misfire YET.---Ray

Something that's been bugging me about every article being negative about the LCS.

There are two classes of LCS, and they never tell me if the problems are with one or both classes.

@Angus: See this article for an overall view:

Personally, I think LCS is a nightmare. They're nowhere near as capable warships as the frigates they're going to replace, and (presently) not as effective at mine clearance as the minesweepers and minehunters they're also going to replace. I think they'll prove to be deathtraps in a war zone.

The US Navy's first and primary mission is control of the sea. It is a three dimensional battlespace - on the surface, above the surface (air), and below the surface. For that you need primary combat warships - aircraft carriers, surface combatants, and submarines.

The US Navy's second mission is projection of power ashore. One component of that is the Navy's amphibious assault force - including the US Marine corps. (Because you really don't have control of land space without boots on the ground.)

Right now, the Navy is capable of throwing prodigious amounts of ordinance and troops ashore. But the US hasn't done a major amphibious assault into hostile territory since Inchon during the Korean War. And at that time we had complete control of the sea and the air above it.

A lot has changed in the past 60 years. And because of the cost, lead time, and build time of warships, the Navy high command must balance a lot of priorities with a limited budget. Should they concentrate on larger, more capable warships, or smaller, less expensive but needed in greater numbers, auxiliary transports? A shortage of either when TSHTF, can not only cost lives, it could cost the war.

The question, which I think you bring up rather nicely, is which type of vessel is the most capable, the most survivable under combat conditions, and, of course, the most cost effective.

I don't think we will know the certain answer to that question until we find ourselves engaged in another war against a nearly equal adversary.

It might turn out that the amphibious assault itself has gone the way of horse cavalry and neither ship is really needed.

Then again maybe not.

My brother was on a Anti-submarine destroyer in, oh, about 1970. During war games, US subs would get in, sink the carrier, and be gone without the escorts ever detecting them.

If we ever go to war with a nation that has subs, assume their subs are as good as what the US had in the 70's. If they're diesel-electrics they're quieter than nukes when they run on batteries. Yes, our escorts are also better...but my money would be on the subs.

Not good thoughts for going up against nations where we'd need the full might of the Navy, such as China...or maybe N. Korea...

And Lord forbid we'd ever have to go up against the Russians. Yeah, their navy isn't what it once was. But I bet they still have some good boat drivers.

So...my money is on smaller and more diverse. Problem is the Pentagon would make it smaller, more diverse and WAY more expensive.