The latest on Maxwell Volume 3


I've now had responses from about a third of those who volunteered their services as beta readers for Maxwell Volume 3. This isn't as many as I'd have liked, but it's still better than I had for volumes 1 and 2; and I'm pleased to see that the comments echo each other to a considerable extent, demonstrating that there's concensus among the reviewers.

The good news is that everyone's picked out points that they like. Some have identified more than others, but the consensus seems to be that the book is much better overall, in terms of plot and development, than the first two.

The bad news (from my perspective) is that some of the problems readers identified with the first two books in the series are still there.  Steve Maxwell is still too much of a 'golden boy', and doesn't have enough in the way of challenges to overcome. Yes, his character is more developed than in the first two books, but he's not developed enough. I need to give a lot more attention to this, and to the use of conflict and tension in the unfolding plot.

It's really important to me not to put out books in too much of a hurry.  I don't simply want to make a fast buck or two:  I want to build long-term success as a writer.  That means I have to put in the hard work 'up front' to make sure that every book is better than its predecessors. As a result, I've decided to delay Maxwell Volume 3 until mid-January 2014. The extra six weeks will give me time to thoroughly re-work certain sections of the book, and improve the areas identified as weak or needing improvement by my beta readers. I won't have it out for the Christmas shopping season, but that's less important to me than making this book the best I can possibly produce at this stage of my writing development.

Thanks to everyone who helped with reviews and input. I value your contributions very greatly. You've already helped by identifying areas that need attention;  and when I've addressed them, you'll have helped to make Maxwell Volume 3 a much better book overall.

As a teaser, here's the preliminary cover image that Oleg whomped up from a graphic that Miss D. and I gave him. It's still a work in progress, but this will give you a taste of it. 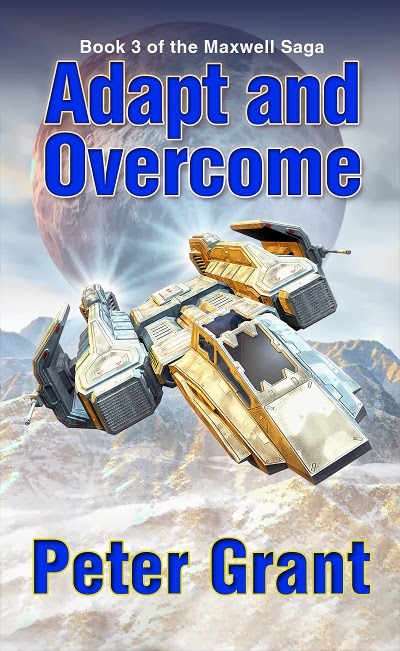 Keep your fingers crossed for me as I settle down to the hard work of re-shaping and improving the book.

Labels: Books, Me me me, Reviews, Thank You, Useful, Writing
Email ThisBlogThis!Share to TwitterShare to FacebookShare to Pinterest

Once read that every good main character should have at least two drives or psychological characteristics that are mutually contradictory, thus giving them an internal conflict to overcome (or not) through their experiences in the story. This would seem to be especially important in cases where the main character has to hold up much of the narrative by themselves.

Haven't had a chance to read your works yet, so there's no way for me to know how relevant that is, but I hope it helps :D

Also, according to the Blogger captcha system, there is a worryingly high probability of my being an artificial intelligence.

I am looking forward to buying Adapt and Overcome when you feel it is ready.

I thought you had plenty of beta readers already, or I'd have volunteered.

Sorry to hear not all beta readers followed through. But...now you know who you can count on for the later installments.

I think you made the right decision. I look forward to reading the finished work!

Thanks for taking the extra time. I like the first 2 and will be getting this one as well.

Like others I am awaiting the next episode with excitement. Please continue to expand this story!