Thank you very much to everyone who responded to my earlier request for advice about replacement computer systems, either in Comments here or by e-mail.  I appreciate your help.

I followed all the links you provided, and compared all the systems you recommended.  Most of them were reasonably attractive deals, but if I were to go with a laptop system, most had one or more limitations - display resolution, or memory size, or processor, or whatever.  It began to look increasingly as if my idea to spend as little as possible, buy a less capable system, and replace it again after two to three years, was probably the most cost-effective solution.

However, a number of you suggested that I consider a desktop system, as portability was a now-and-then requirement rather than an everyday thing.  Others suggested an external monitor for a laptop computer, which would effectively treat it as a desktop system.  (I already use such a monitor, BTW, but it's older technology, unable to handle 1080p resolution or even true 720p.)  I looked at some of the alternatives out there, and began to think hard about this option - particularly as it turned out I can upgrade the RAM on my present notebook to 8GB (its maximum capacity) and replace the defective hard disk drive with an equivalent unit for a combined total of under $100.  If I upgrade to a 250GB SSD, total costs will rise to about $200, but the overall system speed will probably go up by a factor of two or three.  That'll make it a longer-term viable solution for on-the-road needs and a backup to my desktop system.

I accordingly started to price desktop systems.  I'd built more than a few of them in past years, so I understood them well (I started in computers - as a mainframe operator - in the mid-1970's, and can remember using the first generation of IBM PC with its green monochrome monitor, one single-sided floppy disk drive and a whopping 64KB - yes, that's kilobytes! - of RAM).  Shopping around on sites like Newegg and Amazon, I priced components to build a very capable modern system, to get an idea of what a high-end desktop computer would cost if I built it myself;  then I began looking at offerings from computer vendors and retailers.

Miss D. came up with the solution.  She e-mailed me a list of Costco's current computer deals, among which were three absolutely outstanding packages - priced so low I couldn't build them myself for even 10%-25% more than Costco's price.  The three were:


If I'd needed Microsoft Office, the laptop would have represented an extraordinarily good deal;  but I already have that software, so its inclusion in the bundle made it less economical overall.  The Dell desktop was tempting, but faded in comparison to the HP desktop package, which is absolutely stuffed with everything to make it a thoroughly competent and capable system.  It has the latest-generation Intel quad-core CPU, a full 32GB of memory, a fast video processor with 4GB of dedicated memory, a 23" LCD backlit monitor, and all the other bells and whistles.  I couldn't build a comparable system using quality components for less than about $1,200 (excluding shipping costs for the components and sales tax), so Costco's price was very attractive indeed.  That's what I eventually chose.  It was simply too good a deal to turn down, even though it was more than I initially wanted to spend.  I'll call it a Christmas present to myself. 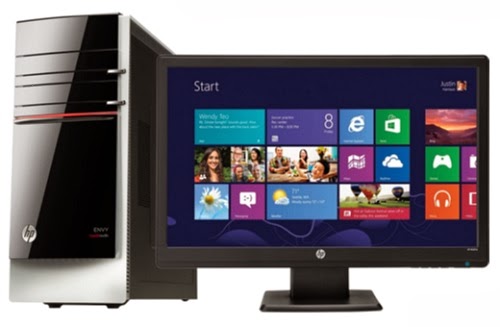 My new system should be here in about three weeks.  When it arrives, I'll order a replacement hard disk drive or SSD and more memory to upgrade my laptop, and do a full re-installation of the operating system and software while I'm at it.  (A number of you have recommended that I look at Linux for the laptop. I'll read more about that while I'm waiting, to see whether it's a worthwhile option for me.)  I already have a decent-sized UPS for the desktop system, and I'll replace its batteries with new ones while I'm waiting.

Thanks to everyone who responded, for all your suggestions.  I'll let you know how the new box performs when I've got it up and running.  It's going to be a quantum leap in performance compared to my present system, that's for sure!

Labels: Boys and their toys, Computers, Interesting facts, Technology, Thank You, Useful
Email ThisBlogThis!Share to TwitterShare to FacebookShare to Pinterest

I've used Linux in various iterations for nigh on 20 years and still do, both at work and at home, and it's very capable. however if MS Office is your required application that rules Linux out.

@Liam: Not necessarily - there are Windows emulators (e.g. WINE) that run under Linux. Alternatively, I can install a dual-boot system, selecting which operating system to use on startup.

Good choice! I hope that serves you well for many years