The economy: need any more evidence?


I've been writing for years (along with many, many others) about the slow-motion economic collapse in which we find ourselves.  (My latest article about it, from earlier this month, may be found here, and is an accurate summary of the present situation, IMHO.)

The quarterly results and economic forecasts from some of America's most important companies are grim evidence that what I described in that article is, indeed, reality.  Consider these articles:


When such problems are reported across the board, what does that say about the US economy?  That's right . . . nothing good at all.

Furthermore, consider the so-called 'Caterpillar indicator'.  As Robert C. Auer put it in a 2010 report:

Like a caterpillar, the economy must crawl before it can fly. And as indicated by Caterpillar the corporation, "you've got to move dirt before you build a building." So says Bob Auer ... who says Wall Street holds the world's largest earth-moving equipment maker in high regard ... Caterpillar is "very much of an early economic indicator."


That being the case, what's that 'early economic indicator' telling us right now?

Zero Hedge put it very succinctly in a report in May this year.

And even though we have previously reported on the woes ailing the world's largest seller of bulldozers, excavators and wheel loaders, such focus was primarily targeted in the offshore markets, and especially China (the abysmal European market needs no mention). So maybe the time has come to shift attention to the US, where as Caterpillar just reported, not only are all foreign markets still trending at several impacted levels, but where US machine retail sales just saw the biggest tumble in three years, falling 18% Y/Y: the most since early 2010. What is more disturbing is that CAT equipment is used in far-broader economic activities than merely housing, and likely is a far more accurate indicator of true industrial end-demand than any other number cherry-picked by the government. 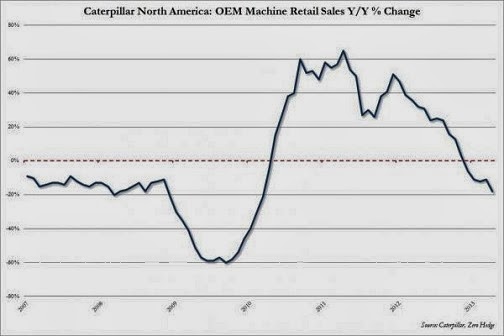 Whether one can extrapolate general trends in the US economy based on how Caterpiller is doing in its North American market, is an open-ended (rhetorical) question which we leave to readers.

However, maybe a far better question is whether CAT NA sales is the same true proxy for the state of the US economy, as electric consumption - that Achilles heel of Chinese economic data manipulation - is to China.

Compare and contrast the chart above, with the chart below, showing the collapse in Chinese electricity consumption. 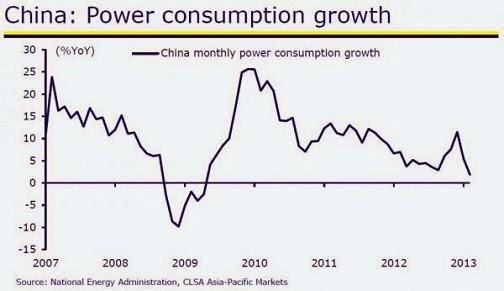 If the answer is yes, and if indeed both the US and Chinese economies are now operating at a true level not seen since 2010, then just how bad is the rest of the world, if somehow the US continues to be perceived as the cleanest dirty shirt while the world's fastest marginal growing economy is in fact, crashing to earth?

Folks, despite all the warm-and-fuzzy, snug-and-cozy reports you're going to read in the mainstream media over the next couple of months (paid for by the corporate shills that control them), you can take it to the bank that this Christmas season is going to be a lousy one for most retailers and consumers.  I can tell you right now that I simply won't believe any spokesman who claims good sales or great business.  The fundamentals simply aren't there.  Take a look at the parking lots of most shopping malls and big-box stores these days.  With the exception of peak shopping days, they're half as full as they used to be, sometimes even less than that.  There are many weekday mornings when they're almost deserted, even in big cities.  It used to be the case that they had a constant flow of shoppers.  Not any more.  Consumers are simply tapped out.  They no longer have much discretionary spending money to play with.  That's why the quarterly results of most major retailers (some of which are linked above) are so dismal.

I have several sources of information (not just the mainstream media) concerning what big business is stocking, and how much of it they're ordering.  I can tell you their orders for this Christmas season are a lot lower than they were for the past few years.  They know what's coming . . . they just aren't willing to talk about it, for fear that would spook shoppers even more than they're spooked already.

This economy's in a downward spiral.  It's getting steeper, and we're moving faster.  All the political machinations and bureaucratic shenanigans in Washington D.C. aren't doing a thing to change that.  They can't, because none of our politicians or regulators - on either side of the aisle - are paying any attention to the real problems we face.  They're fiddling while Rome burns, or rearranging the deckchairs on the Titanic, or whatever other idiom you care to use that describes their blind stupidity.  Meanwhile, we're suffering - and there's more on the way.

The retail construction industry's booming in Canada - the smart US chains are opening Canadian stores as fast as they can to make up for slow US sales.

We do not live in a perfect world. And economists do not make policy decisions, financiers do. That's a big difference.

I suppose it all depends on what you want to do with the information. Whatever that may be, you still have to play the hand you're dealt at the time you're dealt it the best you can.

Read ZeroHedge along with lots of other sources, come to your own conclusions, verify them and act accordingly.

We may be on a foolish path, but Zerohedge seldom accounts for another foolish (or wise) policy to counteract our present foolishness. Their thinking seems to be rather linear, assuming the same will continue - a bad habit ingrained by mathematical models and statistics.

Cat just announced that they are shutting down an entire plant in SW VA early next year. The smiley news readers on TV are not smiling much about that story. They fall all over themselves to report how some fool opens up a new coffee shop that will employ part time noobamacare employees and under report when a major company closes. I would tell the Anonymous guy that it is time to despair!

@Anonymous at 12:58 PM: You single out Zero Hedge for criticism, but I've cited many more sources in my article. It's no good targeting just one of them, as if the others don't count. The overall economic picture isn't just gloomy, it's bloody awful - and Zero Hedge's perspective on it is basically irrelevant to the facts of the matter.

But the auto industry counts a "sale" as a car/truck invoiced to a dealer--NOT a car/truck sold to a consumer.

And dealers are definitely slowing down, at least in the Upper Midwest.

@Peter at 9:31 PM. For decades, one of my favorite responses to "How are you?" has been: "Things are desperate as usual" ...and it's been true for decades. It's most certainly been true for most the 20th century and well before.

So, the world isn't to your liking. Be Mr. Grumpy Pants. That's one reaction to living in a less than perfect world. I prefer another approach.