Today's award goes to the team that's just submitted their design for the new Al Wakrah stadium in Qatar, to be used for the 2022 World Cup.  It's claimed the design is based on "a dhow boat that Qataris traditionally used for pearl diving", but its resemblance to something else has led to much hilarious (and frequently rude) comment around the world. 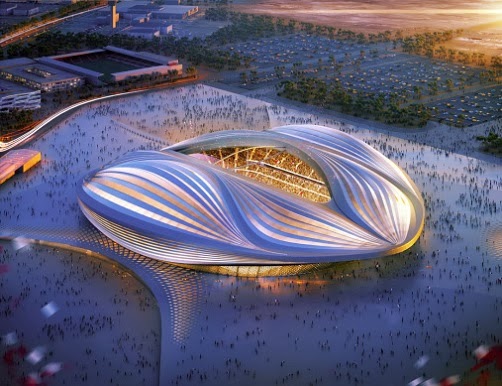 You can imagine to what that design might be (and is being) compared.  I don't even want to think about what the shape might inspire spectators to chant during matches held there . . .

Needs a few trees around it.

Get your laughs in while you can, everyone. Those parts of the world, it's not improbable that someone will be along to hack parts off with a dirty straight razor then sew up the remaining bits.

Ugh. That's way darker and uglier than I'd intended....

Thanks for the reminder Mice_C. Dark is good in this case. Now, THAT is a war on women.

Looks like the Eye of Sauron, with a different color scheme. (Did I hear someone say, "Issues"?)