From the history books, a tale of totalitarian excess


The architect who designed some of Romania's most grotesque Communist-era buildings, Anca Petrescu, has died.  In her obituary, the Telegraph reported:

Anca Petrescu ... was an architect known as the “Albert Speer of Communism”, responsible for the Romanian dictator Nicolai Ceausescu’s “Palace of the People” in Bucharest — the world’s greatest monument to totalitarian kitsch. 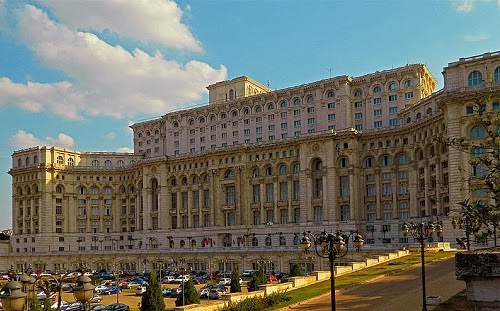 Ceausescu conceived the idea of building the palace in 1977, when an earthquake struck Bucharest leaving more than 1,500 dead and large areas devastated. He saw the disaster as an opportunity to build a new “civic centre”, and in the summer of 1977 two competitions were launched — one for the overall master plan; the other for the “House of the People”, as the Palace was then called, to house Ceausescu and his entourage, along with key government departments.

In February 1982, at the age of 32, Anca Petrescu was appointed chief architect of a project whose raison d’être, in Ceausescu’s tautological phrase, was to be “a grandiose edifice that reflects the epoch of the time”.

The construction, which began in June 1984, was a project akin to the pyramids. During the five years leading up to Ceaucescu’s execution one million Romanians, including military conscripts, political prisoners and a team of 700 architects, worked round the clock to put it up, painstakingly carving huge oak, elm and cherry doors and sculpting giant crystal chandeliers for marble rooms almost as big as athletics fields. 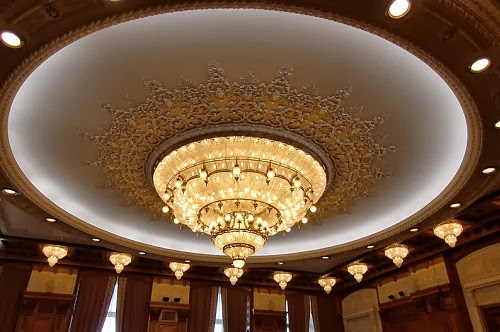 Even nuns were forced to work, weaving acres of carpets and embroidering gold-threaded curtains. There were never fewer than 20,000 workers on site at any one time; deaths were common.

The project had a huge impact on the Romanian capital. Three historic districts in the centre of Bucharest — four square miles of the city — were demolished, along with 27 churches and synagogues. Around 40,000 people were given only two days to leave their homes, and some had no alternative but to leave behind their possessions for the bulldozers.

Elsewhere, two mountains were hacked down for the one million cubic metres of white and pink Transylvanian marble required, while entire forests were destroyed for panelling, floors, furniture and doors (Ceausescu insisted that all materials used should be native to the motherland). The cascading chandeliers alone accounted for 3,500 tonnes of crystal; the largest, measuring nine metres in diameter and weighing five tonnes, had 1,000 light bulbs.

By the time the palace was completed, it could burn more electricity in three hours than all of Bucharest’s two million inhabitants consumed in 24. Between 1984 and 1989, while the Romanian people were struggling to survive with limited heating and meagre rations, the building consumed 30 per cent of Romania’s national budget.

Ceausescu took a close interest in its construction, terrifying the workforce with impromptu visits to the site and frequent changes of mind which resulted in the building featuring a mishmash of styles. Anca Petrescu recalled how, on one visit, he claimed to notice that some carved flowers decorating columns inside the building were not equal: “I never noticed that,” she recalled. “I was exhausted and the others were petrified... We all swore that it was OK.” But he ordered someone to climb a ladder and measure them, and determined that one flower was one centimetre shorter than the others. The columns had to be made all over again.

The tyrant visited the palace for the last time in November 1989, to witness the first completed room — a month before he and his hated wife Elena were executed on live television by firing squad.


There's more at the link.  Images are courtesy of Wikipedia.

Isn't it odd how almost every totalitarian regime, on both the Left and the Right of politics, ends up building grandiloquent monuments and structures?  Hitler, Mussolini, Stalin, all of them - same old, same old.

I stayed in the Marriot just across the street from there. It was my understanding that the Pentagon was just slightly larger in size then the Palace.

One of the things that occurred when the people were forced out was they were not allowed to take their dogs with them to the new governmental housing flats. Now packs of stray dogs set up territories and have nightly gang fights. The Marriot had their dogs which barked at the military headquarters dogs next door every night.

When I was there for a NATO CBRN dog and pony show in 2010, the Palace was basically empty and most of the rooms vacant. The grounds were kept up and it was nice place for a run in the morning.

Wait, uh, the three you mention are all Left wingers: Socialists and Communists.
The Progressives have been painting the Nazis as right wing types for a long time. Not true. " National Socialist German Workers' Party" is pretty declarative.