The long, slow decline speeds up


I'm more and more certain that our political lords and masters don't actually care about what we want or need.  (Yes, I know they're technically 'elected leaders', but that's not how they regard themselves - just witness how often they pass legislation that's opposed by the vast majority of their constituents, and get away with it every time.)  They've got theirs - at our expense.  Sucks to be us.

The signs of economic decay are all around us. I don't think we're necessarily going to experience a single defining event such as Black Tuesday, although I won't be in the least surprised if this nation or even the entire world go through more than one such disaster. Whether or not that happens, what's already happening is that slowly, steadily, inexorably, we're sliding further down the slope of economic misery . . . and there appears to be no political will whatsoever to stop that slide.  Instead, politicians are 'going with the flow', because they can always attempt to blame the decline on their opponents, or on 'the rich' who aren't paying their 'fair share', or on nameless, faceless conspirators (see Venezuela, decline of), or something else. They're banking (you should pardon the expression) on our becoming accustomed to the decline, so that we don't rise up in outrage to get rid of them.

The decline's been in progress for a long time.  Karl Denninger put it admirably in a recent article.  Quoting a Bloomberg report that noted 'there is no guarantee that wages will keep pace with prices', he observed:

See, inflation is simply the change in money supply.  And since in all modern monetary systems all money is in fact debt we can simply look at the total amount of debt in the system to determine the factual money supply -- that is, what can change hands at any given point in time.

So how has income done?

Fortunately SSA provides us that answer across the entire population in the form of their average wage indexes (and they ought to know since they get the tax data for everyone who has a job.)  The average wage has moved from $12,513 in 1980 to $42,979.61 as of 2011, the last year for which data is available.  (BLS's hourly data is only a subset of this for non-supervisory, production employees.)

Note that today's average is 3.43 times higher than 1980 while the money supply has gone up by a factor of 13.

Put another way the average American has had almost three quarters of his or her earnings power in monetary terms destroyed in the last 33 years.

This should have long ago prompted an upheaval in our nation and a complete ejection of those in power, both at The Fed and in our Government.  It is for this reason and no other that we have seen a gross and outrageous ramp in dependence on welfare, food stamps, disability and other forms of "handouts."

Yes, you really are, if you're an average American, getting poorer . . .


There's more at the link.  I might add that his numbers are entirely correct - in fact, because they're drawn from official US government statistics, they may even be understated, because the US government has consistently demonstrated that it isn't above lying to its people by manipulating official statistics to suit its own propaganda purposes.

So, there you have conclusive evidence that the decline has been in progress for at least 33 years.  In fact, of course, it's been going on for much longer than that.  For example, a few years ago, Zero Hedge put up this chart illustrating the decline in purchasing power of the US dollar from 1920 to 2009.  (Click the chart for a larger view.) 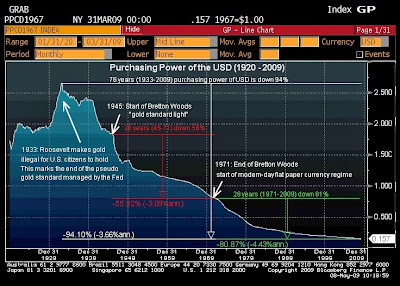 ... the purchasing power of the dollar over the past 76 years has declined by 94%. And based on current monetary and fiscal policy, we have at least another 94% to go. The only question is whether this will be achieved in 76 months this time.

I'm not going to waste time going further back than 1920.  Anyone who's interested can do their own search for information on the Internet.  It'll just illustrate that the problem is the same old, same old, whatever the period under discussion - and I think the data proves my point.

What we're seeing now is an acceleration of the long, slow decline.  Where in years (and decades) past we became accustomed to a gradual erosion in our purchasing power, now it's declining faster.  Where in the past the benefits provided by the 'nanny state' were pretty good and economically worthwhile, now they're worth a whole lot less.  The latest example is Obamacare, which has resulted in tens of millions of Americans losing their low-cost, more-than-adequate medical insurance and being forced to buy much more expensive policies offering less effective coverage for their needs.  (Here's how one cartoonist sees that reality.)  What's more, the younger generation (who have to buy into Obamacare in order to subsidize the health costs of older people who need more health care than they do) are staying away in droves.  This will make the whole insurance side of Obamacare financially untenable, and force an even greater involvement by Big Brother to cover the costs.  It's a massive tax increase, and a dramatic expansion of the 'nanny State'.  Our liberties are being further and further eroded every day.

The USA is not alone in this trend.  All over the world, the 'welfare State' is becoming too costly to bear;  so governments are either cutting benefits, or raising taxes, or incurring massive (and unpayable) public debt in order to finance entitlement programs.  In many cases, they're doing all three.  They're also, behind the scenes, encouraging massive inflation, in the hope that it'll reduce the otherwise unaffordable debt to manageable proportions over a decade or two.  The fact that inflation will further damage the spending power of every one of their citizens is not something that worries them.  Since it'll happen over time, they won't have to answer for it right away;  and by the time they do, the current generation of politicians will have retired on their gold-plated, inflation-indexed political pensions (which, in the case of the US Congress, are said to be 'about two-to-three times more generous than the average corporate executive pension plan').  It'll be someone else's problem.

Consider just a few articles from the past week that illustrate the problem.  Click on each link to read the article in question.  (They're all very informative, and recommended reading.)


I could go on listing article after article, but why bother?  That selection will give you plenty of reading matter.  The common thread running through them all, of course, is that governments will do whatever the politicians have to do in order to survive.  You and I, taxpayers, voters and citizens, are expected to take it in the shorts because "it's in our best interests in the long term".  That's complete and utter bullshit.  It's in the politicians' interests, and in the interests of those who've bribed them / bought and paid for them / contributed to their re-election campaigns.

What's more, by extending 'entitlement' programs to the broad mass of the electorate (not just those who need them for short-term assistance during difficult periods), politicians have ensured that those who, as Business Insider put it in 2009 (see chart below) 'suckle on the Government's teat', will vote for those whom they believe will ensure the continued supply of 'freebies' through that teat. 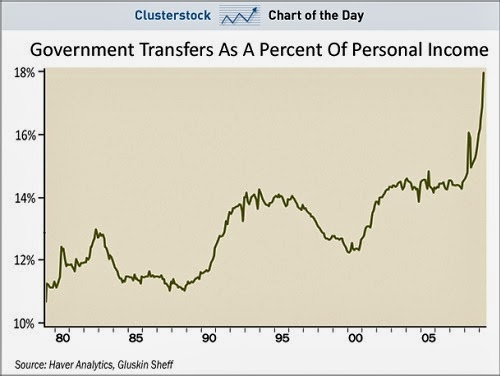 Note that those 2009 figures are an average across all Americans, not just those who are mainly supported by entitlements.  They're probably much worse today.  Many of the beneficiaries don't seem to care that in order for them to get those 'freebies', someone else is being robbed blind through taxation, or that the national economy is being crippled by ever-increasing debt.  An increasing proportion of the electorate will vote themselves 'bread and circuses', and damn the rest of us.  They display this attitude in their private lives as well as with government handouts.  Nor are such attitudes confined to those using basic 'entitlements' like welfare, unemployment benefits, food stamps, and so on.  Rich individuals and corporations demonstrate them too.  (Watch John Stossel's excellent special report 'Freeloaders' for all-too-graphic illustrations of what that means.  It's 40 minutes long, but it'll be 40 minutes of your time well spent.)

That's a very good reason why, IMHO, recipients of significant government entitlements should lose the right to vote for the period during which they receive them . . . but that'll never happen under our present system.  Just imagine the screams, not only of the recipients, but of the politicians who've 'bought' their votes with those entitlements!  Their 'investment' (using our tax money) would suddenly be worthless.  Mitt Romney's infamous '47% comment' may have been politically incorrect, and may have done serious damage to his 2012 Presidential campaign;  but in reality, as journalist Alex Klein uncovered, it probably wasn't far from the truth . . .

The economic catastrophe that so many (including myself) have been anticipating for so long has already revealed itself.  It's not so much that it's going to be a big explosion in the not too distant future (although that may happen as well, and I think it probably will).  It's already happening, day in, day out, right in front of our eyes.  We're losing ground steadily, rather than all at once.

The only defense I know is to pull in your horns.  Reduce (preferably eliminate) debt;  live within your means;  avoid the use of credit to finance your major purchases (if you can't afford it, save for it;  if it's too big to save for, don't buy it at all).  The only exception is property, if you absolutely have to buy a place to live.  Personally, I'd say it's better to rent and be flexible.  Property can be an anchor, tying you to one place, so that if you need to move to get a job, you're less able to do so.  Furthermore, we saw what happened to property prices in 2007/08 and thereafter.  Many homeowners and mortgage holders found themselves 'underwater', owing more (sometimes much more) on their properties than they were worth.  If that happens again (and I confidently predict it will), your investment in your property will be not just wiped out, but become a liability.

If rents are too high, look at something cheap further out of town - even if that's a strip of land on which you can park a mobile home or travel trailer.  I know several families who've pooled their resources to do precisely that.  Despite the stigma attached to 'trailer trash', they're collectively saving thousands of dollars every month.  They're helping each other with things like child-sitting, mutual security and shared shopping runs, living within their means, and thriving.  I've lived in a trailer myself before now, and if the economy goes on doing what it's doing (and if I don't sell enough books!), I may end up doing so again.  So be it.  That's life.  It can still be a good one.

Sadly, it is much easier to pass the buck while kicking the can down the road as one whistles past the graveyard than to actually fix the problems.

Any real fixes are going to break a lot of ricebowls, and will be deeply unpopular. Especally since the media is deeply against any real helpful changes.

For instance, remember when W proposed fixes to Social Security? Kind of like that, but more so.