It's been a long time since I put up an 'Around The Blogs' summary of posts I've found interesting, educational or amusing in the blogosphere.  Here goes with a belated edition.

I noted with displeasure that the story of 'Paul Mallory' and his labrador retriever 'Reggie' (a.k.a. 'Tank') is doing the rounds again, as it has several times since its first appearance.  This story is a fake.  It's another of those Internet myths composed by someone who had more time available than honesty or integrity.  If you come across it on another blog, please point the blog owner to the Snopes entry debunking it.

Linoge at Walls Of The City points out what laws do - and don't do.  It's a valuable summary of why passing laws won't do much - if anything - to solve the problems of crime and violence.  Recommended reading.

Ace Of Spades has a fascinating article pointing out how the progressive left wing of US politics began to experience mental and cognitive dissonance with the assassination of President Kennedy, and how the problem has only grown worse since then.  A sample sentence:

Rather than thinking in terms of the divine and magic in the area of theology and metaphysics -- which is really where thoughts about the divine and magic should be contained -- the left, being Bad at Secularism, instead permits superstition, myth, and magic to flood into all other compartments of their ship of the mind.


It's a very interesting article, but it also provoked me to think about how the right wing of US politics does precisely the same thing.  Both extremes, left and right, are closer to each other in the way they think and react than either would be happy to admit.  Makes you think, doesn't it?

At any rate, go read the article for yourself, then see whether you can identify instances where similar derangement occurs elsewhere on the political spectrum.  Useful food for thought.

Karl Denninger points out why you should never, ever buy any consumer product with a non-user-replaceable battery.

The reason?  You're buying something that has a pre-determined self-destruct built into it.


He has good arguments from his own experience to back up his point.  Worthwhile reading.

We looked at crass stupidity about the food stamp cuts in these pages recently.  Now DiveMedic brings us his experience of a couple who were upset at losing a baby - twins, actually - "because they were counting on the extra welfare and food stamps to buy a new car".

If you want a living definition of both 'welfare junkies' and the 'entitlement society', that's it, right there . . .

(See also Forbes on 'America before the Entitlement State' and the Daily Mail on how the UK's welfare system has created an Age of Entitlement.)

Charles Hugh Smith asked last year, "Is Anybody Else Tired of Buying and Owning Stuff?"  In the light of forthcoming Black Friday sales and the Christmas season, it's a timely question and one worth re-visiting (hence my mention of it here).  You may be sure I'm thinking very carefully about it, particularly in these hard economic times.

My friend, fellow blogger and fellow author Marko Kloos comes to some surprising conclusions about the best tablet for his use as a writer.  It's food for thought for those who use a tablet as more than a mere entertainment device.

Rev. Donald Sensing brings us an amazing video clip of falling dominoes, probably the most complex arrangement of its kind that I've ever seen.  Recommended viewing.

Momma's Gone City brings us a series of heart-warming photographs of a baby boy and his puppy, and the story behind them.  Here's one example. 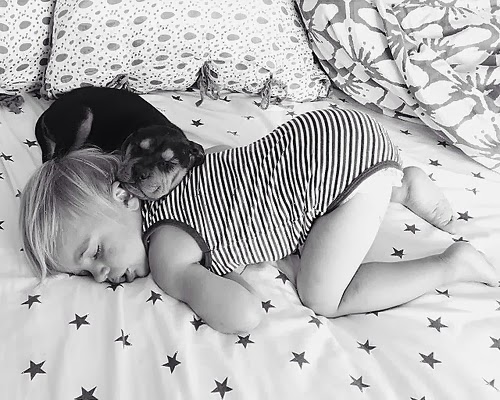 Yes, it's your feel-good warm-and-fuzzy reading of the week!  Recommended reading.

Blue's Blog brings us a well-known story about the chemical properties of Hell.  It's been around for some time, but I'd forgotten it until Blue reprinted it.  It made me laugh just as much now as it did the first time I read it, so I thought you'd enjoy it too.

Never Yet Melted links to two articles discussing how professors are appointed in academia these days.  Infuriating reading to anyone with common sense, but informative as well - particularly to those who still have to deal with such institutions.

Borepatch brings us what he calls "The best argument against man-made global warming".  I'd say he's got a point.

Finally, author and publisher Kristine Kathryn Rusch brings us a reality check about what it takes to be a successful writer.  You may be sure I've considered her words long and carefully!  Those of you interested in the field will find much food for thought in her article.

That's it for now.  I'll try to produce more 'Around The Blogs' features, as I used to do before.  There's a lot of good material out there, and it deserves a wider exposure.