"The Most Honored Photograph"


That's the title of an article about a famous photographic reconnaissance mission during World War II. I was led to it by an e-mail from reader S. K., to whom my thanks. I knew about the mission before, but the article provided added background information.  Here's an excerpt.

In June, 1943, the U. S. had secured Guadalcanal in the southern Solomon Islands. They knew the Japanese had a huge base at Rabaul, but were certain there were other airfields being built in the Northern Solomon Islands. They asked for a volunteer crew to take photographs of Bougainville Island to plan for an eventual invasion, and of Buka airfield on the north side of the island to assess for increased activity there. It was considered a near-suicide mission — flying hundreds of miles over enemy airspace in a single, slow bomber. Not to mention photoreconnaissance meant staying in level flight and taking no evasive action even if they were attacked.

The only crew that volunteered ... was Jay Zeamer and the Eager Beavers. One of the crew, bombardier Joseph Sarnoski, had absolutely no reason to volunteer. He’d already been in combat for 18 months and was scheduled to go home in 3 days. Being a photo mission, there was no need for a bombardier. But if his friends were going, he wanted to go, and one of the bombardier’s battle stations was to man the forward machine guns. They might need him, so he went.

Zeamer held the plane level (tilting the wings even one degree at that altitude could put the photograph half a mile off target) and Kendrick took his photos, which gave plenty of time for over 20 enemy fighters to get up to the altitude Old 666 was flying at. 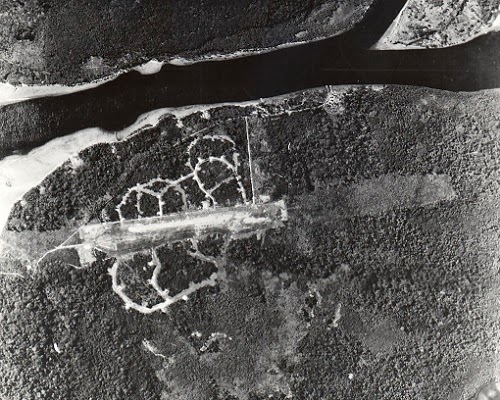 The photograph of the Japanese airstrip at Bougainville
taken by Capt. Zeamer's aircraft

The fighter group, commanded by Chief Petty Officer Yoshio Ooki, was experienced and professional. They carefully set up their attack, forming a semi-circle all around the B-17 and then attacking from all directions at once. Ooki didn’t know about the extra weapons the Eager Beavers had mounted to their plane, but it wouldn’t matter if he had; there was no way for a single B-17 to survive those odds.

During the first fighter pass the plane was hit by hundreds of machine gun bullets and cannon shells. Five crewman of the B-17 were wounded and the plane badly damaged. All of the wounded men stayed at their stations and were still firing when the fighters came in for a second pass, which caused just as much damage as the first. Hydraulic cables were cut, holes the size of footballs appeared in the wings, and the front plexiglas canopy of the plane was shattered.

The battle continued for over 40 minutes. The Eager Beavers shot down several fighters and badly damaged several others. The B-17 was so heavily damaged, however, that they didn’t expect to make the several hundred miles long flight back home. Sarnoski had already died from his wounds. Zeamer had continued piloting the plane despite multiple wounds. Five other men were seriously wounded.

Flight Officer Ooki’s squadron returned to Buka out of ammunition and fuel. They understandably reported the B-17 was destroyed and about to crash in the ocean when they last saw it.


There's more at the link.  Recommended reading for aviation and military history buffs.

Yep, never count out the 'misfits'... :-) One heck of a story, and one more of the 'little' stories that really were the guts of the military actions during WWII.

I am pretty sure I saw an episode on the Military History channel about this.

Misfit doesn't mean unable or incompetent, just means they haven't found the right shape socket to plug into. America was made by, and for, misfits. And as long as the push for diversity doesn't stamp out all shades of difference aside from the officially certified acceptable flavor of non-traditional we'll do fine.