I'm sure almost everyone interested in the history of aviation has heard of the Lockheed Vega, produced from 1927 and used by such notable figures as Amelia Earhart and Wiley Post on some of their record-breaking flights.  I thought all of the survivors were in museums, but it seems one of them is in the air again.  As the Nordo News put it:

Today, December 17th, 2013, John Magoffin put one thing right in aviation; he returned a Lockheed Vega to the air. Others exist but they do not fly and that is important. Without the roar, a lion is not a lion; mounted heads do not make a zoo and static airframes do not make an airport. A plane that does not fly cannot stir the soul. For John though that will not be an issue. This beauty is sure to turn heads and stir emotion wherever it lands.


As the only flying Vega in the world, I'm sure it will!  Here's a video report of the first flight.  I recommend watching it in full-screen mode.

You may have noted in the video clip that the pilot was making a rocking motion as he pumped at something with his left hand.  That was the wobble pump, supplying fuel to the engine.  You can read an explanation of how it works and see an animation illustrating its operation at the link.  I guess most pilots who've trained since World War II have never encountered one, but in the Vega's heyday, it was high technology!  Here's a picture of the restored Vega's cockpit instruments and controls, including the wobble pump (behind the throttle quadrant). 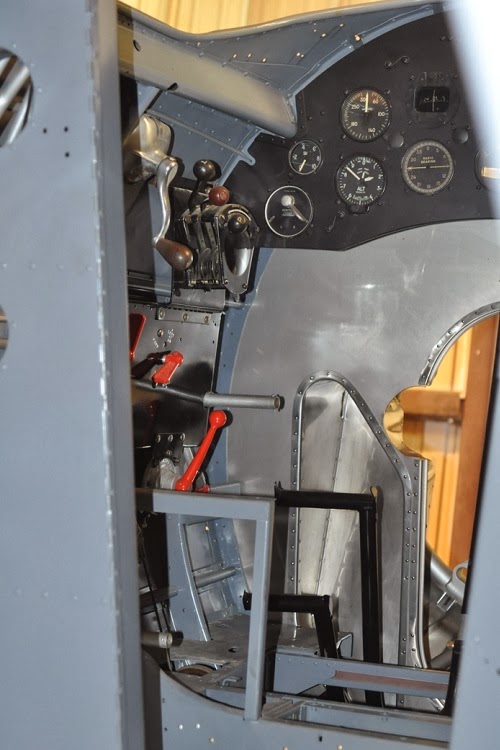 There are more photographs here, showing the restoration in progress.  In fact, the entire Antique Airfield Web site offers engrossing browsing for those interested in aviation history.  Recommended.

Way back in 1956, an Uncle took his 6 year old nephew to a small flying field, just a small field with a 22 yard long cricket pitch in the centre, but no cricket was being played that sunny sunday.
Model aeroplanes were flying from that manicured grass pitch, control-line, and primitive pulse-radio controlled.
All around was scattered the most exotic, exciting things he had ever seen.
Model aeroplanes, some with real petrol engines, rubber band power in others, and gliders.
The sights, sounds, smells, and activity combined to drug his senses, explode his imagination, the boy never recovered.
What I experienced that day didn't alter my life,-what 6 year old boy has direction?.
It MADE my life.
Aviation, Flight, made me, though I'm not a pilot, all that is flight became my life's foundation, a very happy, joyful experience.
My Family and I have travelled the world, just because an Uncle took his nephew to see some aeroplanes.
His legacy, of his deed that day, has had profound inter-generational effect.
I would not be surprised if one of his Grandnephews or Grandnieces kicks the red dust of mars.
I hope so.

Oops, I forgot to say...
What an absolutely beautiful thing has been done here, it is said in Aviation that, if it looks right, it is'.
This Lockheed Vega looks VERY right indeed!.
The sound of that radial is pleasure beyond moral dignity.
Peter, THANK YOU for this post, fabulous, simply fabulous.

Peter, there is no such thing as an aircraft where you have to pump the fuel pressure up in order to keep the engine running in flight. It would be unsafe and very tiring for the pilot.

Here's a video where you can see the pilot working the wobble pump until the engine catches.

DC-3s used an electric pump at each engine rather than running fuel lines into the cockpit, a much safer arrangement. Beech 18s had the plunger style primers. I was in the copilots seat on a Beech 18 and when the pilot primed the engine fuel squirted from the leaky shaft seal of the primer onto his hand in which he was holding a lit cigarette. We were carrying
almost a ton of forcite, a mining explosive at the time.

Hi,
First thanks for the kind remarks and very positive feedback! It was a real thrill to fly the Vega.
The trim crank handle and the wobble pump are located very close to each other on the pilot's left side.
I use the wobble pump for starting the engine or emergency. Normal pressure is from an engine driven fuel pump.
In the video, I was cranking the trim handle to bring the nose up, as we did not have an accurate trim setting for takeoff. We had 200lbs of lead shot in rear compartment for ballast.
John M.