Down a bobsled run - in a car?


I'd never heard of taking a car down a bobsled run;  but in its obituary for the late Henry Taylor, the Telegraph noted that this was one of his achievements.

Born at Shefford, Bedfordshire, to a farming family on December 16 1932, Henry Taylor competed in speedway before switching to four wheels in October 1954 with a Formula Three Cooper Mark IV-Vincent. His talent quickly shone through and, driving a Cooper Mark VIII-JAP and Mark X-JAP, he won Britain’s 1955 and 1956 F3 JAP Championships.

Taylor’s love of speed also saw him become an established bobsleigh driver and in 1956 he won the Fairchilds Morgan Cup on St Moritz’s Cresta Run. He finished second in the 1957 European Four Man Junior Championships at the Swiss resort with Robin Dixon, later Lord Glentoran, as brakeman, the pair becoming members of Great Britain’s team at the 1958 World Bobsleigh Championships.

It was in December 1964 that Cortina GTs tackled Cortina d’Ampezzo’s bobsleigh run. The stunt was Ford’s salute to its drivers’ 200 Cortina victories in 21 countries. Some 19 drivers, among them 13 champions and including Jim Clark, Jack Sears, Colin Chapman, Vic Elford, Sir John Whitmore and Taylor, raced down the steep, winding, ice-covered run at over 50mph; the sport of “auto-bobbing” was born. 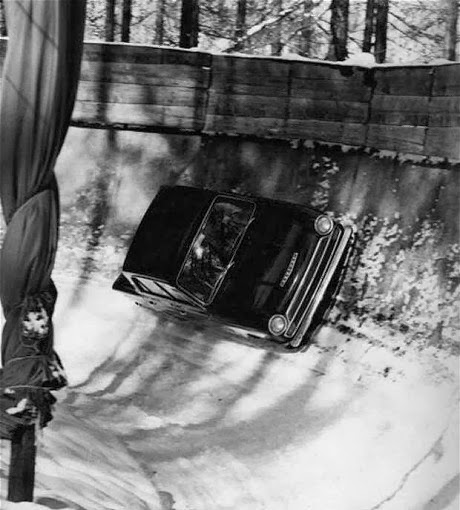 Intrigued at the prospect of a car going down a bobsled track, I looked for more information.  I found this video clip on YouTube.

Have to better that in a bob sled. Have to watch it later though as this is throttle in the network here at work.

Looks like fun, if surprisingly slow given the speeds bobsleds are running today.

You find the coolest stuff.