Cthulhu at your table! 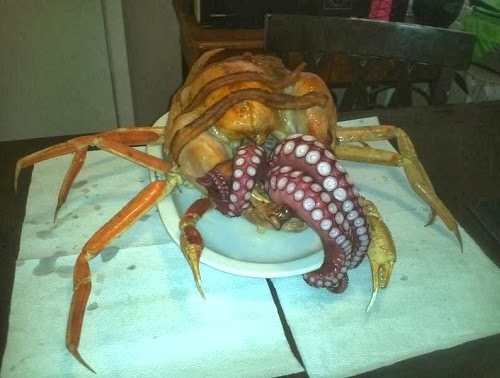 Rusty Eulberg, a database administrator from Lubbock, Texas, tells us he brought forth what he called the Cthurkey about two years ago. Reached by phone at work, Eulberg says, "Apparently my Cthurkey — I always called it a Cthurkey as opposed to a Cthuken (no duck) — blew up online. A buddy of mine just told me he found it on Tumblr."

According to Eulberg, he and wife Jennifer Robledo "wanted to do something unique for Christmas dinner with friends of ours. Jenny is a big fan of Cthulhu so we went and bought some crab legs and some octopus and bacon and cooked them all separate and slapped them together on a plate, and that was it. The next year I made a Cthicken; the same thing using squid instead of octopus and a chicken."

Eulberg says, "The universal reaction was, 'Oh my God, I couldn't eat that.' But each individual piece was cooked separately; all I did was set them together on the plate. It was delicious. The crab leg was awesome and the bacon added a nice flavor to the turkey. And for added horror, the serving platter is an old Nazi plate with a Swastika on the bottom that a friend bought in an old abandoned Luftwaffe base in Germany."


There's more at the link, including more photographs.

I'm sure it's as delicious as he claims . . . but doesn't that look like the kind of meal you'd serve to your mother-in-law to discourage future visits?

That would convince me to lay off the eggnog and wassail for the rest of my life.

Actually, if you explained it to your mother in law prior to her seeing it, she would laugh, and laugh, and go for the crab legs.

But then, your mother in law was known to go head to head with concerned new librarians and win over whether or not your future wife was allowed to be out of the children's section, much less unsupervised in the scifi/fantasy section. So, you know, I'd actually encourage it. :-)