I'm sure many readers are familiar by now with the hilarity generated by the Obama administration's effort to spread the word about Obamacare with this Twitter advertisement. 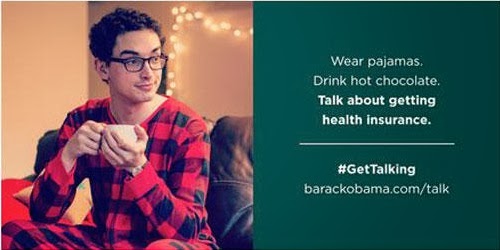 Both liberals and conservatives immediately had a collective attack of hysterical laughter.  I've seldom seen so much lampoonery (if that's a word) of an ad campaign.  For a few examples, see Newsmax, Truth Revolt and Powerline.

The model in the ad has been identified as Ethan Krupp.  Unfortunately for Obamacare, his views are so stereotypically moonbattish that he might be a poster child for all that's wrong with the present Administration, let alone its policies on health care.  I'm not going to quote him directly, due to profanity, but you can read the whole thing here.  It explains a lot.

My next question:  how can the Obamacare promoters recover from this colossal public relations blunder?  I'm sure they're going to try.  I look forward with eager anticipation to their next inspired (?) effort.

the problem is simple. they ran into a culture war of their own making. its only my opinion, and i could be wrong, but i believe that the real war going on socially is against men. the meme "the war on women" is thinly an attempt to make men less masculine and women more.

Pajama boy is simply their vision of man hood on display for the world to see. many Americans laughed at it and because they just showed their view of the world, they didn't see it coming.

As many studies have shown, incompetent people do not realize that they are incompetent, but believe the opposite. For this egotistical twit to believe he has "won every argument" except one only means that he only associates with like-minded people. And he still has the callowness of extreme youth. When I was his age, I lost plenty of arguments, because I didn't have the knowledge and experience those encounters provided. A twenty-something saying that only proves he has never been tested.

They will "recover" the way they always do: deflect, deny, disparage, accuse others of spewing hatred, ignore their own failures, let the media cover for them, and leak or do something distracting hoping to attract attention away. They "plan" news cycle by news cycle, and if they can win the current one, they care not its consequences down the road, because they'll make something up to win that one. Much of the "long term planning" for this crowd is measures in hours.

Agree with Chris and Rolf. Also, as several commenters to that DC article noted, "recovery" with this crowd involves simple pressure forward - ie, as we have seen before, they will just continue to press on with lies about something until it either becomes "truth", or enough time passes that it is forgotten about because american idol is starting a new season.
The main thing that very few people are talking about and it MUST be brought to the forefront - is that the current mess is NOT failure in the grand designs of the progressives. In the catastrophic mess that everyone is concentrating on, lies the "emergency" that the progs need to go ahead and usher in single payer healthcare, and the total control of the population that entails. After all "we've got to do something to get healthcare for all these folks that the evil insurance companies have kicked out". My phrasing may be a little off, but you get the picture.