The good people at Vintage Wings of Canada have produced a wonderful photographic essay about the Landing Signal Officer, the person responsible for guiding planes to a safe landing aboard an aircraft carrier.  The pictures range from pre-World War II to modern times, and from peace to war.  Here's a very small selection from their essay.  They've all been reduced in size to fit this blog. 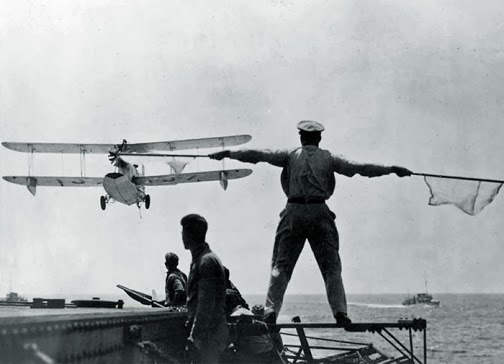 An early image of a US Navy Landing Signals Officer, on board the aircraft carrier USS Lexington (CV-2) in 1931, uses flags to guide an Loening OL-8 amphibian to a recovery on board the ship. 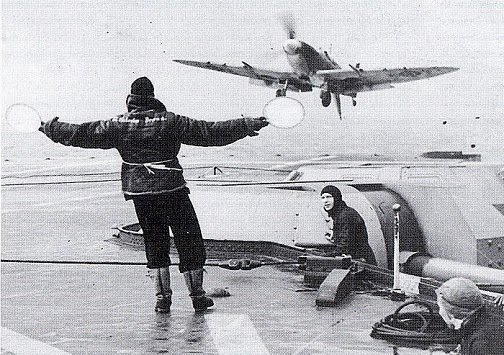 During World War II, Batsman Lieutenant Malcolm Brown, his name painted in white on the back of his Irwin flying jacket, warmly bundled up against the cold North Atlantic with flight boots, works a Supermarine Seafire down to the deck of HMS Indomitable. 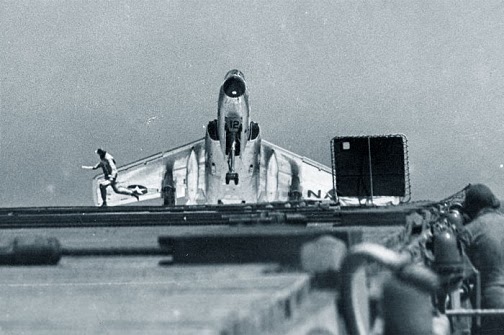 This and the next picture illustrate some of the hazards confronting LSO's on carrier decks.  On 14 July 1955 Lieutenant Commander Jay Alkire, USNR, of the VF-124 "Stingrays", Carrier Air Group Twelve (CVG-12), aboard the USS Hancock (CVA-19) was far too low as he reached the round down (the rounded aftermost edge of the flight deck). In this photo, we see him pitch his F7U-3 Cutlass up drastically in an last minute attempt to avoid striking the stern of the ship.  Ted Reilly, a U.S. Navy Landing Signal Officer, runs for his life. 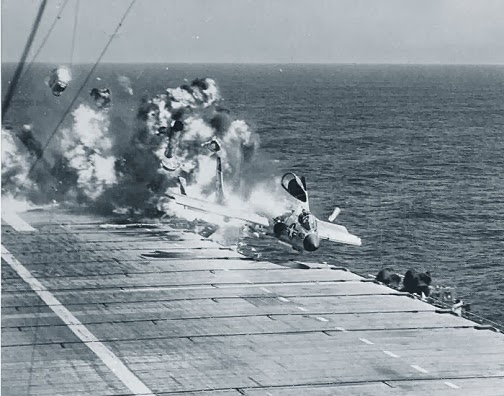 In the tragic aftermath of his round down strike, we see the flaming wreckage of LCdr. Alkire's aircraft bouncing down the flight deck of USS Hancock. LCdr. Alkire was killed when the front of the fuselage hit the water and sank, with him still strapped inside the cockpit.  Three members of the ship's crew were killed when the blazing fuel doused them, but the LSO escaped by running across the flight deck in the opposite direction to that he would normally have taken.  Had he gone the 'normal' way, he'd also have been caught in the burning fuel.


There are many more images at the link.  Fascinating material for military buffs.

EDITED TO ADD:  Due to the interest in this article, as demonstrated by the number of visits directly to it, I've added a recommendation for a book by a World War II LSO.  You'll find it here.