Those who inspired the World War II generation are leaving us faster and faster now, as they get on in years.  A few weeks ago we lost Wing Commander James 'Jimmy' Flint of the Royal Air Force, at the age of 100. 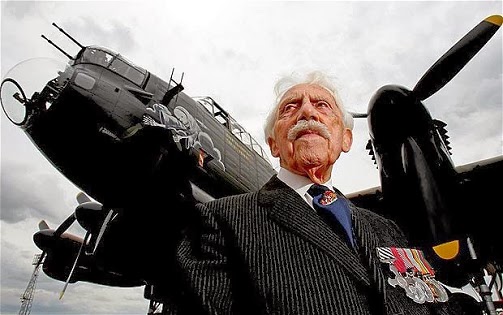 Not only did he have an outstanding war record, rising from an NCO pilot to command a bomber squadron, but he holds a unique distinction.  He was awarded two medals for gallantry for the same action.  The Telegraph reports:

On the night of July 5/6 1941 Flint and his all-sergeant crew took off in their twin-engined Hampden bomber to attack Osnabruck. Shortly after crossing the Dutch coast at 10,000ft the aircraft was caught and held in enemy searchlights. Flint took violent evasive action, but a night fighter attacked, causing extensive damage to the aircraft. As Flint dived away the fighter inflicted further damage. Eventually, after 10 minutes, and by descending to 500ft, Flint was able to shake off the fighter and escape.

Unperturbed, he climbed back to bombing height and headed for the target. But the aircraft was again caught by searchlights, and was unable to evade them until Flint had jettisoned the bombs. He finally escaped at 1,000ft, when he headed for the North Sea.

The Hampden was 50 miles from the English coast when two Messerschmitt Bf 110 fighters appeared and set up a series of devastating coordinated attacks. Flares were ignited in the cockpit, and the aircraft’s radio and internal communication system was damaged, making it impossible for the crew to contact one another.

The fighters made three more attacks, and the port engine of the bomber was set on fire and some of the crew wounded. Flint turned off the fuel to the damaged engine and flew a few feet above the sea before the fighters finally broke away.

As he approached the coast near Cromer, Flint realised that he would be unable to climb over the cliffs. He turned away and ditched the bomber 800 yards from the shore.

Two of the crew were able to get out of the aircraft, only to discover that the dinghy had been holed. Flint also escaped, but immediately realised that the navigator was missing. He crawled back into the sinking bomber, where he found his badly wounded comrade. As the aircraft began to go down, Flint hauled the helpless navigator through the escape hatch. With no dinghy, Flint supported the unconscious navigator as he swam and dragged him towards the shore. Fifty yards short of the beach a soldier arrived to help, allowing Flint to scramble ashore. There was no sign of the air gunner, and he asked for boats to search for the missing man.

Flint refused to leave the beach until it was clear that the air gunner had been lost. He then walked a mile to a waiting ambulance and was taken to hospital.

He was awarded an immediate DFM for his “cool courage and determination to strike at the enemy”. When the full extent of his gallant efforts to save his crew became clear, he was also awarded a George Medal, the citation concluding: “This airman displayed great gallantry, fortitude and disregard of personal safety in his efforts to save his helpless navigator.” Sadly, the navigator succumbed to his wounds.


There's more at the link.  Here's W/Cdr. Flint speaking of his wartime adventures at the Nottingham and United Services Club in November 2011.

May he rest in peace. We are the poorer for the passing of such men.

You find the coolest stuff