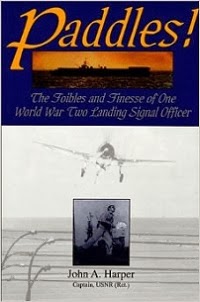 My post last night about Landing Signal Officers seems to have attracted a fair amount of attention, with more visits than usual.

For the benefit of those interested in the subject, I wanted to let you know about a very good book by a World War II LSO.  It's titled 'Paddles!: The Foibles and Finesse of One World War II Landing Signal Officer', by retired Captain John A. Harper.  It's already on my bookshelf, and I've read it several times.  (Perhaps oddly for a book about Naval aviation, I bought it at the bookstore of the USAF Museum in Dayton, OH a couple of years ago.)

Captain Harper writes an absorbing tale of being inducted as an LSO at the very start of his naval aviation career, as a newly-commissioned Ensign, and staying in the job throughout World War II despite repeated attempts to transfer to combat aviation.  (He managed to sneak in several combat missions regardless of his job, in the finest Naval tradition.)

I recommend it as a very useful introduction to the art and science of the LSO - and if anyone thinks it's not an art, reading this book will cure them of that misconception!