I've long appreciated the virtues of the Russian 7.62x39mm. round (the cartridge used in the ubiquitous AK-47 and SKS rifles).  It's low-recoil and very controllable by the average shooter, adequately accurate (although no match-winner), very reliable, and more than powerful enough for combat purposes (I should know - I've been shot twice with it!), or for hunting small to medium-sized game (it's ballistically comparable to the US .30-30 cartridge). 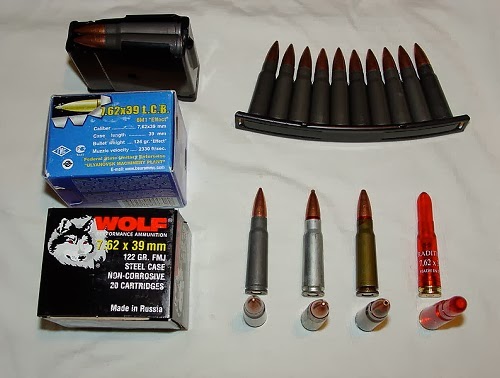 I've owned both AK-47 and SKS rifles in the past, but I've hankered after a bolt-action rifle chambered for the same cartridge.  The reason is very simple.  If one wants to train frequently with a bolt-action sporting rifle, ammunition can get very expensive, very quickly;  and rimfire rounds such as .22LR, while relatively cheap, don't have the same recoil or shoot out to the same range as more powerful centerfire rounds.  However, military-surplus or similar 7.62x39mm. ammunition is so cheap (typically about 20c-25c per round) that it's hardly worth reloading for the caliber.  Furthermore, it's low-recoil enough that it can be used to train new shooters without inducing a 'flinch' that will affect their accuracy.

Czech riflemaker CZ introduced a light, handy bolt-action carbine in that caliber, the Model 527, some years ago.

It attracted favorable reviews, but was hard to find - CZ-USA doesn't seem to import many, for some reason.  I've been looking for one for some time, and yesterday spotted one for sale in a Washington gunshop.  A quick telephone call and a couple of e-mails later, and it's mine.  It wasn't cheap, but since they're so scarce, I wasn't in a position to argue.  It should arrive at my local dealer for transfer next week.  Color me happy!  That's my Christmas present to myself.

Labels: Boys and their toys, Christmas, Firearms, Me me me, Warm Fuzzy Happy Stuff
Email ThisBlogThis!Share to TwitterShare to FacebookShare to Pinterest

Well now if you have been shot TWICE with a 7.62x39 and lived then that kinda says its NOT the combat round you think it is. But then I'm one of the oddballs that is underwhelmed with assault rifles(carbines) in general. Heck I still think that the 7.62 NATO is on the wimpy side.---Ray

@Ray - it's all about shot placement. Fortunately for me, my opponents weren't very good at that.

A Sa vz. 58. Shoot the same caliber and may be able to change magazines! Gotta have the wood grain plastic, to look nice :)

Steve
(full disclosure - this would be MY Christmas present to myself)

Congrats on the new toy. Looking forward to the range report.

As for the Missus, I'm thinking either a nice new quality handgun, or else get her some new cookware. I hear that women love that at Christmastime.

I've got one of those. It is a fine shooting gun especially with the hair trigger. Push the trigger forward and the next time back it breaks at about 1.5 pounds.

Did not know they were considered rare though.

@Murphy's Law: That comment may explain why you're still a bachelor . . .

Savage makes a bolt action "Scout" rifle in 7.62x39 if a USA made option is preferred (not as pretty as the CZ), Zastava make a mini mauser in the AK round and for those living out side the US Norinco (china's arms company) makes an inexpensive but functional bolt gun in the caliber (worst wood ever but for under 1/4 of the price of the CZ you can't complain).

I am old enough to remember the Finncub rifle. Was available about the time of the GCA 68. Nobody wanted them, they were just military trainer bolt actions made on the cheap by some unknown outfit called SAKO. The actions were rechambered and restocked by custom makers in the 60-70s. It was chambered for the expensive, rare 7.62x39....
Geoff
Who was too young to buy the $61 P-38...

I think I gotta agree with Rev Paul on this one.

The Savage sounds like a good backup plan, anything with an accutrigger is very nice indeed.

Otherwise, I think you might be good if you could find Miss D some more flight hours!

Well, if that's your Christmas present, then for my Christmas present, I want:
1. The stove replaced with a natural gas one.
2. More cabinets and an island in the remodeled kitchen - oh, yes, a kitchen remodel, as long as we're replacing the stove, including track lighting and a better fan. Granite is a good choice for the countertop, don't you think? I'll let you pick which one of the three choices I have ready for the pattern.
3. A full line of Le Creuset cast iron to cook with in my nice new kitchen - don't worry, it's currently on sale for just under a thousand.
4. A nightforce scope for my CZ-452.
5. And season tickets to the symphony, with the promise that you will dress up in a tux and ungrudgingly accompany me to the performances we choose. I have some already picked out for you to choose from.

Ok, I'll settle for a good scope that you install and a date at the symphony. Love you!

Nice carbine, I've had one for some years for the very reason you mention - less expensive ammunition. I have an old Weaver El Paso K3 with horizontal hair - heavy post reticle and it tracks VERY WELL in the thick stuff.

My two complaints about it - 1) high bolt throw, like many CZs, the high bolt means your scope is mounted higher as well. So it doesn't sight as naturally as others. I know that an outfit named Calhoon does (or did) make a low bolt conversion so if it does bother you, you can go this route.

The 2nd - high spare magazine price, about $45 the last time I checked. The original is very well made, but I don't feel comfortable without a back up magazine for ANY of my firearms. Putting one or three back for just in case is prudent - CZ DID stop making these back in the 1990s for a year or so. Popular demand brought it back, deservedly so.

Love that set trigger but its for the bench or the blind, not meant for walking about with it set.

Good gun - you did well.


I have been considering the purchase of a bolt rifle in 7.62 X 39 since reading this post a couple of years ago.

The CZ 527 and the Howa 1500 mini action look like contenders- both get good reviews, but I can't make up my mind.
The Howa combo w/ 3-9X scope and syn. stock is significantly less expensive than the CZ. Not sure how I'd like the plastic stock, and the scope supplied would not be my first choice.
The CZ is a true Mauser action, bored for steel-case ammo. The set trigger is a nice feature but probably not necessary for a banger. There are some reports of misfires due to light primer strikes.

Well I finally took delivery on the CZ 527 Carbine while in CO last week.
My choice was the "Rustic" model with wood stock in a distressed or aged treatment. Checkering is sharp and clean, wood to metal fit is good but not perfect- barrel is freefloated, slightly more clearance on one side.
Machining is well done: few tool marks, no burrs, edge breaks are fairly sharp but clean and uniform. Bolt cycles smoothly and is well finished in the white. The newer, redesigned bolt handle blued. Semigloss metal finish and nice bluing everywhere.
18" barrel #2 contour is flawlessly ground and 1:9.5" rifling appears perfect.
Trigger as supplied is surprisingly good- breaks clean at an estimated 4#. Set trigger is lighter with considerable overtravel. Both are adjustable for takeup, break and overtravel. I doubt I will mess w/adjustmennts and I have no need of the set function. This is not a target rifle.
Hooded front sight is replaceable for elevation and dovetailed rear sight drift adjustable. These are a good match for a carbine of this type and finer than the buckhorn sights on a typical levergun.
50 meter test target supplied W/ rifle showed a 1" 3-rd group at 50 meters.
Also purchased a Leupold 1-4 X 20 Compact scope, and Warne #1BM1 rings (the shortest I could find.) Mounted and bore sighted, this combination clears the eyepiece bell with room to spare, and at only 9.5" long does not overscope the little carbine.
Unfortunately I was unable to test fire on this trip. But when I do, I'll forward a range report.

Quick review of the CZ 527:
I finally had an opportunity to test the new carbine.
Test shots were fired offhand at 4" and 6" steel poppers at ranges of about 30 to 75 yards. Scope was boresighted prior to testing, no adjustments were necessary.

Conditions were not ideal at the location: muddy and blustery, temps in the high 30s. After about a half hour I was shivering and my hands were numb, wobble area increased significantly and no evaluation of accuracy was attempted.
Even under these conditions I managed a fair amount of hits and was able to call my misses, verified by my spotter.

Three types of ammo were tested: Wolf white box, Wolf Military Classic and Chinese Milsurp. Approximately 150 rounds were fired before were forced to leave.
There were no failures of any kind.

Three factory mags were used, each worked perfectly. The feed lips had no burrs but the leading edges were quite sharp. I will stone these to make loading the mags a bit less painful.
Mags inserted easily and securely and released without problem. Takes some practice to change mags without fumbling.
Cartridges fed and ejected without a hitch.

Action is smooth with a slight tendency to bind when bolt is closed.
Trigger is excellent as delivered- shooting buddies were very impressed. I have little use for the set function so only a few shots fired in that mode. It may be useful for accuracy testing.

Inspection of spent cases revealed no issues and there are no evident problems at bore, chamber, barrel, boltface, firing pin or extractor. Wear at contact points appears smooth and even.

Peter-
Looks like it will be some time before I can schedule proper accuracy tests.
But I found this, conveniently done w/ a CZ527:

My testing will not be nearly as extensive, limited by ammo availability. Based on these results I doubt I will be disappointed.