The news of Nelson Mandela's death reached me this afternoon.  It was a sad moment for me, the ending of an era of South African history - and perhaps the harbinger of a much more difficult time ahead, now that his stabilizing influence as 'Father Of The Nation' has been removed.  The other leaders of his generation - Oliver Tambo, Walter Sisulu, Beyers Naudé and the like - have mostly died already.  The few of them who remain - of whom Archbishop Desmond Tutu is probably the best-known - will die soon.

There are those who persist in regarding Mr. Mandela as an unreconstructed Communist terrorist.  Some of them - I've seen their words online - are already lauding his death, speaking of having a drink to celebrate the occasion.  They are fools.  They are blind to facts and to reality.  Certainly he worked alongside Communists, and had constant involvement with Communists in running the African National Congress, its armed wing Umkhonto we Sizwe, and eventually the government of South Africa;  but he always denied that he was himself a Communist.  In my (well-informed) opinion, this is true.  As he stated in his 'Speech From The Dock' at the Rivonia Trial in 1964:

It is perhaps difficult for white South Africans, with an ingrained prejudice against communism, to understand why experienced African politicians so readily accept communists as their friends. But to us the reason is obvious. Theoretical differences amongst those fighting against oppression is a luxury we cannot afford at this stage. What is more, for many decades communists were the only political group in South Africa who were prepared to treat Africans as human beings and their equals; who were prepared to eat with us; talk with us, live with us, and work with us. They were the only political group which was prepared to work with the Africans for the attainment of political rights and a stake in society. Because of this, there are many Africans who, today, tend to equate freedom with communism. They are supported in this belief by a legislature which brands all exponents of democratic government and African freedom as communists and bans many of them (who are not communists) under the Suppression of Communism Act. Although I have never been a member of the Communist Party, I myself have been named under that pernicious Act because of the role I played in the Defiance Campaign. I have also been banned and imprisoned under that Act.

It is not only in internal politics that we count communists as amongst those who support our cause. In the international field, communist countries have always come to our aid. In the United Nations and other Councils of the world the communist bloc has supported the Afro-Asian struggle against colonialism and often seems to be more sympathetic to our plight than some of the Western powers. Although there is a universal condemnation of apartheid, the communist bloc speaks out against it with a louder voice than most of the white world. In these circumstances, it would take a brash young politician, such as I was in 1949, to proclaim that the Communists are our enemies.


There's much more at the link.  I strongly recommend that you click over there and read the whole thing.  It provides much more information about Communism in relation to the struggle of African peoples for independence and equality - a perspective that many in the West don't understand to this day.  I wish that association had never happened, because it produced untold misery for millions and killed countless thousands over the years . . . but let's be honest.  Communism was, for a long time, the only major political movement that was prepared to support African nationalism in its struggles.  The West sat back and made money out of its former colonies (including making multi-millionaires and even multi-billionaires out of the rulers of those former colonies with misallocated 'aid' money, not to mention outright bribes).  If the West had been prepared to live up to its principles of human rights and democracy in Africa, much of the damage done to that continent and its peoples by Communism would never have been possible.

Mr. Mandela was, in my opinion, a statesman - one of very few politicians who rise to that status.  His death removes one of the last restraining influences on more militant African nationalist politicians - and, yes, Communist-influenced politicians - who have been pressing for swifter and more ruthless redistribution of the country's wealth (such as it is).  I think the restraint they've shown in the face of Mr. Mandela's implacable opposition to such destructive tactics may now evaporate, and politics in South Africa may become much more radicalized.  I hope I'm wrong . . . but only time will tell.  One can only pray that his legacy of wisdom, restraint and pragmatism will endure.  Thank you to Quotespick for putting that legacy into this image. 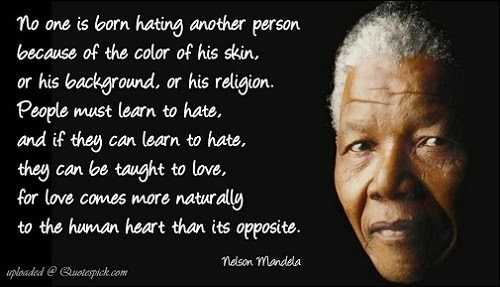 May the soul of Nelson Rohihlahla Mandela rest in peace, and may his sins be forgiven him.

In the tradition of African praise singers, let him be remembered.  (Lyrics and translation here - scroll down to see them.)

EDITED TO ADD:  In response to some comments to this article, and some very misguided articles elsewhere on the Internet, I've written a second article to address the subject of Mr. Mandela's involvement with terrorism in greater detail.

Thanks, Peter. I reserved judgement on the news of his passing because I did not know much about him or how he was viewed by those who did. Your insight is much appreciated and I'll join you in a moment of sad reflection.

Of the SA ex-pats you know, what do most of them think of the man? Good, bad, mixed, some kind of "not what I'd have liked, but far better than the other choices," or what? Haven't heard the "who else, other than communists, was there to work with?" view before, but it makes sense, enemy-of-my-enemy and all that.

Let's stipulate that Mandela did mend his ways, to the extent of forgiving his enemies and striving fr unity in post-apartheid South Africa. It remains an incontestable fact that as a young man he was personally involved in acts of sabotage that cost the lives of presumptive innocents. He was outspoken about it at his trial. That demands that we ask the core question of all civil uprisings: Does the situation Mandela fought against justify his crimes?

It is perfectly legitimate to come down on either side of that question.

Peter,
Yours is the most balanced commentary I've read on the passing of Mr Mandela. I figured it would be. Thank you.
Differ

Never mind the fact that he and his wife are well known for torturing and killing their opponents using a method called "necklacing."

In 1986, Mrs Mandela embarrassed the anti-apartheid community with the statement in a speech that "we shall liberate this country" with "our boxes of matches and our necklaces" interpreted as an implicit endorsement of the political killings by burning which did enormous damage to the anti-apartheid movement between 1984 and 1987.
Anyone caught siding with the government and against the ANC, including policemen and their children, were killed by being bound, having a tire filled with gasoline placed around their necks, and set ablaze.
I cannot justify that, nor can I canonize anyone who would advocate for it.

@Divemedic: Mandela himself was never guilty of practicing or condoning 'necklacing'. I've addressed that in a subsequent article.

@Steve Hoffelt: See my follow-up article about Mandela and terrorism. The link you provided is full of one-sided, propagandistic claims. It doesn't even tell half the story.

Thank you Peter. I was curious to hear your opinion on Mr. Mandela and his life and impact on South Africa.

I think I'll break out that bottle of Van Der Hum tonight and lift a glass to both of you. (Yes, I still have it. I've been rationing it quite closely).

Peter: I read your follow-up article and thank you for it. While we may disagree over particular claims and, perhaps, what constitutes the entire story, I achievement.am glad you have, from experience and the heart, put it out here for us to read and think deeply about. Perhaps Mark Steyn's comment at Hewitt's site is sufficient to my conclusion, as well, that being, "MS: Well, he was a man of enormous grace and dignity. He spent three decades in jail for his political beliefs, and it would have been very easy, particularly once he’d become the champion of a global moment. There were hit pop songs called Free Nelson Mandela, there was a huge all-star rock gala at Wembley Stadium. He was, he became a poster child for the anti-Apartheid cause. And it would have been easy for him once he’d come out of jail to have been a bitter and a partisan and divisive figure. And he wasn’t. He was enormously generous in spirit given what the South African Apartheid state had done to him for the most productive decades of his life. And whatever the problems of South Africa currently, that period when he and F.W. De Klerk, his predecessor, the last Apartheid leader of South Africa, when they basically agreed to a genuine reconciliation, such as one rarely sees in Africa, I think that is his towering achievement.

A "statesman" who cannot inspire others to follow his example is a pretty dismal failure as a statesman.

Mandela has plenty of blood on his hands to account for. He had very little, and certainly no _lasting_, peace to offer to justify his murderous ways.

Albert, you're blaming Mr. Mandela for the failings of others. Life's not like that - unless you want others to blame you for the failures of your family and friends? It amounts to the same thing, after all.

There will always be those who refuse to see beyond their own prejudices, and look at the wider picture. Not for nothing does the very old proverb warn us that there are "None so blind as those who will not see".

Actually, it's if someone were to blame me for the failures of my _disciples_. (Which I _totally_ don't have. I am _certainly_ not any kind of leader, I have founded precisely zero movements, militant or not, and I most _definitely_ do _not_ have any handy assassins at my disposal. _Trust_ me.)

When a man is popularly referred to as the "father" of his nation, it is not only fair to see what/how he's managed to teach/inspire them, it's _expected_, that their deeds may further glorify his name and history.

Or . . . not. Because I fail to see how the leading party of the Tripartite Alliance does _not_ own the last couple of decades of South Africa.