Today's award goes to the National Reconnaissance Office (NRO) for its mission logo for the launch of mission NROL-39, carrying a classified reconnaissance payload.  In the light of the current brouhaha over the NSA's unconstitutional and (arguably) illegal spying on Americans, couldn't it have picked something a little more sensitive (not to mention politically correct) than this image?

What's next?  Changing the toll-free telephone number of the NRO's public relations office to 1-800-CHTULHU?

On the other hand, this isn't the first creepy mission logo we've seen from the NRO.  Consider this one from the previous mission, NROL-38: 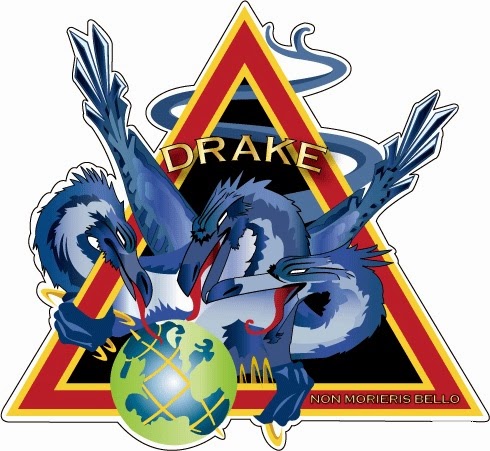 A triple-headed dragon licking the earth?  Verily, the mind doth boggle . . .  Perhaps the NRO is becoming insufferably Sm(a)ug over its success rate?

Well, they certainly let you know what the agency thinks their job is. And the art is pretty good, in the sense that I'd buy a tee-shirt with the design if I were at a Con. But neither suggests a group of people with the Constitution and liberties as their number one priority. (In fact, the second logo would work for the insignia of one of those rapacious eeeevil space mining corporations that show up in Sci-fi every so often.)

ROFL! Yes, it's probably unconstitutional. No, we have no reasonable expectation of privacy anymore.

And that's unlikely to change (short of a nationwide EMP that knocks the entire infrastructure off-line).

The motto of the hydra-headed mission was "You will not die in war"? Seeeeeriously?

well Peter, what's really wrong with the logo? I find it rather amusing and different. The NRO is charged with collecting information and has been since 1961. Some of us who served in the organization believe our work prevented WWIII because the Soviets had a hard time doing things because we could see and hear a lot of it.

As for all this hoopla from Snowden - 1st don't believe all you read. I'm betting a lot of what he has released is out of context. And there is a big difference between collecting and monitoring all those phone calls and being able to generate actionable intelligence from them. 2nd any world leader who doesn't have their intelligence organization monitoring, as best they can, the communications of another world leader is stupid - it's been going on since man could walk upright.

Here's an even larger assembly of the patches: http://www.animalnewyork.com/2013/awesome-terrifying-logos-americas-spy-satellite-missions/

The bear one is the creepiest.

They all seem like a cry for help from some graphic artist trapped in an NRO bunker somewhere.

Might be worth comparing those creatures to the ones described in the book of Revelations in the Bible. Just saying.

ROTFLMAO on the bear one... Creepy? Looks rather childish right?

Well that's because it was designed by an elementary (actually middle schooler) school kid back in 2000.

Read here for what it's all about: http://spaceflightnow.com/atlas/ac157/001204greatbear.html

Haha, that's awesome. I didn't know that about the bear. Those eyes though! It's like it knows what I had for breakfast.