The ancient Greeks used to speak of Hubris:

"... extreme pride or arrogance. Hubris often indicates a loss of contact with reality and an overestimation of one's own competence, accomplishments or capabilities, especially when the person exhibiting it is in a position of power."


Hubris was usually followed in short order by Nemesis:

"... the spirit of divine retribution against those who succumb to hubris ... The Greeks personified vengeful fate as a remorseless goddess: the goddess of revenge."


In today's world, it seems that photographic Hubris is followed immediately by photoshopped Nemesis.  A few days ago, Business Insider reported:

At 3:08 p.m. this afternoon, the White House tweeted out a photo of President Barack Obama, urging people to sign up for health insurance through the Affordable Care Act, that was kind of begging to be photoshopped: 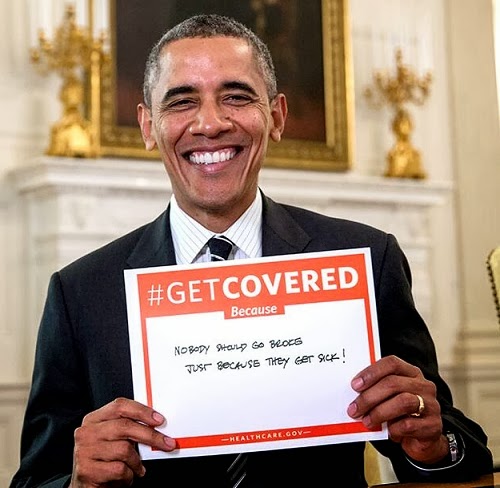 Even funnier, readers at freerepublic.com took no time at all to begin adding their own photoshopped versions of the presidential photograph.  You'll find lots of them at the link.  My personal favorite so far:

Wow, the White House walked right into that one.

It's also just a Bad photo composition wise. (that little bit of mid focus chair, the appalling disparity of focus, the angle, the colors, etc...)
What is constantly amazing me is the sheer ineptitude of everyone surrounding Obama. How do you find that many incompetent people, do you actively Look for them?