The usefulness of IRST


A reader asked me whether the IRST (infra-red search and track) sensors mounted on many modern fighter aircraft (such as the Eurofighter Typhoon, the Russian Sukhoi Su-27 family, the Swedish Saab Gripen and the US F/A-18E/F Super Hornet and F-35 Lightning II) was of any real utility compared to radar and other sensors.  Here's a picture of the IRST sensor (circled in red) on a Eurofighter Typhoon. 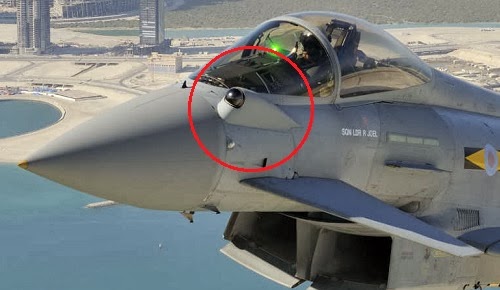 It certainly is useful.  As Wikipedia reports:

These aircraft carry the IRST systems for use in lieu of their radars when the situation warrants it, such as when shadowing other aircraft or under the control of Airborne Early Warning and Control(AWACS) aircraft or Ground-controlled interception(GCI), where an external radar is being used to help vector them onto a target and the IRST is used to pick up and track the target once they are in range.

With infra-red homing or fire-and-forget missiles, the aircraft may be able to fire upon the targets without having to turn their radar sets on at all. Otherwise, they can turn the radar on and achieve a lock immediately before firing if desired. They could also close to within cannon range and engage that way.

Whether or not they use their radar, the IRST system can still allow them to launch a surprise attack.

An IRST system may also have a regular magnified optical sight slaved to it, to help the IRST-equipped aircraft identify the target at long range. As opposed to an ordinary forward looking infrared system, an IRST system will actually scan the space around the aircraft similarly to the way in which mechanically (or even electronically) steered radars work. The exception to the scanning technique is the F-35 JSF's DAS, which stares in all directions simultaneously, and automatically detects and declares aircraft and missiles in all directions, without a limit to the number of targets simultaneously tracked.

When they find one or more potential targets they will alert the pilot(s) and display the location of each target relative to the aircraft on a screen, much like a radar. Again similarly to the way a radar works, the operator can tell the IRST to track a particular target of interest, once it has been identified, or scan in a particular direction if a target is believed to be there (for example, because of an advisory from AWACS or another aircraft).

Here's a video clip of the first day's flight demonstrations from this year's Paris Air Show.  It's taken by a FLIR (forward-looking infra-red) system, alternating between standard photography and infra-red.  Note the highlighted heat sources in the latter images.  I suggest watching it in full-screen mode.

A modern IRST system can detect such heat highlights at up to 35-45 miles range, even if the aircraft emitting them is invisible to the naked eye.  That's pretty impressive;  but even more useful is the fact that it can do so without any emissions that will reveal the presence of one's own aircraft.  The first an enemy may know of your proximity is the arrival of your missiles or cannon shells.