The problem with many bug-out locations . . .


. . . is that they're hard to abandon in a hurry if the modern equivalents of the Huns, Goths and Vandals come over the hill, screaming war cries and brandishing weapons.  This converted Atlas missile silo is a perfect example. 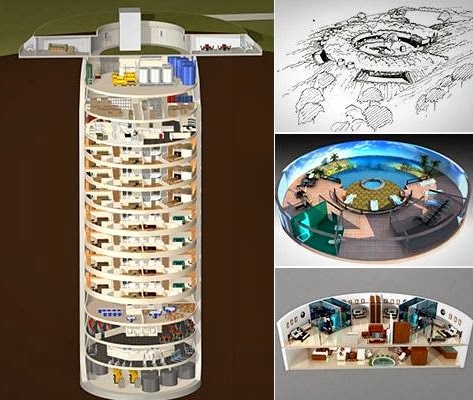 Florida developer Larry Hall is creating a 15-floor complex with facilities and supplies to support between 36 and 70 people for more than five years while off the grid. Residential condos are available in full-floor and half-floor layouts, with a full floor housing six to 10 people and the half-floor housing three to five. Residents have also been promised access to a zero-edge pool with wall mural, hydroponic food-growing area, exercise facilities, classroom, library, a movie theater, surgery center and an in-house dentist/orthodontist. To monitor what’s happening on the outside, the facility also has a Remotely Piloted Vehicle, equipped with light and thermal-imaging cameras and a military grade security system with “both lethal and non-lethal defensive capabilities.”

At $1 million for half a floor, or $2 million for a whole floor to yourself, it's not exactly a cheap option.  It looks even worse when you consider that every single floor is underground (the lowest level is about 140 feet deep), and has no egress to the surface except up through the silo's other levels.  If someone lower down is injured, and no power is available for elevators, it's going to be hard to get them to the surface to evacuate them for treatment - assuming evacuation is a possibility, of course.  (In a major emergency, it may be out of the question.)

Furthermore, in a major emergency, those looking for shelter and supplies will probably know of the existence of this facility, and come knocking at the door, demanding admittance and/or a share of what's stored inside.  Refusal will invite attack.  If intruders occupy the surface buildings, those in the converted silo will be trapped inside.  They may be able to stop the bad guys getting further in, but they won't be able to get out.  Furthermore, if the silo's long-range sensors should become inoperative (and anything mechanical will break down sooner or later), they won't even know that the intruders are coming until they're literally on top of them.

In a real disaster situation, where law enforcement assistance isn't available, intruders would have many options.  If they have enough supplies for a while, they can sit on top and starve out the defenders.  If they need the supplies inside, and are desperate enough to be willing to take casualties to get them, they can fight their way down the interior levels (particularly if they have the means to breach doors and walls, such as dynamite, angle-grinders, etc.).  If they take hostages in the first couple of levels, that will help them 'persuade' those in lower levels to give up without a fight.  If the silo's supplies weren't essential to them, and there was a handy river or dam nearby (and at a higher level), it might not be a major problem to divert the water into the silo and drown everyone inside.  A few sticks of dynamite and/or a backhoe might be all that's needed.

I've written before about why bugging out is not always a good idea or a worthwhile option.  This concept suffers from all those concerns, and adds more.  The silo may be weatherproof, bombproof (except against a direct hit from a bunker-buster or a very near miss from a nuke), radiation-proof, etc.:  but it's not proof against even moderately organized human attackers.  This would not be my first choice for a safe and secure (not to mention cost-effective) bug-out location . . .

Sounds like the plotline to Hugh Howey's Wool series.

Hugh Howey meets Larry Correia. Except the guys from MHI have too many smarts to corner themselves like this. The Feds, on the other hand . . .
"Monster Hunter International, how can I help you? You're where? In a what? And what's outside? Just a moment, please." Puts hand over mouthpiece and calls, "Hey, Uncle Earl, what's the PUFF on rescuing Feds from [list of baddies]?"

Well, it's in Kansas, so there aren't any handy rivers. For that matter, there isn't anything else within miles. I'd rate it as decent, depending on what there was available up top (if they've kept what Uncle Sam had for defenses it should be okay). The problem is what do you do for long-term?

Water in Kansas is becoming a real problem. The agriculture there has already used just about all of the glacier water reservoir under the state, and rainfall isn't enough to grow crops reliably. I believe that base isn't under the Ogallala reservoir, and so the well is over 1000' - not easy to pull water out of without a large power-hungry pump.

If this is the one I'm thinking of, I saw a documentary (on Travel Network?) that showed a fair amount of this site. They have an in-house security team that looks competent, and I'm sure the TV show didn't show everything. The show brought in 2 people to evaluate a few things. The psych person brought up several concerns about cramped quarters, lack of sunlight, etc., and suggested things could last about 3 months before they began to break down. The other person evaluated the air handling (passed), night security (passed), and the approach of a condo owner who was "contaminated" with radiation. He was particularly impressed with the decon procedures, which looked almost by-the-book.

If you study recent military history, fortified positions haven't fared too well. Maybe something a little less obvious would be better.

For one million, I can get both an airplane and a good sized sailboat. With cash left over. And have something I'll actually use on a regular basis.

A question: is this designed to: a)provide a secure facility for those who defer their own responsibilities to someone else, or; b) make lots of money for whomever develops it?

I'd suggest if one discovered what the developer will do with the money he makes from this thing, that would be a reasonable indicator of what one should do personally.

And, to look a little deeper, water availability isn't the biggest concern with this particular design.

What about hooking a few car exhaust to their air vents?