Double "Heh!" with bells on


Courtesy of The Lonely Libertarian: 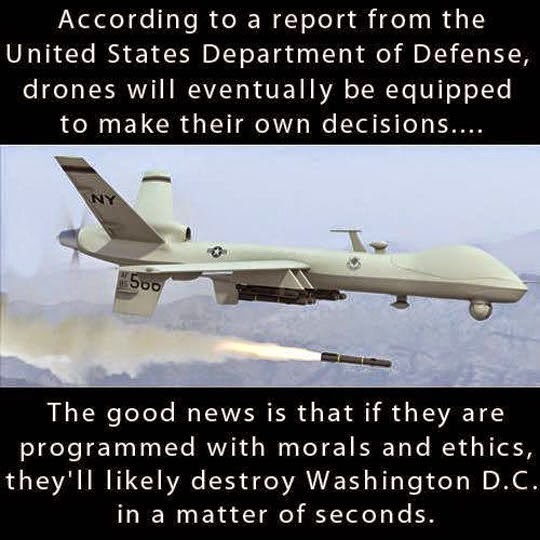 Oh, yeah . . . after the GOP's spineless performance yesterday, that's one artificial intelligence program I can really get behind!

Hi Peter,
It isn’t just that they are funding the Democrats, it’s that they have legalized mass spying on Americans. Just as the Patriot Act legalized a wish list for all illegal actions by law enforcement, this bill has legalized all spying actions by the NSA, FBI, etc.

This is yet another datapoint in the argument of “you must vote Republican, because the Democrats will be worse”. To which I respond, how? It makes no difference whether you go over the cliff in a Porsche, or ox-cart if you are going over the cliff. The point is to go in a different direction.

According to Congressman Justin Amash, Congress just passed a bill which grants the government and law enforcement “unlimited access to the communications of every American”.
When the Michigan lawmaker discovered that the Intelligence Authorization Act for FY 2015 had been amended with a provision that authorizes “the acquisition, retention, and dissemination” of all communications data from U.S. citizens, he desperately attempted to organize a roll call vote on the bill.
…

The legislation effectively codifies and legalizes mass warrantless NSA surveillance on the American people, with barely a whimper of debate.
…

I think they may choose to go golfing.

Can AI controlling a weapons platform be a good idea>

What could possibly go wrong?


All those High-IQ types developing these systems and the low-IQ politicians giving them money should be required to watch the "Terminator" series.

Just one marginally defective microchip that puts out a "1" instead of a "0" every now and then can defeat the best of intentions.

Bob beat me to it. Skynet is coming, and it will not end well.