The Heritage Foundation has just released its report on 'Federal Spending by the Numbers, 2014'.  It makes horrifying reading.  Here are a few of the most important figures in graphical form. 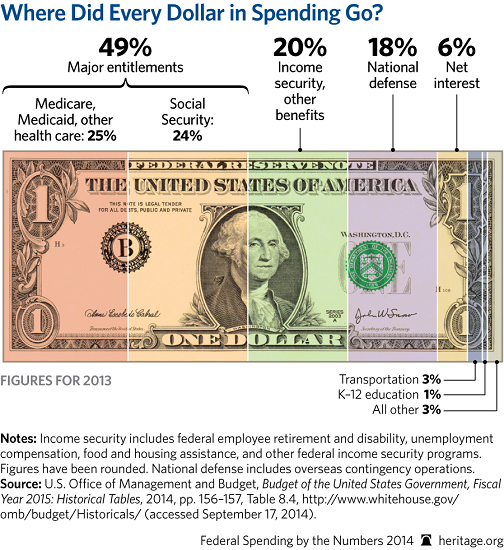 Yes, 69% - well over two-thirds - of all federal government expenditure went to entitlement and welfare programs.  Out of every $3 the government spent, just over $2 was a handout of one sort or another.  Less than $1 went to buy things the country needs. 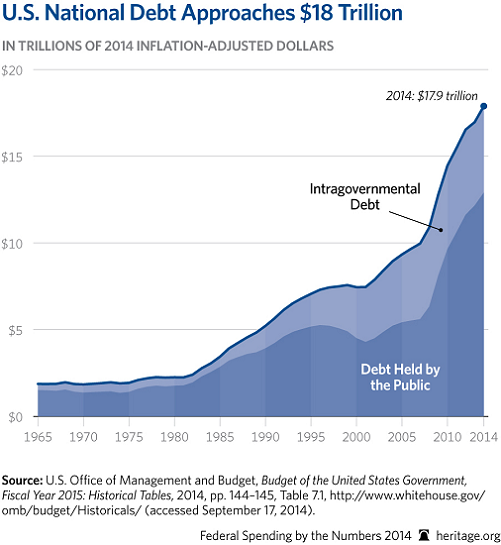 In order to spend all that money on entitlement and welfare programs, the US government is deeper in debt than ever before - and note that this figure does not include future promises to taxpayers, which add tens of trillions of dollars to the debt load, but keep it off the books so that the politicians can pretend it doesn't exist.  That way they can fool the electorate into re-electing them.  If voters understood the true depths of our financial peril, they'd demand the heads of everyone responsible. 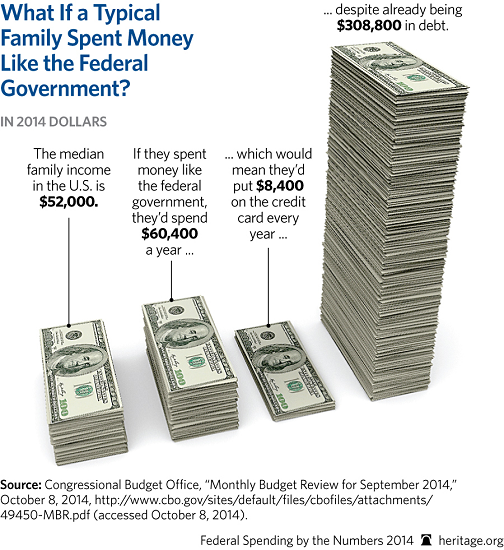 That last graph says it all, doesn't it?

This level of expenditure can only be sustained because the Federal Reserve is pumping newly-minted currency into the economy, with no assets whatsoever to support it;  and it's been buying US treasuries for its own account, using that currency.  Without that, the government couldn't borrow enough money to fund its expenditure.  No-one else would be fool enough to lend it that much money by buying its bonds.  It's been that way for several years already, as we've discussed here before.

The US government is, quite simply, addicted to spending.  It can't and won't cut back on entitlements, because if it did so those who receive them (and have come to depend on them) would vote those responsible out of office at the earliest opportunity, and vote in replacements who'd bring back the 'gravy train'.  Meanwhile, those of us who are working to support ourselves have to support ever more onerous taxes, fees and duties to pay for what the parasites among us so eagerly consume.

I dont know why they lumped certain things together, but I certainly dont consider a retirement plan to be "a handout of one sort or another". It is a benefit that was earned and the gov't made a commitment to pay.

We can argue whether the amount is reasonable (along with the original compensation for the job), or whether certain individuals are gaming the system. I'd rather discuss eliminating 50% of federal jobs (and agencies) as unnecessary.

But if you want to walk away from legal/financial commitments by dissolving all pension plans, well I think that might be considered grounds for, well, whatever they get.

If the social security fund had not been raided with the (cough) promise to pay it back it would change the number a bit. However, it isn't an entitlement it is what those of us who worked paid into without a choice to avoid it. Shake head.

@ Anonymous: Everyone keeps saying that we should make cuts, but no one wants to touch their own pet spending project. Whether it is Defense, Medicaid, or Social Security, it ALL must be cut- in half.
The US government borrows half of what it spends each year. Even if all the government pays is interest on the debt, Social Security, and Medicare, there is no money left for any other government service: not the military, the courts, prisons, none of it.
Every single branch and line item of the federal government's budget must be cut by 50%.
It will never happen, because people keep saying, "Sure, but don't cut X," with X being their own pet project: Social Security, National Defense, whatever.
For that reason, there is only one possible outcome: Our government and economy are going to collapse. It is a mathematical certainty, it is only a question of how long we have.
I think that number is certainly less than 50 years, probably less than 25, and might even be less than 10.
The debt doubles every 6-8 years. When Ford left office, the debt was "only" 700 Billion
When Carter left, 1 trillion.
Reagan, 2.3 trillion
Bush, 3.6 trillion
Clinton, 5.5 trillion
Bush, 9 trillion
and now we stand at 18 trillion.

This only ends one way.

Social Security - whether you like it or not as an idea - is NOT an entitlement!

It is paid FROM me to ME. I didn't approve of the THEFT by politicians and repeatedly told them so over the last DECADES - but stole it they did.

I paid for it.

Social Security was instituted in the 1930's. People could collect it at 65. The average lifespan was 62. People were never meant to collect it at its inception...

To keep it viable, eligibility should have been continually raised between 3 to 5 years after the average lifespan passed.

I disagree with Social Security...I fee I could do much better with that bit of income I'm deprived of every paycheck.

But its not "your" money.

"Your" money gets spent almost immediately.

"The money you expect to collect at age 65 until you die" would have to be paid for by current workers.

Social Security was and is a Ponzi Scheme, as put by P.J. O'Rourke...but Ponzi went to jail. Roosevelt got to be elected President 4 times. The Ponzi is running out of suckers with jobs to pay the people cashing out.

Its closer to a "Bernie Madoff Scheme" at the current time, and at some point, no matter what you've "paid in" you'll get nothing, or paid enough per month to almost buy a can of cat food.

Very few people I know under the age of 40 expect to collect Social Security, because no matter what, its broke. At some point it will go away.

However, most of the people I know who are over 60, and either collecting, or soon to collect Social Security, are very adamant about the whole "I paid in so I deserve" bla bla bla...and trying to explain this concept to them is like talking to a brick wall.

"My" money is paying for current Social Security payments. There is no "lockbox", what goes in goes right back out. And soon, there won't be enough going in to pay for the going back out, so there's a slight problem on the horizon.

SS is most certainly an entitlement. An entitlement is a government program guaranteeing access to some benefit, such as to welfare benefits or tax incentives, by members of a specific group and based on established rights or by legislation.

"entitlement is a poor word to use because it is not specific as to whom is entitled or why. Usually, in this case, a term of derision meaning that the recipient believes himself to be "entitled" to a hand-out or gift that wasnt earned.

Better to use plain language when discussing who gets what from where. SS is not something I am being given or gifted. It is my money that I worked for and earned. It was taken from me, in many cases against my will and promised to be returned in the future. To not return it is theft pure and simple.

As to the timing of it all that is no concern to me. The specific dollar bills that I put in may have been given to someone else and the dollars being returned to me may have been taken from someone other than me. I am not claiming this is a good plan or viable, but until the music stops I want what has been taken from me against my will. When the music does stop then those victims will have to do something about it.