(A quick explanation:  I've often mentioned in these pages goods, services and items that I've found useful or worthwhile.  That's sometimes led to questions from readers, asking for more information or where they can find the products concerned.  Accordingly, I've decided that on an irregular basis, I'll write review articles here concerning products and services that have either greatly impressed or greatly annoyed me.  I hope you'll find them useful.  I will never accept compensation or free product[s] for writing these reviews, even if they're offered, so as to remain impartial.  This is the first article in the series, which you can follow by searching for the label 'Product Reviews'.)


Back in the 1990's I bought two Surefire flashlights for use during weapons training.  One was the Surefire 6P, the first so-called 'high-output' flashlight designed for (and instantly a hit with) law enforcement and first responders.  (It's still available in a slightly refined form.)  The other was the Surefire 6Z CombatLight (now out of production).  It was roughly the same size as the 6P and used the same bulb and reflector, but in a reshaped body better suited to weapon techniques.  Both are shown below, the current-production version of the 6P on top and the 6Z beneath (the first image is from Amazon.com, the second courtesy of FlashlightGuide). 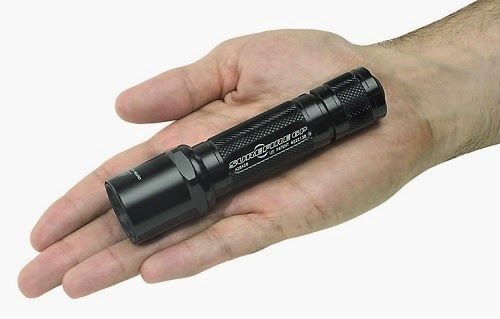 These lights were revolutionary when they were first introduced.  They were relatively expensive compared to conventional flashlights, but offered light output previously unknown in such small devices.  They could produce about 65 lumens for up to an hour using two lithium CR123A batteries.  I remember how amazed I was to see how bright they were . . . but of course, my amazement didn't last long.  Both were soon superseded by bigger, more powerful models, and when the LED revolution came along their battery life, driving incandescent bulbs, soon appeared anemic beside the current-sipping, more modern technology.

I retired my 6P and 6Z several years ago to a box containing other 'backup' flashlights.  A few days ago I was going through some gear and found them again.  I smiled with nostalgia as I handled them, remembering how revolutionary they'd seemed when I bought them;  but then I was struck with a thought.  They've been succeeded by LED models.  Were LED upgrade heads available for them?  A quick online search revealed dozens of possibilities, most appearing to use a LED module from Cree.  There were many customer horror stories about long delays in shipping from China, units not fitting, and failures shortly after installation.  However, there were also a lot of very satisfied purchasers, so clearly one's choice of vendor would be critical.

I spent a while going through customer reviews and checking feedback before I decided to buy two of this conversion unit. 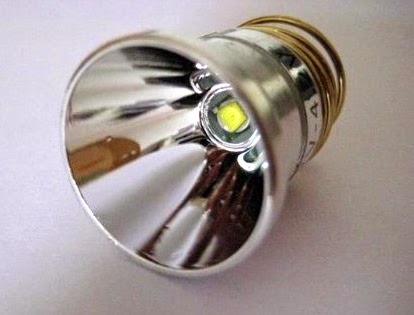 It's offered on Amazon's Prime service, so two-day free delivery was guaranteed (despite horror stories about other vendors shipping similar products by slow mail from China).  Its balance of reviews was generally positive, despite some poor feedback.  Best of all, at only $9.99 each, two of them wouldn't break the bank.  It was advertised as delivering '1,000 lumens', but I knew that would require far more battery power than the relatively small 6P or 6Z flashlights could supply.  I reckoned I might get a couple of hundred lumens out of it if I was lucky.

The units arrived today.  I had to remove the springs at their base, as expected from prior customer comments, but that was a very simple procedure.  They dropped right into place with no fitting problems at all, and have completely transformed my old flashlights.  They used to produce 65 lumens with their original incandescent bulbs, but now I'd say they're at least three to four times as bright.  If their runtime has also been doubled, as many user reviews promise, that'll raise their performance to the level of the current-production Surefire 6PX Tactical model (which costs almost six times as much as these LED heads).  I think this must be the best value-for-money upgrade I've seen in a long time.  I've said as much in my product review on Amazon.com.

If you have an old Surefire 6P or 6Z unit, or any flashlight of similar size and performance, and want to bring it right up to date, I highly recommend this upgrade.  You'll be amazed at the improvement in performance.

Sure, Tony, although it's likely to be a while before I go through the new set of batteries I installed along with the new LED light head.

Yep, I converted all my Surefires to LED a couple of years ago.

I upgraded a number of D-cell Maglites with LED upgrades and found them well worth the money. In fact, the more recent upgrades are definitely more effective (brighter) than the 1st generation LED upgrades of 10 years ago so it is probably worth researching if new LED sets are available for LED torches you bought when they first came out, especially if the torch is a high spec job such as Surefire.

Actually, a note on battery life, I found some batteries were starting to corrode after years in torches even though the LED was giving a full power beam so I now replace the original batteries in my torches every few years.

Ooooo! Shiny! I have a Pentagon MS2-X-TR mounted to my shotgun that would be greatly improved by that little gem. Thanks for the direction!

Ah yes, the venerable 6Z. Bought it for a class at Thunder Ranch in 2001. Amazingly bright for the time. I also have upgraded, bought an LED module from Battery Junction for $19.95. Didn't work and Battery Junction wanted me to pay for returning it. Instead bought one from Solar Force ($14.99 shipped from Honk Kong). Works great and the output is 240 lumens. I'm running the SureFire Combat Ring on the 6Z and homemade tactical flashlight rings on the rest of my lights. Necessary when employing the Graham Method of flashlight manipulation.

@TatendaZim: I was also at Thunder Ranch in 2001. Which course(s) did you attend, and when? We may have run into each other.

5 day course, in September (just after 9/11). There was a Catholic priest (great guy, shooting a 1911 if I recall) and two Deputy Sheriffs from New Mexico. I don't remember any other folks.

@TatendaZim: That was my buddy Father Vic. I sent him there after my first course. We went back together for a rifle course the following year.

Yes, Father Vic. He was to my right in the firing line. I was partnered with a guy I didn't know (to my left). But I spent a lot of time talking to Father Vic. As I said, great guy.

Ask him if he remembers a 6ft/stocky guy with brown hair (with moustache or moustache and goatee - can't remember when I grew my goatee) from Dallas shooting a 1911.

Thanks, Peter, for letting us know about this. Ordered through your link and the part arrived today. Dropped it in my Surefire G2, with batteries that were just barely powering the incandescent bulb, and the new head shone brilliantly.

Next, I dropped it into my Surefire G3, also with used batteries, and it was even brighter.

Ordered two more LEDs for my other lights, and will try them all with fresh batteries when they arrive.

If you happen to find a good LED replacement for a Surefire e2d, please let us know. I'm thrilled to be using my Surefire lights (well, bodies) again, as it's hard to find a good LED light that doesn't have at least four extra useless lighting modes. I love the simplicity of the simple end cap switch.

I ordered two, for my P6 and G2. Removed the big spring, but found that the two blobs of solder interfered with a proper fit. They worked, but I wasn't happy, as they kept the bezel from threading completely. The P6 required the blobs be filed down on the back side, to get the reflector to seat on the end of the body. Didn't have to go completely down to the bulb body. I kept trying the fit, as I didn't want to weaken the solder connection any more than needed.
the G2 needed the solder filed on the sides to match the angle of the base, for body clearance. (slight differences in inside flashlight body profiles is why the filing location varies)

They will light up very bright, with batteries that wouldn't even make the original lamps glow. Forgot to order batteries...Arrgghh!

If you have any of the original Mini-Maglites, there is an upgrade from Nite-Ize, # LUC2-07. This has an LED assembly, reflector, and a tailcap switch. Cost at lapolicegear.com was $8.79, but I'm not sure at Amazon, they seem to have several component kits.

Some complaints about the wobbly switch button in the reviews. What they don't realize is that the button floats, it's not part of the actual switch, so it can remain waterproof.
Don't actually need the switch, the original head rotate on/off still works, but it's nice to have a one hand flashlite. The focus has a short useful travel, and it could have been eliminated, I suspect.

I shelved my Mini-mags long ago, when the Legend brand competitors came out. They had a tail switch. Same size lights, but the parts don't interchange. Couldn't use this kit in them, due to reflector size. Bummer.