This is why NO political party can be trusted


I'm obliged to fellow blogger Maddmedic for putting up a most interesting series of Venn diagrams, showing the relationship between individuals working in (or who used to work in) various sectors of the economy, who then went on to play important roles in Big Government (and often moved from there back into the private sector).

Here's the first diagram, showing individuals who've served in both Big Government and Big Oil.  (Click the image for a larger view.) 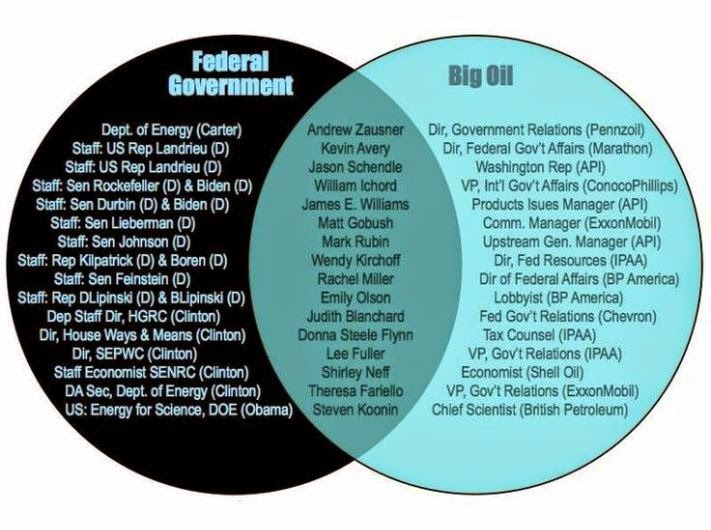 There are many more such diagrams at the link.  They illustrate the incestuous relationship between Big Business and Big Government in a way I've never seen before.  It's an eye-opener.  You want to know why "the will of the people" doesn't ever seem to get taken into account in Washington D.C.?  This is why.  The 'insiders' run things for the benefit of their corporate masters, not according to what the people want.  (They also make sure our politicians stay bought.)

The only complaint I have about Maddmedic's series of diagrams is that they show only officeholders in Democratic Party administrations and politicians' offices.  There are just as many that could be shown in Republican administrations and offices.  This isn't only a Democratic Party problem - it crosses party lines.  It's a Washington D.C. problem.  To reform Washington, we'd have to break every one of these incestuous ties . . . and I don't even begin to know how to do that (or, at least, how to do it legally).

Blokes got a mansion in Hawaii next to Obama's

Same kind of chart for FDA to Monsanto and Bayer and Big Pharma. Gov't merry go round

Thick as thieves them lot

I'd rather have a corp leader than one who is "looking out for the little guy".
either way there is no limit on the lousy outcomes the do givers make, at least with corporate shenanigans one can get recourse.

It is a litlle unballanced to show only (D) in your diagrams....what is the author's agenda one wonders?

In his defense, the Democrats try to pretend that they are for the little guy, while accusing the Republicans of favoring big business. This shows that what I have been saying for years is true: There is no functional difference between the two parties.

If voting actually changed anything, it would already be illegal.

It's the nature of the beast.
If you want the government to regulate large sectors of the economy then you should have experienced people from those sectors in the government (and the companies in those sectors would be crazy not to try to influence those regulations). Unless you want to be governed only by college professors.
What these charts are doing is illustrating that most coaches are former athletes.
Mycroft

A quick Google search shows that many of these people were hired by industry directly AFTER their time in the government. While not technically illegal this flies in the face of your "government needs experienced industry folks" argument and feels more like a "be nice to us and we'll be nice to you, wink wink" scenario.

Feels a bit more like most athletes being former coaches. Obviously a ludicrous idea but pretty much in line with the performance we've been seeing.

Now do the same diagram including Big Unions and Big Lobby-Groups.

It is not about money - despite what many imagine. It is all about POWER, and money is only one of the tools of power.

And people say I'm crazy for being an anarchist! (It means "no ruler", not no rules, or chaos.) The game most certainly is rigged, and it is impossible, given human nature, to keep government small. It's not just that power corrupts, it's that power attracts corrupt (or corruptible) people.

Oh heck try this with the names of the boards of directors for the top 100 companies in the country.