A few days ago I posted a photograph of a hippo that was said to be 'yawning', but in fact was displaying its fighting tusks, signaling the photographer that if he/she came any closer it would be . . . unfortunate.

I've been looking for a better illustration of those tusks to show to a couple of readers who were curious about them.  I found this picture attached to a fascinating BBC report. 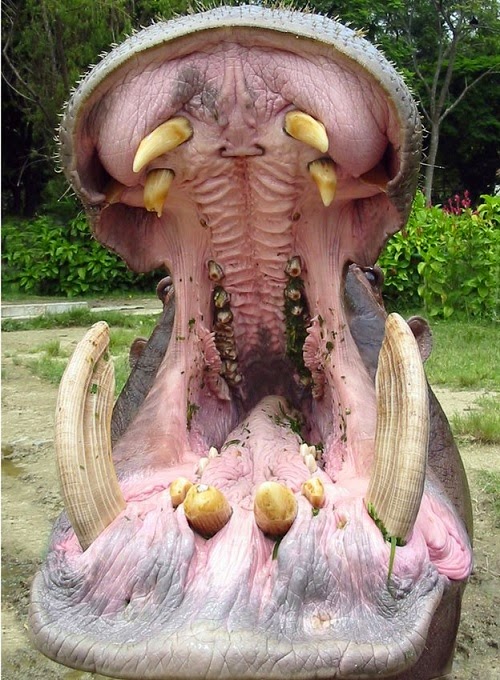 A herd of hippopotamuses once owned by the late Colombian drug baron Pablo Escobar has been taking over the countryside near his former ranch - and no-one quite knows what to do with them.

It was in 2007, 14 years after Escobar's death, that people in rural Antioquia, 200 miles north-west of Bogota, began phoning the Ministry of Environment to report sightings of a peculiar animal.

"They found a creature in a river that they had never seen before, with small ears and a really big mouth," recalls Carlos Valderrama, from the charity Webconserva.

He went to look, and found himself faced with the task of explaining to startled villagers that this was an animal from Africa. A hippopotamus.

"The fishermen, they were all saying, 'How come there's a hippo here?'" he recalls. "We started asking around and of course they were all coming from Hacienda Napoles. Everything happened because of the whim of a villain."

Situated halfway between the city of Medellin and Bogota, the Colombian capital, Hacienda Napoles was the vast ranch owned by the drugs baron Pablo Escobar. In the early 1980s, after Escobar had become rich but before he had started the campaign of assassinations and bombings that was to almost tear Colombia apart, he built himself a zoo.

When Hacienda Napoles was confiscated in the early 1990s, Escobar's menagerie was dispersed to zoos around the country. But not the hippos. For about two decades, they have wallowed in their soupy lake, watching the 20sq km (8 sq mile) park around them become neglected and overgrown - and then transformed back into a zoo and theme park, complete with water slides. All the while, the hippos themselves thrived, and multiplied.

Nobody knows how many there are. The local environmental authority, which bears responsibility for them, estimates between 50 and 60, with most living in the lake at the park. But 12 are known to have paddled past the flimsy fence and into the nearby Magdalena River - and maybe many more.

Here, conditions for hippos are idyllic. The river is slow moving and has plenty of shallows, perfect for larger animals which don't actually swim but push themselves off banks, gliding through the water. Moreover, the region never experiences drought, which tends to act as a natural brake on the size of herds in Africa.

For Carlos Valderrama ... doing nothing is not an option. "We have seen that hippos are very territorial and very aggressive," he says. "They are not a tame animal. The risk for local populations to just leave them to browse around will be huge."


There's much more at the link.  Very interesting and highly recommended reading.

Back in 2008 I wrote about a Mexican drug lord's private zoo, but that seems to have been a minor affair compared to Pablo Escobar's menagerie.  According to the article, there may by now be well over a hundred hippos spread along more than a hundred miles of Colombia's Magdalena River - and there are no predators such as crocodiles to keep down the numbers of young hippos surviving to maturity.  Within a few decades that nation's rivers may rival those of Africa in terms of hippos per mile.

I wonder if we could relocate some of them to the wetter parts of the Rio Grande, the river that separates Texas and Mexico?  That would certainly cut down (literally) the number of illegal aliens trying to cross . . .

Seems like they could open up big game hunting to keep the numbers down. Not sure how hippo steak would taste, but since they are grass eaters probably close to beef I guess.

I don't know about hippo steaks, but I'm here to tell you, hippopotamus stroganoff is to die for.

I read that hippos kill more people then crocs do in Africa. I know they can out run people in short distances. But I'm all for hippo BBQ