. . . more's the pity!  I'm losing weight slowly but steadily on a high-protein, low-carb diet, so I can't sample the Thanksgiving poutine recipe I just found on BuzzFeed.  I haz a sad . . .

For those who've never sampled the delights of poutine, here's an introduction from Australia's Traveler online magazine.

Montreal's La Banquise is famous for one thing: that mess of chips [fries, to US readers], cheese curds and gravy known as poutine. No wonder there's a queue snaking right out the door and down the street on a Friday night. The 24-hour greasy-spoon in the bohemian Plateau Mont-Royal neighbourhood is on every poutine lover's radar because it serves an extraordinary 31 varieties. Here, you could order the standard-issue La Classique – but why would you when chips can come slathered with everything from pulled pork, slaw and sour cream (La Boogalou) to that other Montreal culinary obsession, smoked meat (L'Obelix)?

Many regulars swear the best variation is La T-Rex, which piles beef mince, pepperoni, bacon and sliced hotdog sausage onto the chips and curds. Who am I to argue? 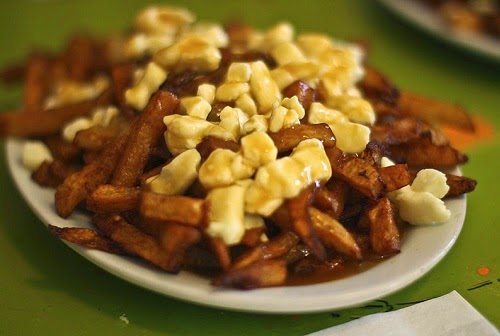 But who came up with the crazy idea for poutine in the first place? Its origins are contested but a widely accepted version is that it started in 1957 in Warwick – a town between Montreal and Quebec City - when a takeaway customer asked a chef to pop his squeaky cheese curds and fries into the same bag. Gravy was later added to soften the curds and - voila! - poutine was born.

In Quebec City's hip Saint-Roch neighbourhood, I resist a pub spruiking poutine with pork leg and mustard sauce. But I'm intrigued when I find "mountain poutine" on the menu at The Fairmont Banff Springs in western Canada. The skillet of chips is layered with pulled pork, the whole lot slathered with a smoky speck gravy. It's good – but not great. "Is this cheese … mozzarella?" I ask my waitress. When she confirms my suspicions about the "curds", I sit back with satisfaction. I'm now officially a poutine connoisseur.

Damn, I'm hungry after reading that!

Labels: Boys and their toys, Food and Drink, Warm Fuzzy Happy Stuff
Email ThisBlogThis!Share to TwitterShare to FacebookShare to Pinterest

Canada's cardiologists thank Peter for his contribution to their returement funds.

I miss that stuff. I was 300lbs last Dec. 210 today. I do get some carbs, but set a hard calorie limit, and they leave me hungry at night, so I tend to murder a pound of chicken and a couple of heads of lettuce a day.