The lighter side of Christmas


I said the important things about Christmas last night.  There's also the fun aspect, which has been brought out by a number of posts and articles.  Here are a few that have tickled my fancy.

If each house places a 200ml glass [about 6½ oz.] of semi-skimmed milk and a mince pie by the fireplace, Santa drinks 148m litres [over 39 million US gallons] of milk -- enough to fill around 60 Olympic-size swimming pools -- and eats 740m mince pies during his shift.

As there are around 250 calories in a mince pie and 100 calories in the glass of milk, Santa consumes 259bn calories on Christmas (and that’s before he goes home to his turkey leftovers).

To burn that off so he can squeeze into his suit again the following Christmas, Santa would have to run for 1.5bn miles.

MSgt. B. shares some Christmas thoughts and images, including this one: 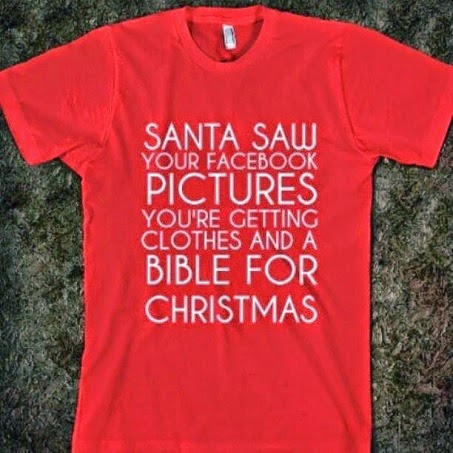 There are more at the link.

Mr. Garabaldi has three good blog posts about 'Christmas tidbits', as he calls them:

World War I began in 1914.  That year saw the famous 'Christmas Truce', in which British and German soldiers came out of their trenches to fraternize in No-Mans-Land and play a famous game of football. This year - the centenary of the occasion - a number of re-enactments of that game have been held, but the one that caught my attention was between British and German troops serving in Afghanistan.

I wonder whether any of the participants' great-grandparents played together between the front lines a century ago?

I'm sure most of us are familiar with the famous poem " 'Twas the Night Before Christmas ".  My fellow author and columnist at Mad Genius Club, Kate Paulk, has celebrated the season by penning a new version of the poem, "as edited by a Social Justice Warrior".  Here's an excerpt.

Twas the sleep-preferred diurnal period before the non-denominational winter celebration, when all through the dwelling place
Not a life-privileged thing was stirring, not even a member of the species mus musculus.
The gift receptacles of choice were placed by the designated location with care,
In hopes that a culturally appropriate giver of gifts soon would be there.


There's more at the link.  Giggle-worthy for the not-politically-correct (such as yours truly).

A furniture store in Bangor, Maine, has responded very appropriately to complaints by the grinch-minded concerning its seasonal displays.  If I weren't over 1,300 miles away by road, I'd make a point of driving there to buy something to express my appreciation.  May I suggest to any of my readers living near the store that they might like to consider doing so on behalf of the rest of us?  Thanks.

Finally, cartoonist Randall Munroe has his own inimitable take on Christmas.  (Clicking the image will take you to the XKCD home page.  It's one of my regular cartoon reads.  Highly recommended.)