Two questions from the AR-15 project


I've written at some length about my ongoing project to upgrade and repair a few older, poor-condition AR-15 rifles and carbines for some disabled students and friends of mine.  The most recent post in the series is here, and it contains links to earlier entries.

As a result of this series, I've fielded a number of e-mailed questions from readers about their AR-15's, or what AR-15 to buy, and related issues.  I thought I'd take some time to answer the two most-often-asked questions, in the hope that they'll be of wider interest.  The answers I give are based on my experience and training (which are nowhere near as extensive as some), with (hopefully) a smidgen of common sense thrown in.  I've no idea who first said "Opinions found on the Internet are worth what you paid for them", but there's a certain amount of truth in the saying.  Those who know more than I about the subject are invited to contribute in Comments.

Oy gevalt . . .  Wrong question.  Your first question should be, "Why do I want an AR-15?"  If it's for fun and games with friends and firearms (which I enjoy as much as the next person), almost anything will do.  If it's for serious competitive use, what are other competitors in your chosen field using, and why?  You won't go far wrong by emulating their choices.  If it's for self-defense, is it even appropriate to consider a rifle?  If you live in a heavily urbanized suburb, in (say) an apartment, your defensive needs are very different from someone living in suburbia, or on a small farm on the outskirts of a city, or on a cattle ranch in the West.  There are rifles, and shotguns, and handguns, and other defensive measures as well.  Any of them, or a combination of them, may be better for your needs than an AR-15.

Your choice of firearm will be defined by what you want it to do.  Once you've decided that, and if an AR-15 is the right firearm for your needs, then you can start narrowing down the field.  If you expect to have to maneuver in tight, confined spaces, a long rifle is not a good idea - a shorter carbine might be preferable.  On the other hand, if you expect to take shots over three to four hundred yards, a longer-barreled rifle is probably a better choice than a carbine.  In the same way, a red dot sight is great for close-quarters combat, but a telescopic sight is much more useful for long-range work.  If you want to hang a lot of accessories off it (of which more below), a quad-rail handguard will be very useful;  but if you want to follow the KISS principle (my personal preference), something like a Magpul MOE handguard or the 'classic' round style might be more appropriate (not to mention affordable).

Only after you've decided all those questions should you start looking at actual brand names.  You can soon enough find out which suppliers can offer you what you want, or at least a basic rifle that you can customize to your heart's content.  Personally, I'd stay with the more reputable suppliers, even though it'll cost you more money.  In 'consumer-level' brand-name AR-15's that means (for me) Colt, Ruger, Smith & Wesson, etc.  Their present prices range from about $700 to about $1,200.  Moving upmarket, outfits like Bravo Company, Daniel Defense, Noveske, Troy Defense, etc. offer premium weapons at premium prices (anywhere from $1,500 to $3,000 or even more).  If I were on a tight budget right now, my first choice would be the Smith & Wesson M&P15 Sport entry-level model, which is currently available for around $700 retail.  If I had a little more, I'd buy the Colt 6920 base model, which can be had for under $1,000 from some retailers if you shop around.

Again, oy gevalt . . .  Let's not get ahead of ourselves.  First things first.

Any rifle is going to be only as good as its operator.  You can have the world's finest, highest-quality, accessorized-out-the-wazoo weapon, but if you can't shoot fast and straight, it won't do you much good.  Therefore, the first 'accessory' I recommend is to buy eight to ten quality magazines and a thousand rounds of quality training ammunition.  In both cases I emphasize the word quality.  Cheap crap won't do.  If you're going to bet your life on your rifle, you need magazines that will feed it reliably;  I recommend Magpul or Troy Industries products on the basis of my own experience.  They've got to contain ammunition that won't foul your chamber or gas system and will shoot straight.  Cheap steel-cased ammo like Tula or Wolf uses dirtier propellants, is often relatively inaccurate (3-5 MOA), and can be hard on your extractor.  Low-cost brass-case 55gr. M193 military ball or its civilian equivalents will be about 20% more expensive, but shoot cleaner and be more accurate (2-3 MOA).  Current military ball (e.g. Lake City 62gr. M855) is about 20% more expensive again.  In terms of brand names, brass-case ammo from any US manufacturer (e.g. Federal, Remington, Winchester, etc.) will be acceptable, as will overseas suppliers like IMI (Israel), Prvi Partisan (Serbia) and Sellier & Bellot (Czech Republic).  I've used all those brands and found them OK.  Do an Internet search when you're ready to buy ammo in bulk.  You can get it a lot cheaper that way, and sometimes get metal ammo boxes, stripper clips, etc. into the bargain.  There are lots and lots of suppliers competing for your business.

Next, you need training.  Not everyone can afford the $2,000-$4,000 cost of a week-long rifle or carbine training course (the course fee may be much less than that, but you've got to factor in travel, accommodation and ammo as well).  Weekend courses are often cheaper, but by the time you add up all the expenses they can still cost you several hundred dollars.  For a start, I recommend buying one or two good instructional DVD's on the use of a rifle for tactical or defensive purposes.  There are dozens available, but if you want just one thoroughly competent introduction to the defensive use of the AR-15, I recommend Pat Rogers' Basic Carbine DVD.  The man knows whereof he speaks.

Now, as to accessories on the weapon itself.  Let me be as clear as I possibly can:  SIMPLE IS BETTER.  The more things you have to worry about on your weapon, the less likely you are to be able to focus on running the gun and stopping the fight!  You need a good, solid set of iron sights to start with, even if you plan to use a red dot or telescopic sight.  The optical sight comes next;  and you may want to mount a light and/or laser, depending on your operating environment.  However, I can't stress too strongly that you need to use up your first thousand rounds of ammo training in the basics of handling, loading and accurately shooting your weapon.  Once you've got those right, start worrying about optics and lasers and lights.  Learn to walk before you try to run!

In particular, don't be a 'geardo'.  Don't turn your rifle into what's called a 'rooney gun', like this one. 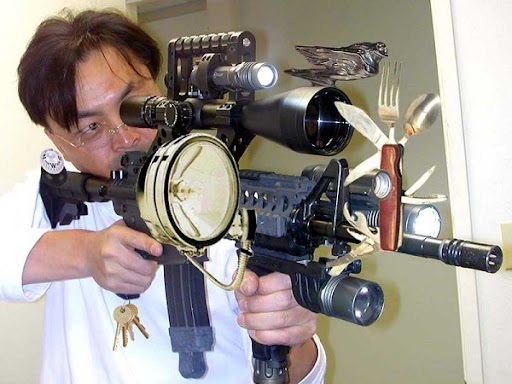 You can hang a light, a laser, a night vision device, a bipod, a multi-function spork, a battle mug and a tactical bottle-opener on your rifle if you want to . . . but whether or not you need them (or are good enough to use them effectively) is another matter.  Advertisers love to label everything as a 'tactical' accessory, when in fact most of them aren't worth a damn when the crunch comes.  Learn to do the basics well, and only then add the equipment you need to do them better.  I've never forgotten the words of a grizzled Sergeant-Major when I was a raw recruit:


Practice (initial and ongoing) will do far more for you than any number of accessories.


I hope these answers help.  I'd be grateful if readers with relevant training and experience would please add their own advice in Comments.

A suggestion, once you have decided to buy an AR rifle, try to buy the rifle with the sights, handguard, grip, and stock that you are going to use.

You do not want to buy parts of your rifle twice, if you are going to buy the rifle and then change to a MOE handguard, grip, and a different brand (or color) of stock, and you plan on changing your iron sights to folding sights you pay for each part twice.

And coincidentally, on Monday the USPS dropped off the pistol upper. Now we await the brown truck bringing the pistol buffer, the BCG, and the charging handle.

And you can tell people that are buying an AR that in most cases they are buying their first AR. They won't believe you, but it is true nevertheless.

In regards to training, see if there is an Appleseed class near you. Usually excellent basic rifle training.

As for manufacturers, you didn't mention two excellent manufacturers who offer relatively low-cost but high quality rifles and stand behind them if things go wrong: Bushmaster and Rock River. These two are my preferred suppliers for those reasons.

As for training, you can never get enough, which is why I advocate finding a rifle or carbine course somewhere every year and taking it; you can always learn something new or refine something better. And the Civilian Marksmanship Program offers an excellent two-day Small Arms Firing School during the National Matches where Army Marksmanship Unit professional shooters coach you on the M-16 platform and teach you all of the solid basics like position shooting, sight picture, sling use, etc., for under a hundred bucks, ammo included.

Learn to properly clean and lube.

Magpul's Art of the Tactical Carbine DVD is also a good watch for those who have fired their 1,000 rounds and are looking to learn / watch some more advanced techniques.

A discussion about caliber choice might be in order here.
If you already have multiple purpose-built rifles in various chamberings, this may not apply to you.
For me, the choice boiled down to 5.56 or 7.62X39.
Since the .223 is basically a rodent/varmint cartridge I chose the AK round, for numerous reasons.
The two main problems that crop up when using the X39 in an AR:
Feeding issues- Usually traced to the mag. Case body taper of the X39 case requires a curved mag, especially on std. capacity mags.
Tweaking the feed lips and follower may be required, and possibly the ramps on the barrel extension. There are now hybrid lowers available that accept AK mags, these may not be ideal if switching uppers.
The other issue is potential bolt failure at case head surround area . This due to the thinner wall in this area necessitated by the larger case head dia. of the X39.
I used a Cason Engineering BCG on my AR and am very pleased.
The carbine is built on Aero Precision upper and lower, carbine length DI gas system on a mid weight barrel, milspec buffer, Magpul MOE furniture.
This was built as a general purpose, not an all-purpose rifle, in the interest of simplicity. (The AR is already complicated enough...)

For others interested in an X39 AR, check out Cason Engineering, and Liberty Gun Works, for parts, as well as complete custom builds.