I'm almost - but not quite - speechless at reading of a new book that's about to be published, and a film deal that appears to be in the works.

IT is a truth commercially acknowledged that Jane Austen’s high-spirited heroines can be recast as Hollywood brats or Bollywood sirens, wittily navigating the eternal perils of class, romance and unworthy men.

Few challenges, however, are as unusual as the latest foe facing Elizabeth Bennet of Pride and Prejudice – a plague of the undead sent to reduce the picturesque villages of Longbourn and Meryton to smouldering ruins. 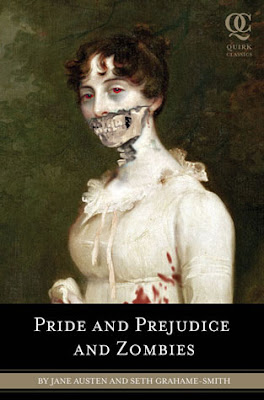 Hollywood studios are bidding to turn a radical reworking of Austen’s most popular book, now called Pride and Prejudice and Zombies, a parody to be published in April, into a blockbuster movie.

The idea of mixing different genres has spread from pop music, where old tunes are merged to make fresh hits, to the internet with fan homages such as Lizzie the Vampire Slayer, where Bennet is transported into the world of Buffy the Vampire Slayer.

The forthcoming novel is the first mainstream “mash-up” of Austen and horror, two of the most popular film genres of the past decade. It has been made possible only because Austen is out of copyright.

This weekend Seth Grahame-Smith, the author of P&P&Z who is based in Los Angeles, revealed how he and an editor at Quirk Books, an independent publisher, developed a diagram tracing connections between seminal period novels to cult movie genres, including robots, vampires and aliens.

“It quickly became obvious that Jane [Austen] had laid down the blueprint for a zombie novel,” said Grahame-Smith, a television comedy writer. “Why else in the original should a regiment arrive on Lizzie Bennet’s doorstep when they should have been off fighting Napoleon? It was to protect the family from an invasion of brain-eaters, obviously.”

From then on it was easy to imagine Bennet and her four sisters as zombie slayers, trained since childhood in the deadly arts of Chinese kung fu, and Fitzwilliam Darcy as a promoter of the socially superior ninja skills of Japan. Together they stand bonnet to epaulette against a plague of cannibalis-tic interlopers from the accursed city of London.

Other talent agencies are pitching their own slate of monster-lit titles. They include a version of Emily Brontë’s Wuthering Heights, where Catherine, the deceased heroine, returns as a Japanese-style ghost not only to haunt but also to terrorise Heathcliff.

In a reworking of Charlotte Brontë’s Jane Eyre , M r Rochester has something more terrible than an insane spouse in his attic, and a version of George Eliot’s The Mill on the Floss is powered by human sacrifice.

Verily, the mind doth boggle . . . As the Sci-Fi Wire put it: "Can you imagine? Colin Firth's Mr. Darcy with a shotgun blasting zombie heads? Keira Knightley's Elizabeth with her face rotted off? Oh, the possibilities."